News and EventsGeneral News“Whatever is to be Performed or Endured”

“Whatever is to be Performed or Endured” 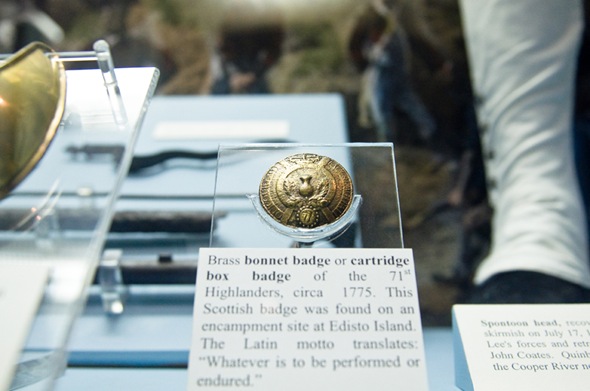 Many of the artifacts in The Charleston Museum’s collections have fascinating stories behind them. Among them is the British 71st Regiment cartridge box badge in the “Becoming Americans” permanent exhibit. Such badges frequently adorned Revolutionary era cartridge boxes, which were leather pouches used to carry soldiers’ ammunition. The metal decoration, generally a copper alloy, usually included the number of the regiment that the soldier belonged to and other embellishment such as the unit’s motto. The 71st’s badge, for instance, includes a thistle, symbolic of the unit’s native Scotland, and the regimental motto in Latin: Quicquid aut facere aut patee which translates to “whatever is to be performed or endured.” What is particularly intriguing about the Museum’s example is that we can isolate the exact week in which it was lost during the Revolutionary War.

The 71st Regiment saw extensive action in South Carolina during 1779-1781. Raised in the highlands of Scotland, recruits for the regiment were rugged men who were used to living a tough existence. Originally, they were issued kilts and carried broadswords. Neither of these saw much use in America. The heavy broadswords were difficult to carry in the rough terrain of North America and were soon abandoned. The kilts, meanwhile, seem never to have been issued. Early in the war, the regiment’s shipment of kilts was captured by American privateers; the garments were subsequently given to the Continental Army for use as blankets.

The 71st was involved in the Southern campaigns from beginning to end. A detachment assisted in the capture of Savannah from the Americans in December 1778, while another detachment was captured by patriot forces at Yorktown in October 1781. In the interim, they participated in almost every major action in South Carolina. It was the relatively unrecognized campaigning in 1779 in the South Carolina Lowcountry, however, that is the focus of the story surrounding the Museum’s cartridge box badge.

The piece in the Museum’s collection was found by Mr. Jack Boineau, a former member of the Museum’s Board of Trustees, while walking on a beach on Edisto Island in 1966. The specific area is now called Point of Pines and is on the northeast end of the island along the North Edisto River. How did it end up on this remote beach?

After the capture of Savannah, British forces under General Augustine Prevost attempted to secure their hold on Georgia. In response, American commander General Benjamin Lincoln crossed his army to Augusta in April 1779 to prevent them from driving into the Georgia backcountry. Rather than engage Lincoln directly, Prevost gambled by crossing the Savannah River and marching toward relatively undefended Charleston. Among his troops were the 71st Regiment.

Alarmed by Prevost’s quick descent on the city, the civilian authorities panicked and offered South Carolina’s neutrality for the remainder of the war if the British would spare the town. Fortunately, Prevost insisted on dealing only with the garrison’s military officers, and General William Moultrie, the senior officer in the city, boldly announced to him that they would “fight” and defend Charleston. After receiving word that Lincoln was returning from Georgia, the British army retreated to James Island and Johns Island.

In early June, Prevost began a slow march toward Beaufort. Lincoln attacked the British rear guard, which resulted in the bloody Battle of Stono Ferry on June 20. The 71st Regiment was in the thick of the fight and played a key role in driving off the attacking American force. After Stono Ferry, the British advanced uncontested, encamping at various points on the sea islands between Charleston and Beaufort. An unknown British officer sketched a map of the campaign which is now in the Sir Henry Clinton Papers at the University of Michigan’s William L. Clements Library. The map shows Prevost’s army encamping on the northeast end of Edisto Island from June 28 to July 4. The encampment site is precisely where Mr. Boineau found the Museum badge. While the 71st Regiment returned to the Charleston area the following year during the siege of the city, they were not posted near Edisto Island. It seems almost certain that one the unit’s soldiers lost the badge while on Edisto during this seven day period in 1779.

Fortunately, the owner of the property on which the badge was found agreed to donate the piece to The Charleston Museum where it has resided ever since. For years, it was thought to be a bonnet badge which one of the Scottish soldiers wore on his bonnet, but the fact that it is a heavy casting and has attachments appropriate for leather rather than cloth confirm that it is a cartridge box badge.

The Museum is privileged to have such a piece since only two other examples are known to have been found in South Carolina; one came from Camden battlefield and the other was found in the Savannah River. As for the soldier who lost the decorative device, he most likely continued to “perform” and “endure” without it.

Related:
See it for yourself! The 71st Regiment cartridge box badge is on permanent exhibit in the Museum’s “Becoming Americans” section of our second hall. While you’re here, be sure to check out the Royal Artillery cartridge box in the same case. It is one of the best-preserved examples of a Revolutionary War cartridge box. 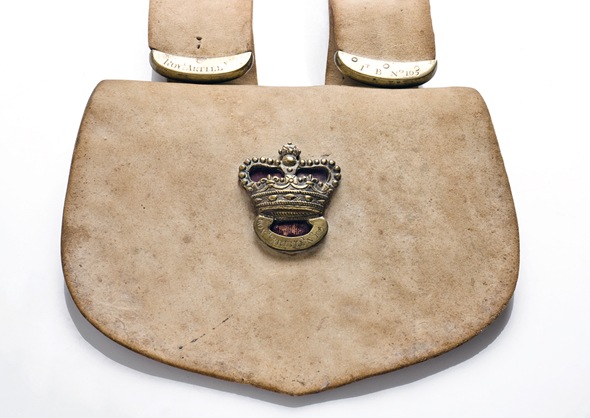