The Centennial of Armistice Day 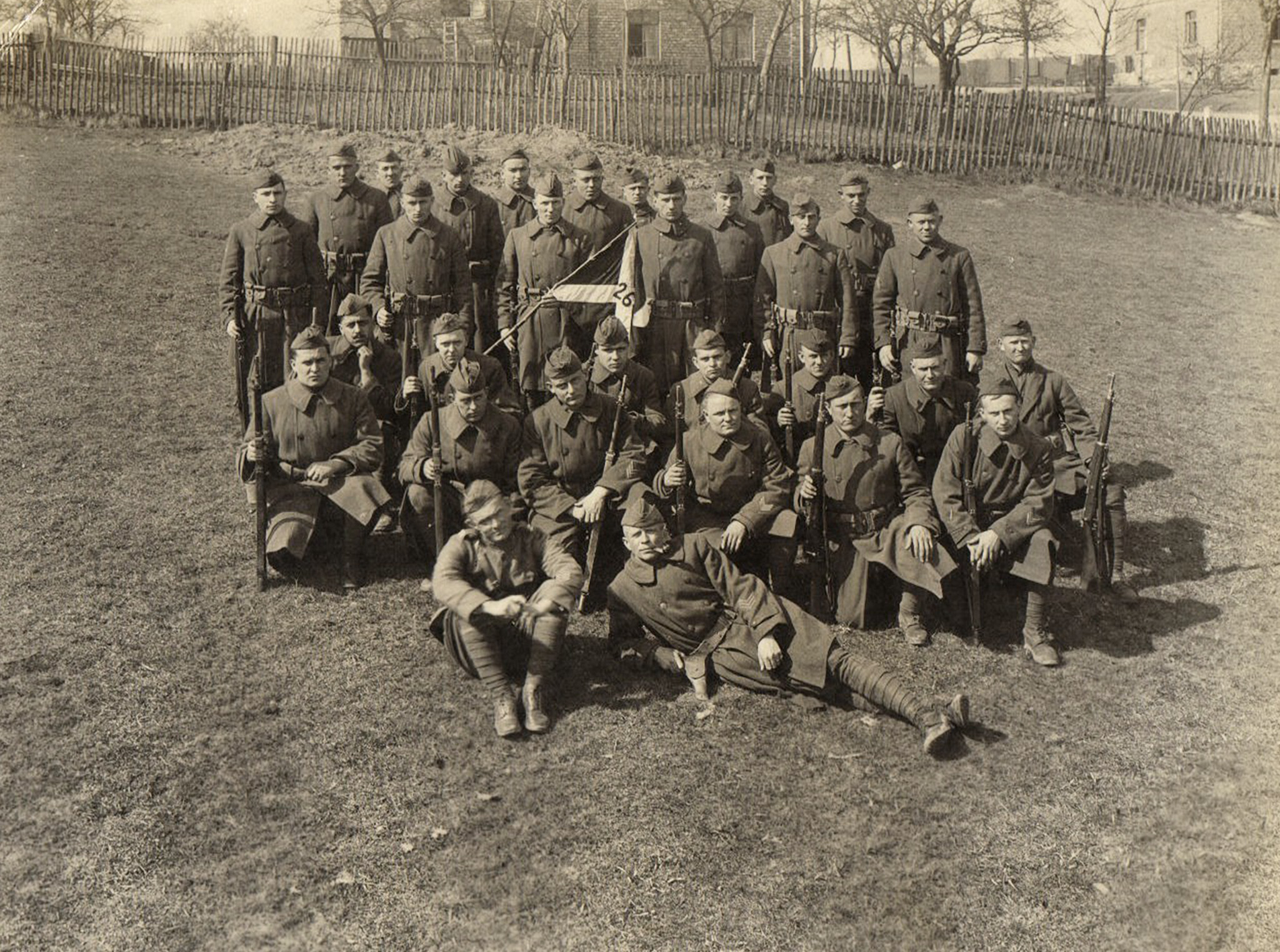 Black and white photograph of a group of soldiers belonging to the 26th Infantry, 1st Division. 1919.

“The Armistice was signed this morning.” wrote President Woodrow Wilson on November 11, 1918. “Everything for which America fought has been accomplished; it will now be our fortunate duty to assist by example, by sober, friendly counsel and by material aid in the establishment of just democracy throughout the world.”

In Charleston, The News and Courier printed its November 12, 1918, front-page headline in letters understandably larger than its own masthead. There was, of course, good reason to cheer. In just a year and a half, what was once considered a strictly “European crisis,” had killed 116,516 U.S. soldiers and wounded some 204,000 more–1,095 of them South Carolinians.

Wilson, having grown up in Columbia and Augusta, knew what this state and, indeed, the rest of the country had risked in April 1917, when, left with little choice, he reversed his isolationist pledge that heretofore had kept the country out war. His hand forced by German submarine attacks in the Atlantic and a possible collaboration between Axis powers and Mexico, Wilson and Congress mobilized American troops in April 1917.

The decision near-instantly divided the state. Locally, Charleston American publisher, John P. Grace, wrote so aggressively against U.S. military involvement in the war that the U.S. Postal Service refused to deliver any of his newspapers until he lightened up on his anti-Allied editorials. As images of a barbaric and “brutal Hun” emerged from pro-war propaganda Charleston’s sizeable German population, anchored by the German Friendly Society, took to the streets to hold rallies.

Politicians harangued one-another ceaselessly, one calling pro-war Governor Richard Irving Manning III “the worst governor the state ever had…trying to steal the souls and bodies of your boys.” Fiscally conservative officials decried the nation’s seemingly uncontrolled spending after The News and Courier printed that war expenditures by late summer of 1917, had “mounted to more than $24,000,000 every twenty-four hours.”

Making matters worse, South Carolina initially struggled with the growing military demands of America’s war machine. The country’s new Selective Service Act, or “draft law,” required over a quarter-million male South Carolinians age 21 to 30 to register no matter his feelings for or against the war. A generalized “patriotic fervor” (some of it spurred by the State Council of Defense’s South Carolina Handbook on the War that wholesale labeled anyone not in favor of the war a “traitor to the American Spirit”), enthused thousands more to join up. The state was simply not prepared for numbers that high. Facilities at Parris Island and Charleston’s navy base quickly overreached capacity. Three additional Army training centers–Forts Jackson (Columbia), Wadsworth (Spartanburg), and Sevier (Greenville)–had to be hastily built. Opened in May 1917, all three were housing droves of draftees within a month. Equipment necessary to train soldiers was, in a word, inadequate, as one recruit wrote to his mother, “we are short of just about everything.”

Still, those locals who answered the nation’s call to arms did so selflessly. In Charleston, the Washington Light Infantry mustered just as it had for generations going back to 1807. On July 25, 1917, it embarked for France attached to the 55th Field Artillery Brigade. Many other thousands of South Carolinians went to the front as well. Most local white males entered service either as members of the 30th (“Old Hickory”) or in the 81st Infantry (“Wildcat”) divisions and saw intense, desperate, and bloody action during battles at Ypres, Somme, and Meuse-Argonne.

Of considerable note, also, were the members of the 371st Infantry Regiment, comprised entirely of African-Americans. A segregated unit in the states, it was transferred to French command immediately upon arrival in Europe. By Armistice Day, however, it had been twice decorated, first with the Croix de Guerre, and then the esteemed Order of Légion d’Honneur. One member, Corporal Freddie Stowers, from Sandy Springs, was killed by machine gun fire on September 28, 1918, while taking a hill in the Ardennes. Seventy-three years later, on April 24, 1991, President George H.W. Bush posthumously awarded Stowers the Congressional Medal of Honor.

Back home, whatever lingering feelings South Carolinians still had against the war softened considerably thanks to an accelerated state economy. Cotton prices, for example, still somewhat wrecked by the Civil War, escaped wartime regulations put on wheat and other essential commodities. As a result, profits from its unrestricted sales skyrocketed alongside the frantic need for military textiles such as uniforms and tents. Still, there were shortages. Fuel was rationed and each Monday in South Carolina was deemed “heatless”–just in time for one of the state’s coldest winters on record. 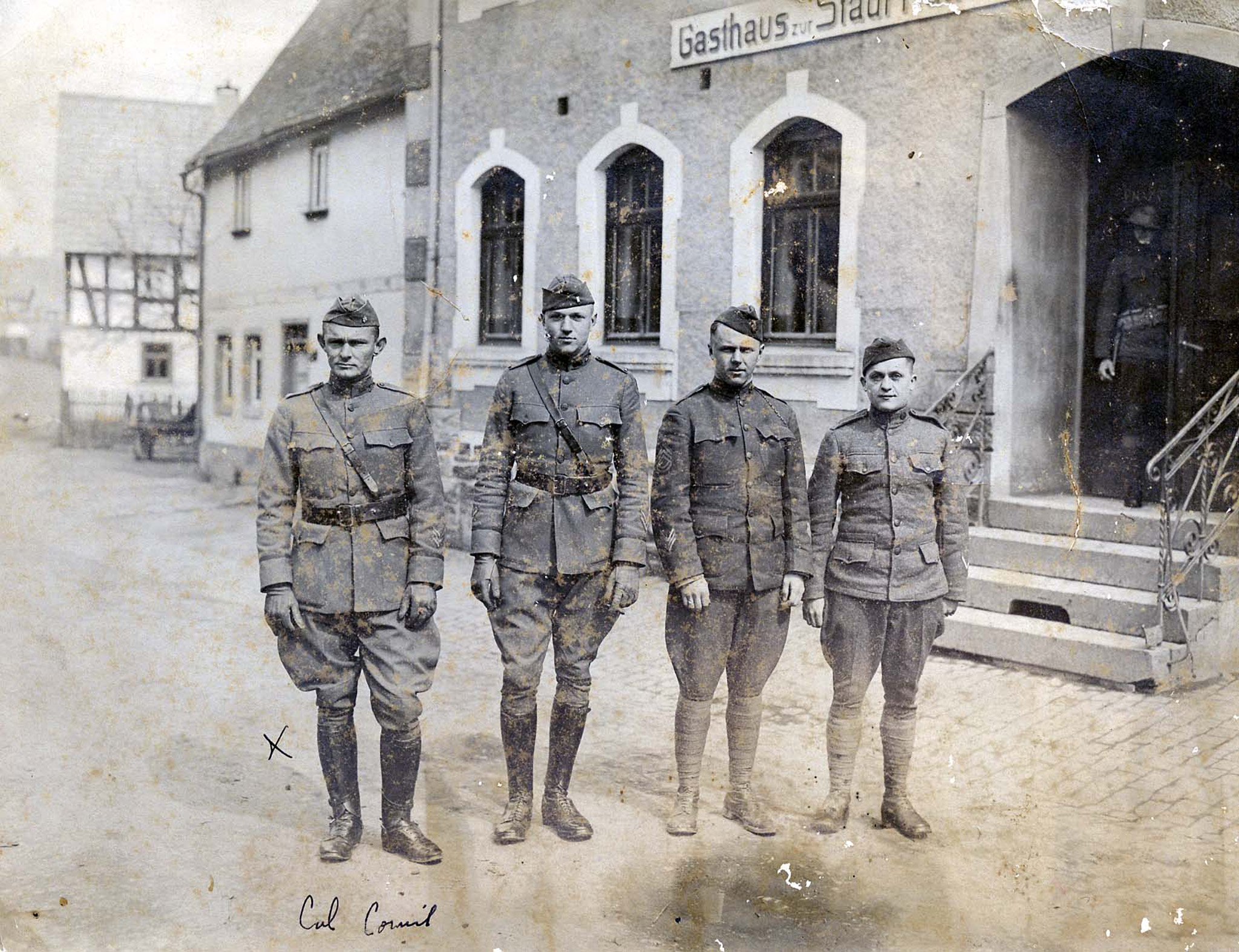 By autumn 1918, the German war effort, at long last, began to unravel. Massive and widespread allied offensives advanced all along the Western Front. On November 5, The News and Courier announced that American pilots “have brought down in three days 124 German airplanes. A separate article further stated that French and American forces north of the Argonne had blocked the “Setany Gap” and thus closed off the only realistic line of retreat for the German Army. In addition to its staggering battlefield losses, Germany also began crumbling from the inside out. What had started with internal revolts by sailors grew to an all-out mutiny by the rank-and-file. From there, German anger and frustration toward the war spread rapidly through all branches of its military and into the general public. Now, the German monarchy, as well as its military, was doomed.

With a formal armistice declared on November 11, 1918, Charleston, along with every other community throughout the country, rejoiced. Mayor Tristam T. Hyde publicly requested that “everybody in Charleston lay aside all thought of business…that all retail establishments close their doors for the whole day [and] join wholeheartedly in the celebration.” A city-wide “victory sing” was held at White Point Garden that afternoon where the “Hallelujah” chorus from Handel’s Messiah was repeated for hours. On November 21, 1919, following President Wilson’s proclamation to make the last Thursday in November a Thanksgiving Day, Governor Manning issued his own public statement that “This year above all others our thanksgiving should assume the spirit of fervent gratitude and devout reverences…Out of the storm of battle, out of the suffering of the world, a sudden victorious peace has been achieved. And a world war…has been gloriously ended.

Slowly, Carolina troops began arriving home. The 30th “Old Hickory” Division, for example, arrived back at the Charleston Navy yard just before the end of December “to put foot upon American soil again at the home of many of its members, and from which some who sleep ‘over there’ went forth to their glory.” Their return, said the newspaper, was “one of the happiest New Years South Carolina has even known.” 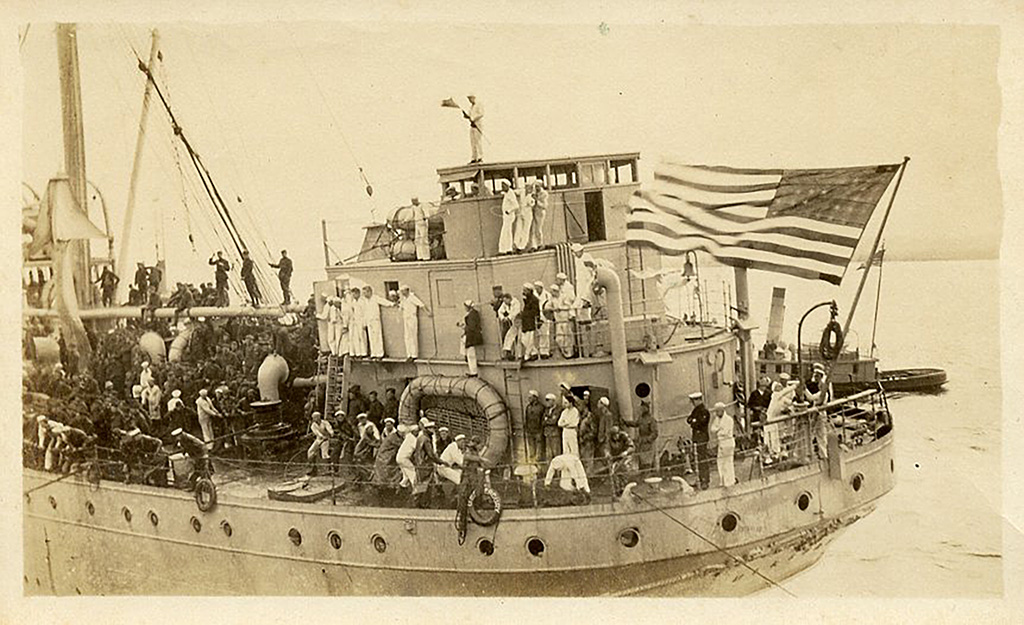 Sepia photograph of the 30th Infantry Division (Old Hickory) on the stern of the USS Mercury as it is docking at the Charleston Port Terminal, March 1919.

Though the war is now one century over, South Carolina’s role in it is still recognizable. It was Cavalrymen who gave North Charleston’s Remount Road its name as it was the designated place where mounted troops were ordered to “re-mount” their horses during training exercises. Fort Jackson, though closed briefly between World War I and II, continues its rigorous basic training duties today, priming almost 50,000 of the U.S. Army’s newly enlisted men and women every year. Finally, eight South Carolinians–the most from any state–received the Medal of Honor for their service in the trenches and elsewhere.

The Charleston Museum, in commemoration of the centennial of Armistice Day and the end of “war to end all wars,” will present a small, temporary exhibition during the Month of November.  Highlighting important artifacts relating to World War I, it will include various military and homefront materials from its permanent collection.