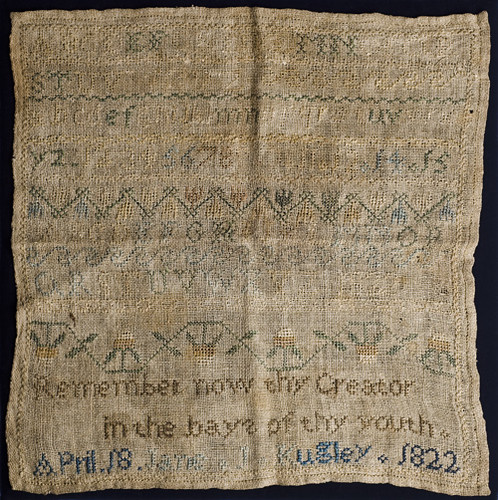 It is always exciting to add a new artifact to the collections of the Museum. It is even more thrilling when that item dates to 1822 and was made right here in Charleston! The Museum already has the largest collection of Charleston-made schoolgirl needlework samplers in the world, and we have just received another. It was made by Jane Johnson Kugley who was born in Charleston in 1814, the daughter of John & Martha Kugley. That means she stitched this sampler when she was only 7½ years old. It has six lines of alphabet letters and numerals along with decorative borders and the verse: “Remember now thy Creator in the days of thy youth.” The little zig-zag “strawberry” border is quite similar to motifs seen in several other Charleston samplers. It is interesting to note, too, that Jane omitted the number “13” from her numerals, even though she went up to 15. And Jane, like so many other children, reversed her d to a b in the word “days.” 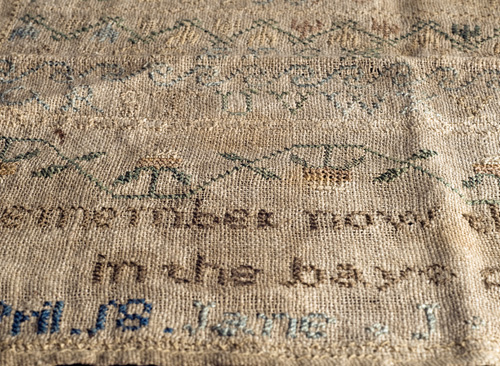 Jane later married Paul Archibald Fripp from St. Helena Island (near Beaufort) on 6/19/1834 and they had two sons, William James Edwards Fripp and Edgar Thomas Riley Fripp, born in 1835 and 1837. Jane died on Sept. 27, 1838 and her husband died less than a year later on April 27, 1839, leaving their sons to be raised by Jane’s mother in Charleston. They both became Methodist ministers, married and had children. Paul Archibald Fripp appears to be a descendant of John Fripp, an English privateer for whom Fripp Island, SC is named. 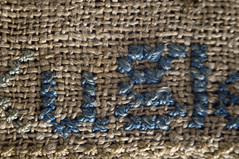 While the vast majority of the Museum’s collections have been acquired through donation, this sampler came to us through purchase at auction in September. We were quite excited that our rather conservative telephone bid turned out to be the winner and then greatly pleased that Doris Ann Brumgardt of Charleston, donated the purchase price. The little sampler is faded and a fairly simple design, but it is a wonderfully personal record of our past. To think that 188 years ago, young Jane took up her needle and thread and summoned all the skill she had to accomplish her sewing lesson. We can almost picture her concentrating on each letter, anxious to please her teacher and her parents, doing something that almost every little girl of her time did.