News and EventsGeneral NewsKiller Fashion: Killing for Fur and the Consequence of Fur Felting

Killer Fashion: Killing for Fur and the Consequence of Fur Felting 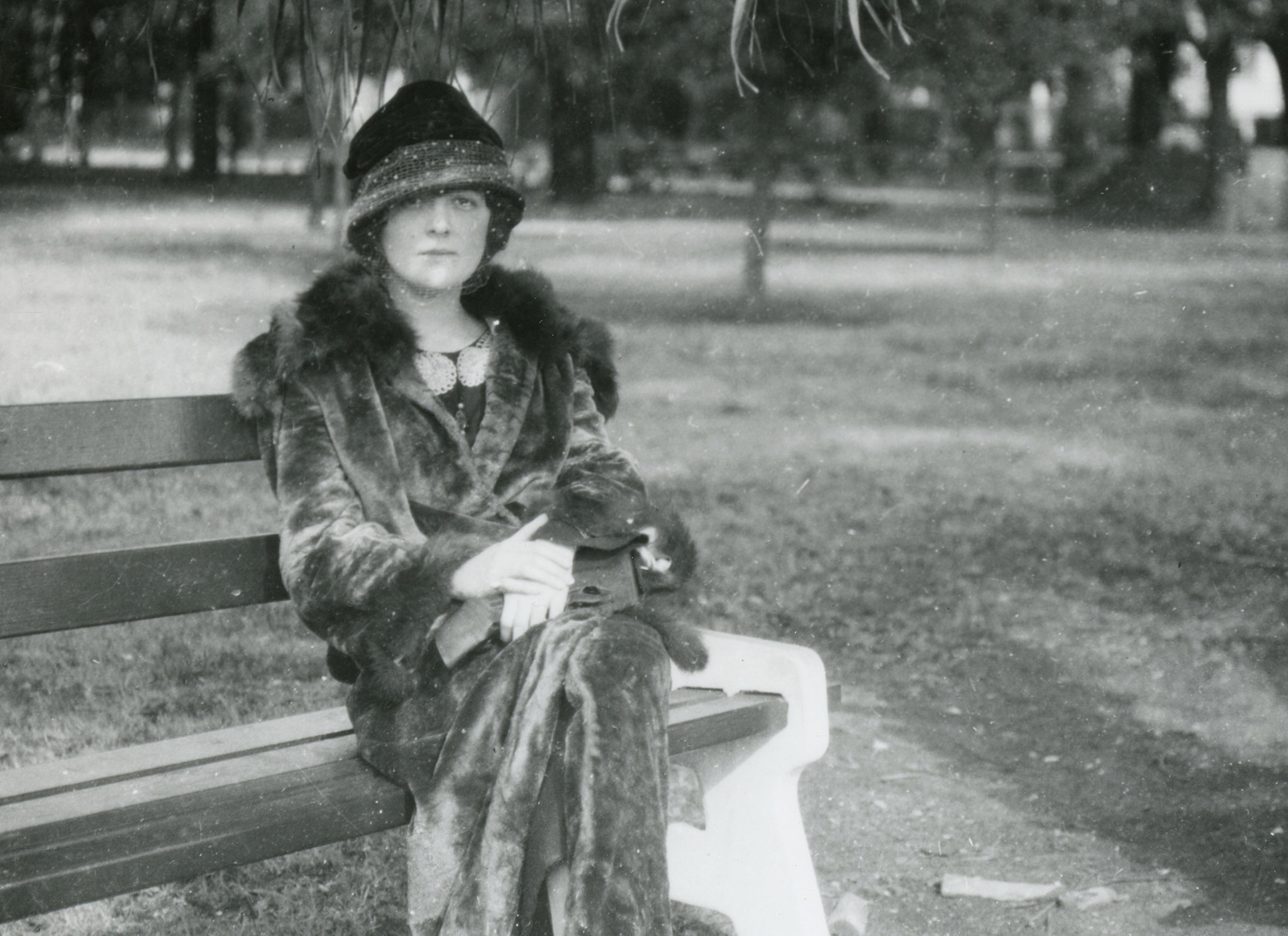 Photograph of a woman in a fur coat, taken by M.B. Paine, Charleston photographer, 1930s.

The Charleston Museum’s current Textiles exhibit, Killer Fashion: The Consequence of Style, looks at the often tragic side of fashionable dress as it relates to the natural environment and those who wore these garments. This exhibit will be on display until March 5, 2017. From now until then, we will be posting about different aspects of the exhibit. Enjoy the first of this series below and come by and see Killer Fashion for yourself! 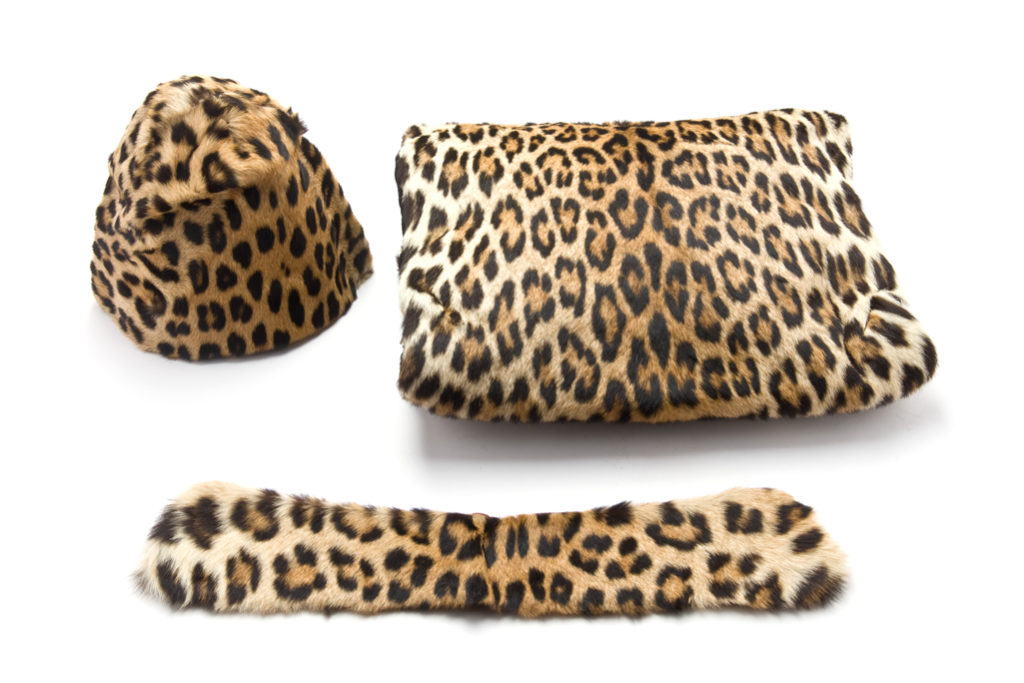 For thousands of years, hunters have used the hides of animals for warmth. Many furs and skins were reserved for the ruling and elite classes with leopard and lion skins worn only by kings and high priests. The royalty in Western Europe favored furs such as ermine, mink, and sable and some regions even instituted sumptuary laws to restrict certain furs for specific classes.  In early North and South American societies, hunters also believed that the strength, power, skills and fertility of an animal could be transferred to a human. 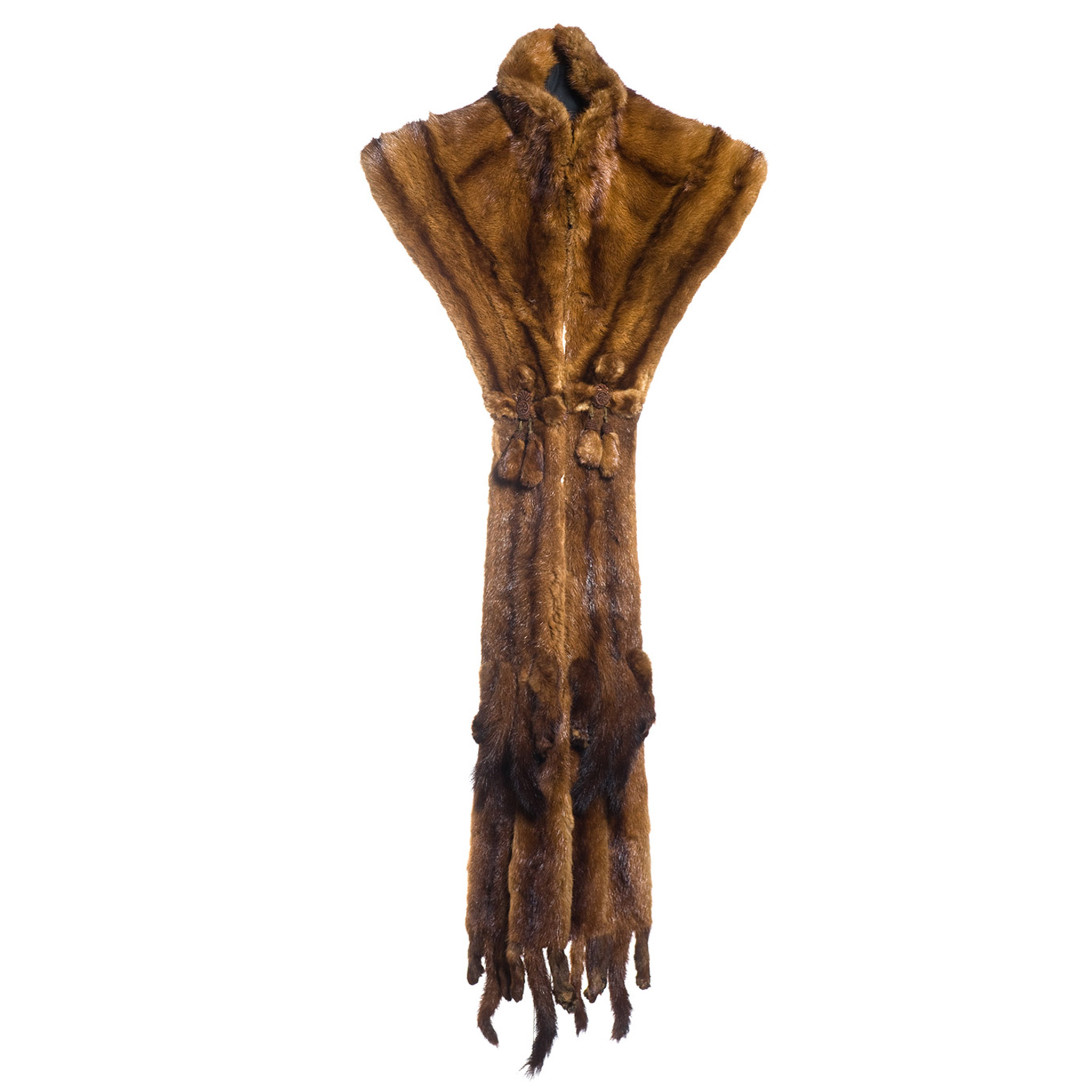 With the colonization of the Americas, furriers, hatters and leather manufacturers enjoyed an almost unlimited supply of pelts.  Though the more expensive furs were still restricted to the upper classes, advancements in farming and processing soon made furs more accessible to everyone. 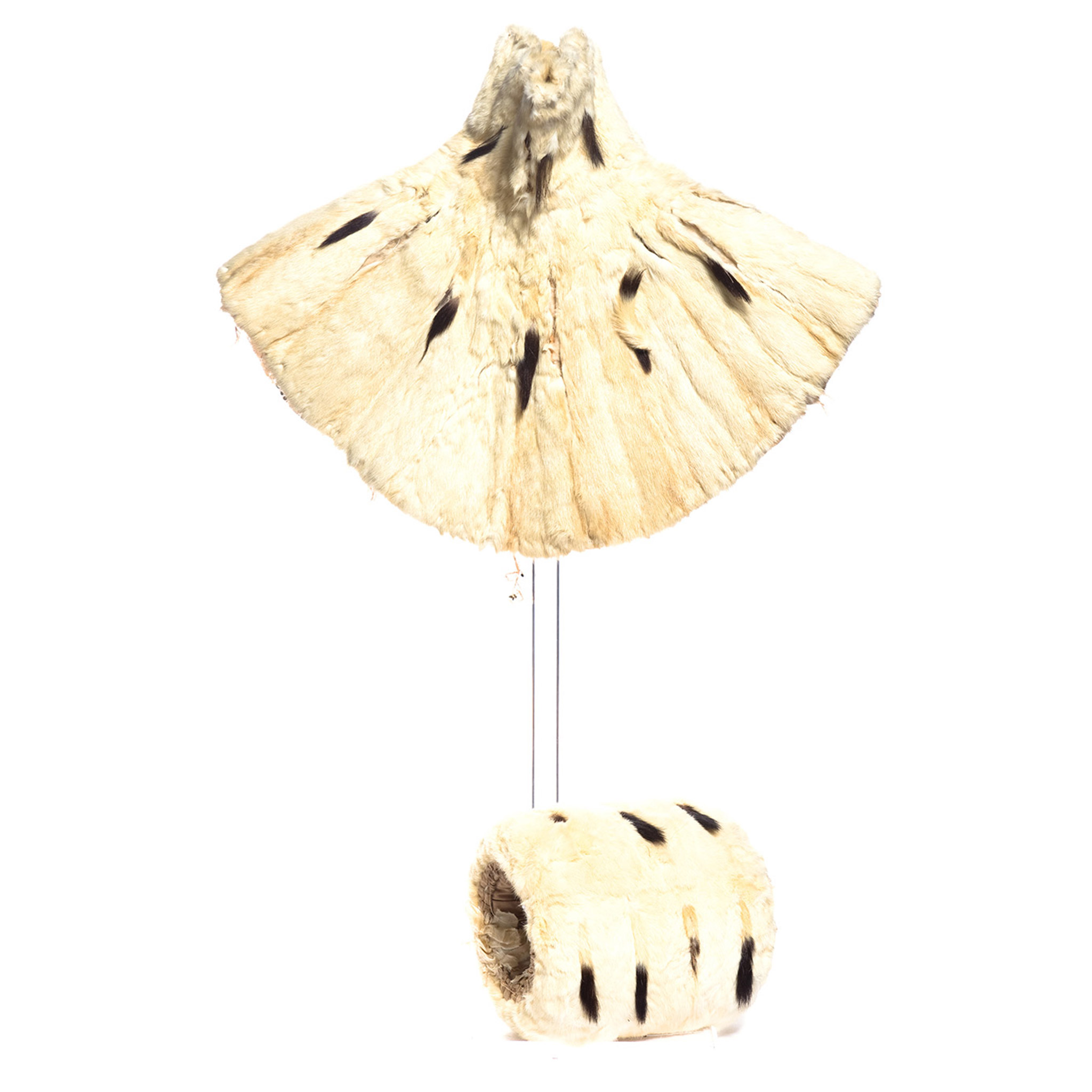 By the 20th century, furs were so popular in general fashion that they were offered in the Sears Catalog, and most every woman probably owned at least one fur piece, often with tails and paws as ornamentation. 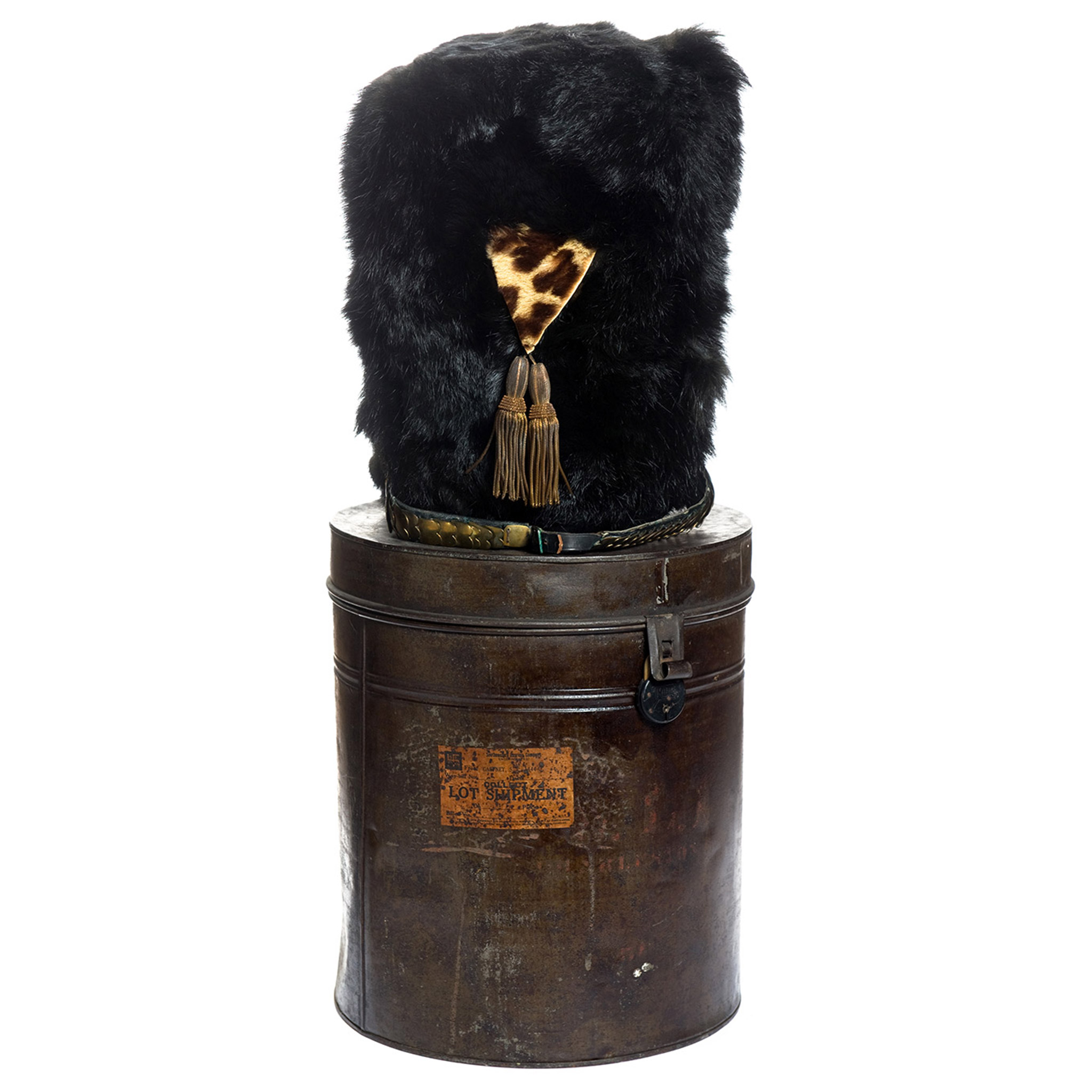 Black Fur Sako with leopard and leather, c. 1878, shown with its original tin box. It was part of the Washington Light Infantry uniform worn by Captain J.T. Flint.

The Consequence of Fur Felting: 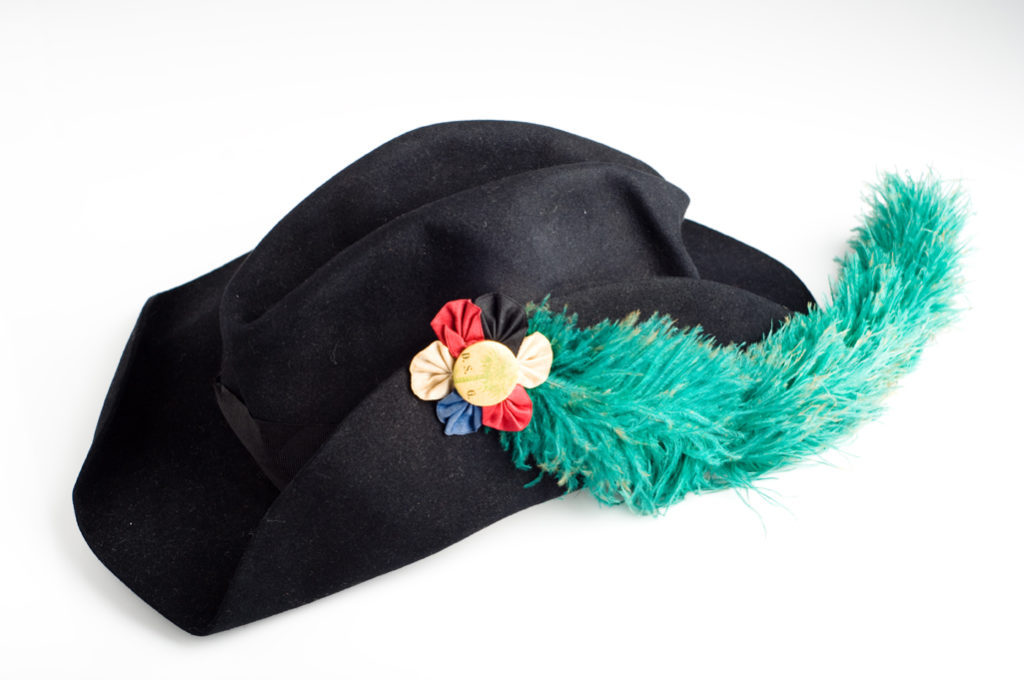 Beaver is perfect for felting purposes; the barbed structure of its under-fur allows beaver felt to maintain its shape even under rough handling and successive wettings.  In the 18th and 19th centuries, the process for making a beaver hat was time-consuming and highly specialized. A single hat needed anywhere from one to five pelts for its production. During the process, makers spread the the beaver hide with a chemical solution of toxic mercury nitrate, which increased the felt’s matting. Constant exposure to the highly noxious mercury fumes attacked the hatter’s nervous system causing neurological health problems. Symptoms included, sweating, difficulties in speech and thought, loss of hearing, loss of teeth, hair, and nails, lack of coordination, poor memory, insomnia, nervousness, and muscle twitching, hence the term mad as a hatter.

Over-trapping, forest fires, and epidemics pushed beaver to the brink of extinction. Mercifully, the introduction of silk hats in the early 19th century remarkably diminished the once lucrative beaver trade.