News and EventsGeneral News2021: A Year in Review 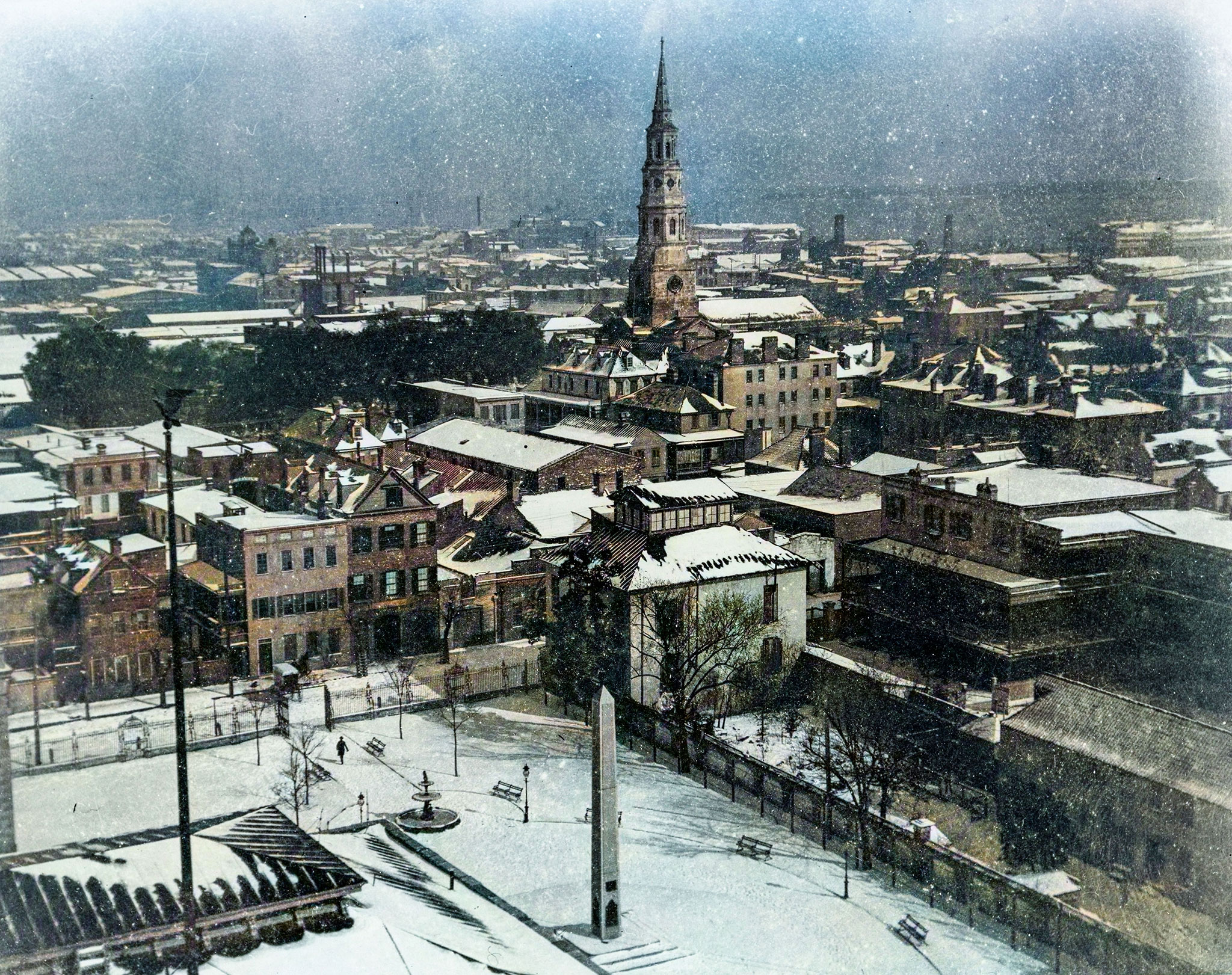 Season’s greetings to all our Museum friends! On behalf of The Charleston Museum Board of Trustees and staff, I wish you a joyous and healthy holiday season and a bright 2022.

This year has been a year of transition for the Museum as we have dealt with the waxing and waning of the COVID-19 pandemic, which has been evident in our visitation patterns. In the first quarter of 2021, prior to the widespread distribution of vaccines, Museum visitation was down from an average year, such as 2019, by 36%. With people becoming more comfortable with travel and getting out, which coincided with increased vaccinations and declining COVID rates, Museum visitation was down only 5% from 2019 in the second quarter.  Visitation recovered nicely in the early summer as June and July attendance were the highest experienced at the Museum in twenty years. Unfortunately, the emergence of the Delta variant brought the numbers back down again, and visitation declined 10% against August 2019. September rose 28%, due in part to the lack of major tropical storms or hurricanes this year, but then declined again in October. So, it has certainly been an up and down year with regard to our visitation, and while we hope for consistently strong visitation revenues in 2022, our operational and budget planning is ready to react to uneven attendance if necessary.

Despite the lingering effects of the pandemic, we have continued to accomplish our educational mission. School field trips to the Museum have been limited this year, but this fall our education department worked with Charleston County School District and Engaging Creative Minds to present Museum afterschool programs at three Title I schools, Lambs and W.B. Goodwin Elementary Schools in North Charleston and Sanders-Clyde Elementary in downtown Charleston. Chief of Education Stephanie Thomas and new Museum Educator Elise Reagan have excelled at arranging and presenting these programs. Chief of Museum Operations Susan McKellar, meanwhile, has created a variety of new adult programs, which have been popular. These include a holiday candle making workshop and sewLAB events with local designer JennyTHREADS. We have also added to the number of sweetgrass basket weaving programs offered during the year due to their popularity. See our December/January calendar card or our website for these new offerings. 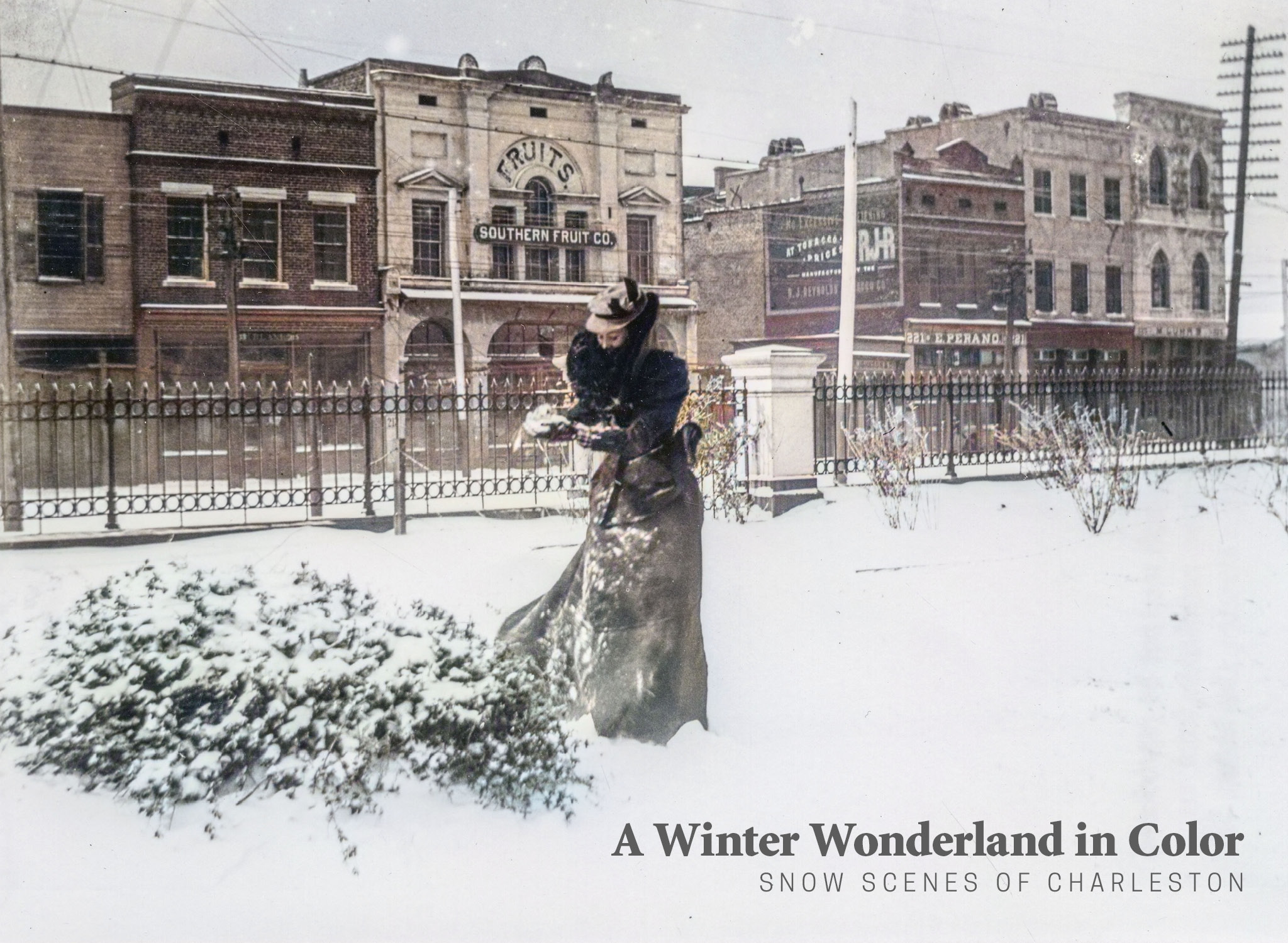 Our exhibits team, led by Jennifer McCormick, Chief of Collections, fielded four special exhibitions this year. There is still plenty of time to view Fur & Frost: Carolina Winters and A Winter Wonderland in Color: Snow Scenes of Charleston if you have not seen them already. Bring your out of town guests this holiday season! 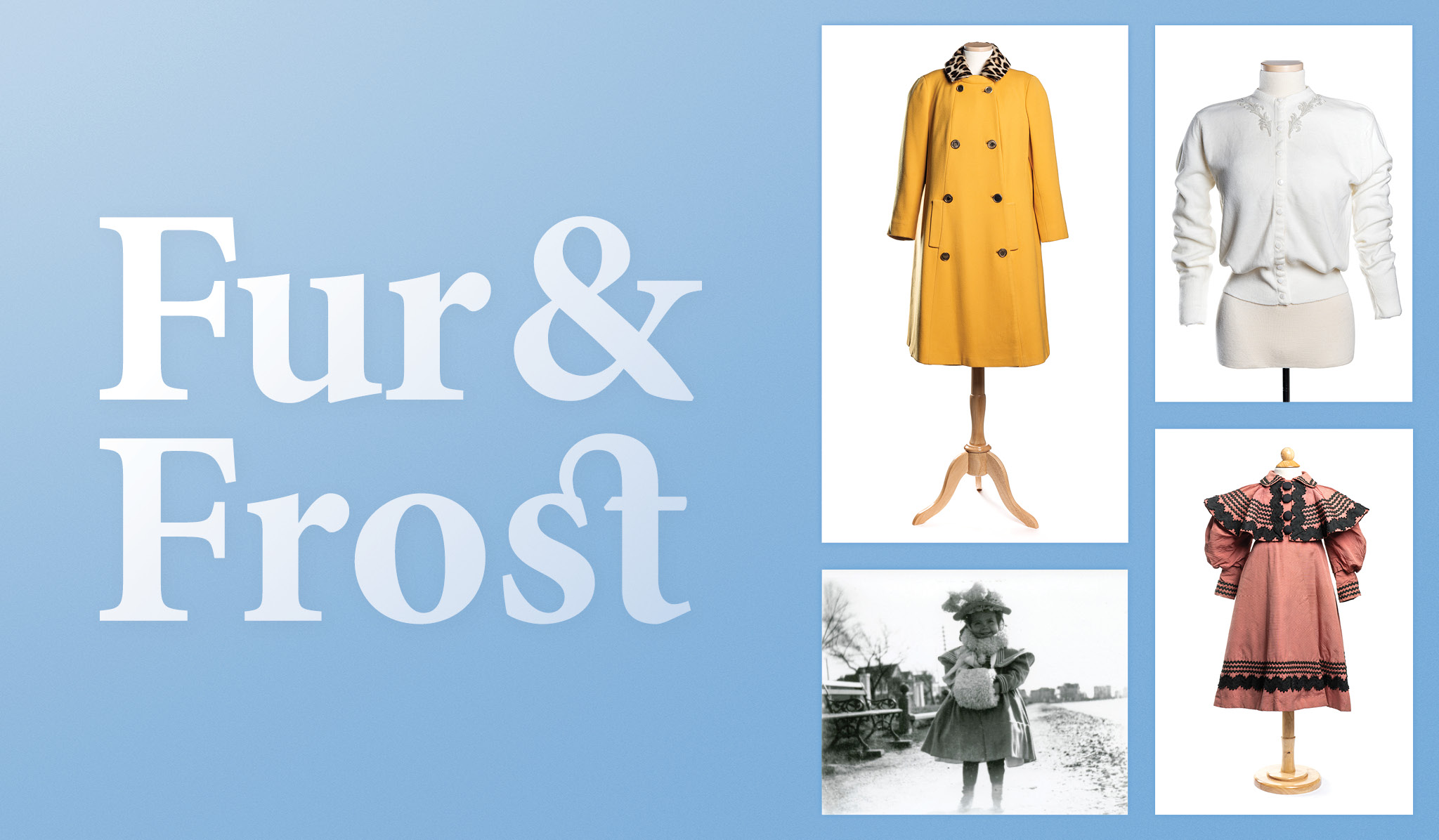 Designed and assembled by Virginia Theerman, Curator of Historic Textiles, Fur & Frost features an engaging assortment of winter garments from the early nineteenth century to the twentieth century. Virginia has also converted the study drawers in the Historic Textiles Gallery to an “open storage” area where a selection of textiles not ordinarily shown are on display. Thanks to funding provided by the Society of Colonial Wars, the Museum was able to install a cypress dugout canoe in the Courtyard entrance, which adds to exhibits in that space. We are grateful to this fine organization for its assistance. 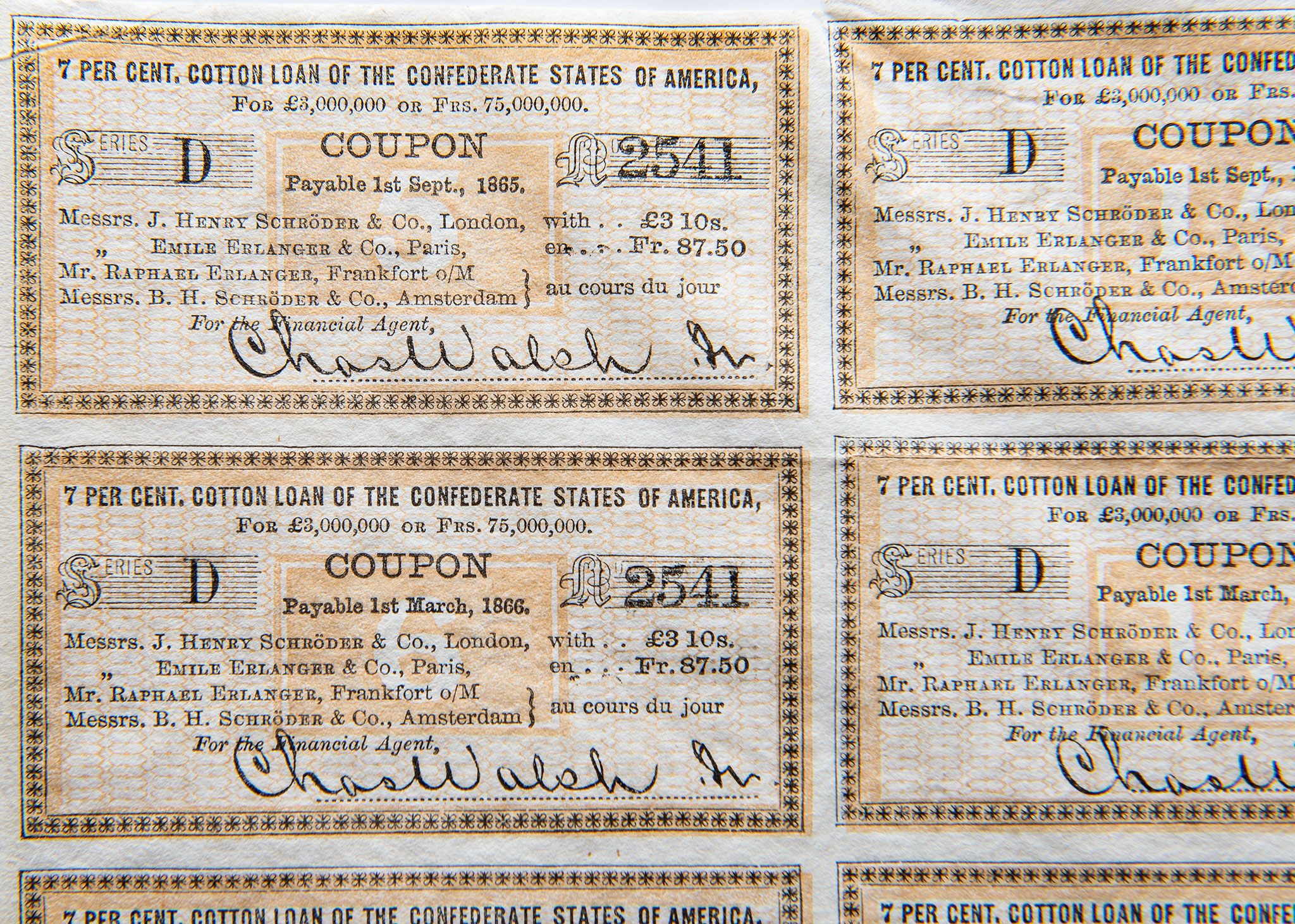 Jennifer and the curators have also been busy on the collections front, and the Museum accessioned over 250 new objects into the collections this year. One of the more interesting pieces acquired is a cotton bond, issued by the Confederacy during the Civil War to fund the war effort. Historically, bonds literally had coupons to clip off that were then redeemed for interest payments. The coupons on this bond were redeemable in cotton. The last coupon clipped from it was from March 1865, and the next unclipped coupon is for a September 1865. With the collapse of the Confederacy between those two dates, that coupon and those remaining were never redeemed. Two other fascinating pieces that came in this year are a waistcoat (vest) that belonged to Revolutionary War patriot Thomas Sumter and a bodice of his wife, Mary Jameson Sumter. These were given by the National Society of the Colonial Dames. 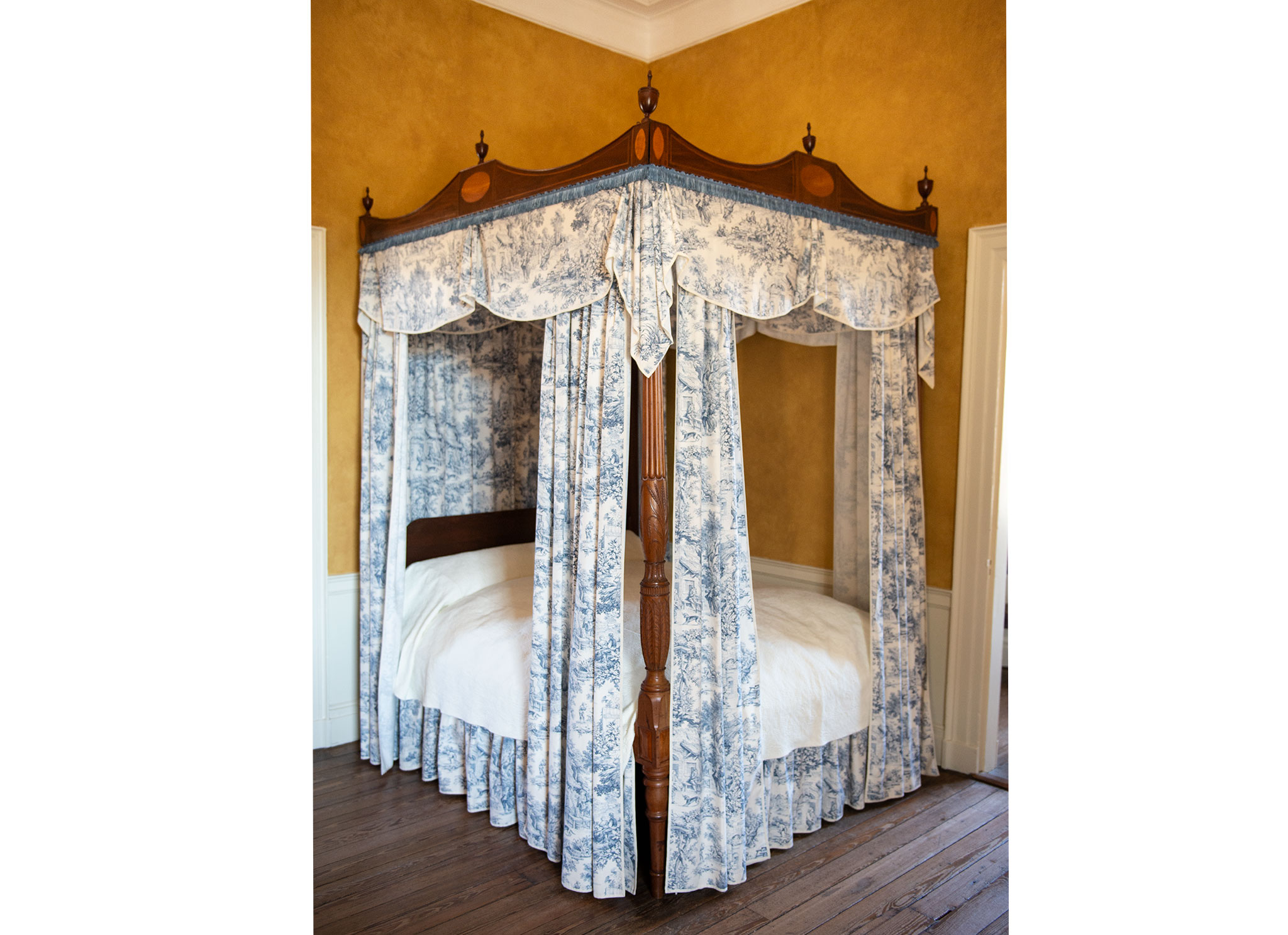 In other collections news, we are thankful to the E. Milby Burton Trust for Historic Houses for providing funding to have the rice bed at the Joseph Manigault House reupholstered, which greatly enhances interpretation in the master bedroom. The project included two sets of bed hangings, a gauze covering to emulate lighter summer dressings and a heavier toile fabric for keeping out the winter chill. The Trust has supported many worthy projects at the historic houses over the years. The Museum also loaned a pew once used in the Edisto Island Presbyterian Church by enslaved people, to the Smithsonian’s Museum of African American History and Culture. This pew was made by enslaved people around 1831, and was used by them and free men and women after the Civil War. We are excited to have this amazing artifact visible for a national audience in our nation’s capital.

At its September meeting, the Board of Trustees approved a new Strategic Plan for the Dill Sanctuary. The plan reaffirms the Museum’s commitment to the protection of this important property, the largest privately protected tract of land on James Island, and provides focus and direction for appropriate stewardship of this community asset as we move into the future.

2022 promises to be a particularly active year for the Museum. In addition to regular offerings in the Historic Textiles and Lowcountry Image Galleries, two special exhibits are planned for early in the year. Beginning January 10, the Museum will present Hidden Treasures: A Reassessment of South Carolina Silver, featuring loaned pieces of historic Charleston-made silver in association with a new book on the subject by historian Catherine Hollan. In February, the Museum will launch Birdwatching, an exhibit produced by Garden & Gun magazine, encompassing a unique combination of selections from the Museum’s collection of bird mounts, skins and eggs in artistic vignettes at the Joseph Manigault House. Matt Gibson, Curator of Natural History, has been working closely with independent art curator Kelly Turner on this distinctive display of these specimens. The exhibit will be offered in conjunction with the Southeastern Wildlife Exposition. 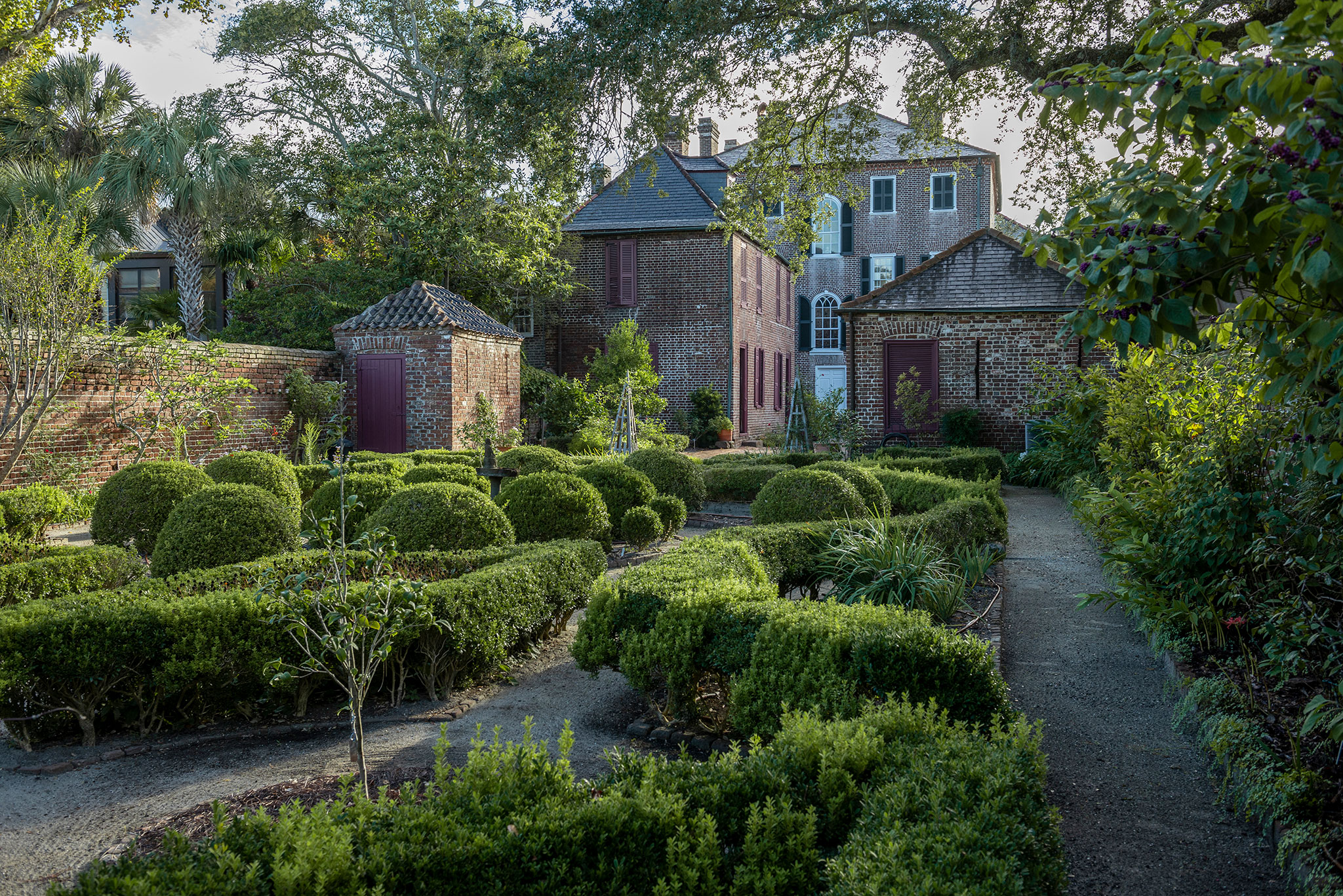 2022 is the 250th anniversary of the construction of the Heyward-Washington House in 1772, and Stephanie Thomas and Heather Rivet, Historic Houses Manager, are planning a series of monthly events to mark this occasion.

We are also anticipating the release of our special volume commemorating the 250th anniversary of The Charleston Museum, to be published by the University of South Carolina Press and released in late 2022. This will be an extraordinary lead-in to 2023, a milestone anniversary year for the Museum.

With so much happening now and planned for 2022, we look forward to seeing you at the Museum soon. Finally, I send an immense thanks to the Museum’s volunteers, members and donors. The twenty months since the start of the pandemic have been trying for everyone nationally and locally and have been particularly challenging for non-profits such as the Museum. We could not have navigated our way through these difficult times without your support. We are most appreciative. Thank you and Happy Holidays to all of you!