The Timelessness of Joshua Lockwood

Tallcase clocks imported and labeled by Charleston clockmaker Joshua Lockwood, second half of the 18th century

Joshua Lockwood was the son of Joshua Lockwood, Sr. (born in Worcester, England c. 1699), and Sarah Lee (born in Bridgetown Barbados c. 1722), the daughter of Worcester-born parents. Accounts of Joshua Lockwood’s place of birth vary. Most secondary sources place his birth as having occurred in Worcester, England on 5 November 1729, but Lockwood family tradition says he was born and spent his early years in Dorchester (now the site of Colonial Dorchester State Historic Site) in South Carolina, his parents having immigrated to the colony in 1723. Both parents had roots in Worcestershire, England, but like many early Carolinians his mother’s family, the Lees, had come to the Lowcountry by way of Barbados. It is likely that the two met in Carolina and that Joshua was born there and not in England.

Joshua’s father, Joshua Sr. was granted two tracts of land near present day Orangeburg, South Carolina in 1736 at which time the family made the move further inland into what was then the expanding Carolina backcountry. There the elder Lockwood set up in business as a merchant. At the age of 14 Joshua was sent to England to study for the clock and watch trade, and was apprenticed to London clockmaker James Payne for seven years. While Joshua was in England, his father died, and it is believed that he remained in Britain beyond his apprenticeship in order to establish himself financially before returning to South Carolina. He appears to have spent at least a portion of this time in the city of his family’s origins as evidenced by his 1754 “Free-Man’s Oath” issued in the City of Worcester, England and now in the collection of The Charleston Museum. 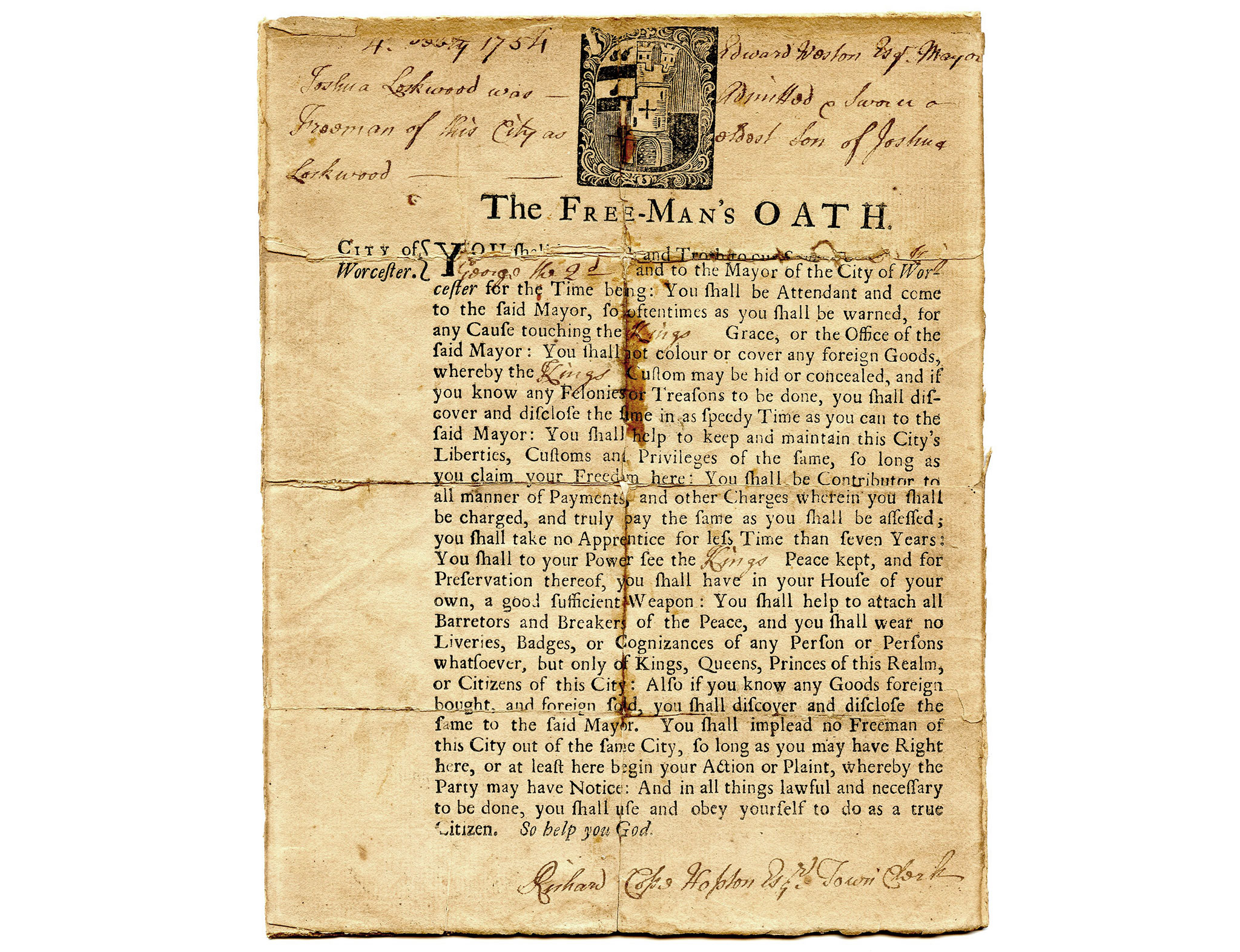 “The Free-Man’s Oath” issued by Joshua Lockwood to the City of Worcester, England, in 1754

Lockwood family tradition states that after Joshua Sr.’s death Sarah Lee Lockwood left South Carolina with her younger children and moved to Worcestershire, England, to be near family. This may account for Joshua’s presence there in 1754 and perhaps at least some of the posthumous confusion surrounding his own place of birth.

Lockwood returned to South Carolina in January 1757 where he began advertising his skills in the clock and watch business. Freshly delivered from the ship that had brought him to Charles Town, he immediately turned to the South Carolina Gazette where he posted:

Arrived with Capt. Curling, Joshua Lockwood, watch maker; who begs leave to acquaint the ladies and gentlemen of this province, that he intends to follow the art or calling of watch and clock making, mending, and repairing, at Mr. Lee’s carpenter in Elliott Street, and ladies or gentlemen will be waited upon in the country by 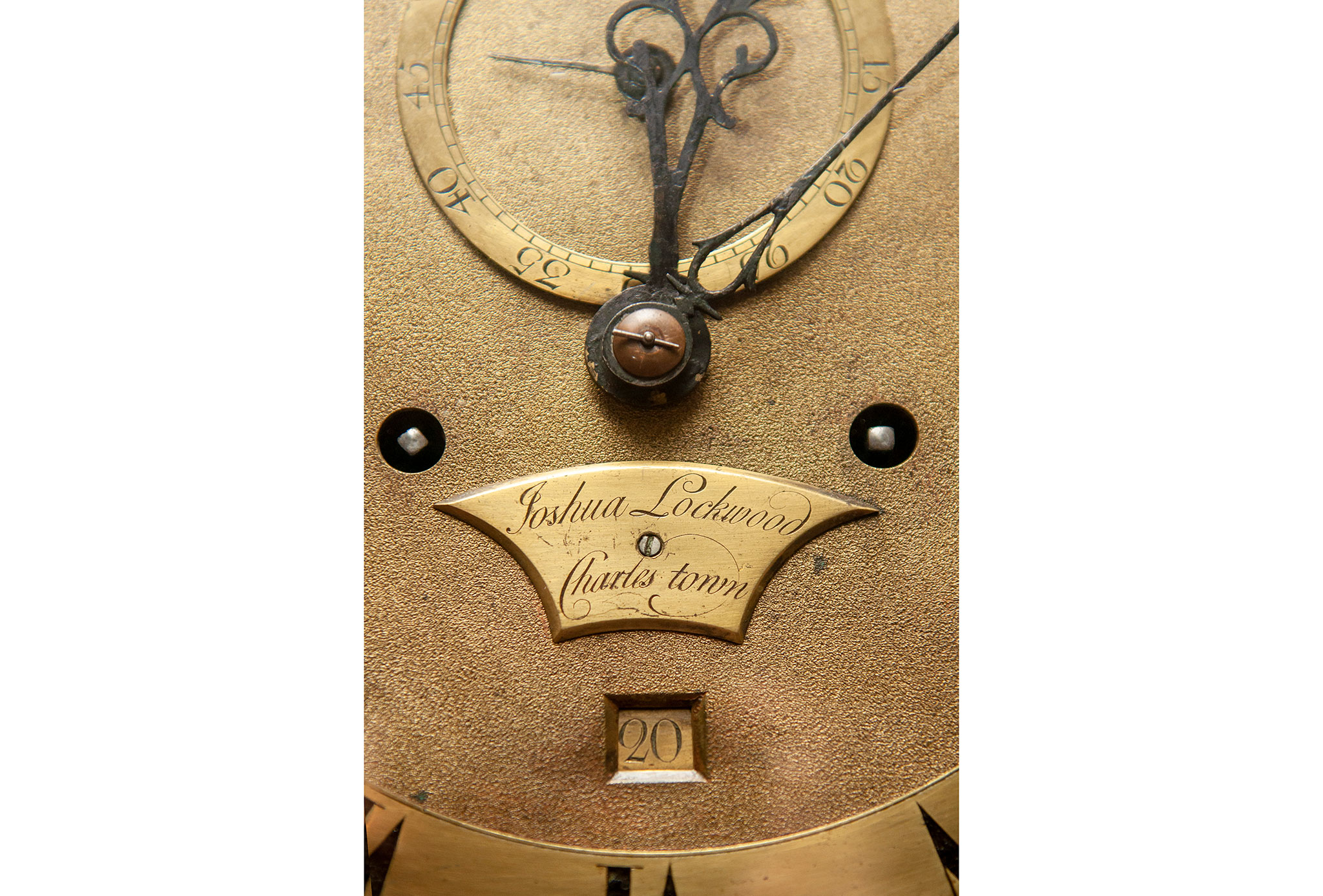 By June, within five months of his landing in America, Lockwood had married his cousin Mary Lee. Together they had eleven children, eight of whom survived into adulthood.

Lockwood was able to support his prolific family by working as a “clockmaker” and merchant, offering a variety of mostly high-end British manufactured goods, particularly timepieces, to South Carolina’s affluent planter elite. To be a “clockmaker,” as Lockwood advertised himself, in the 18th century, one didn’t necessarily have to manufacture clocks; many—including Lockwood—appear to have retailed, maintained, and repaired timepieces originally made by other hands. 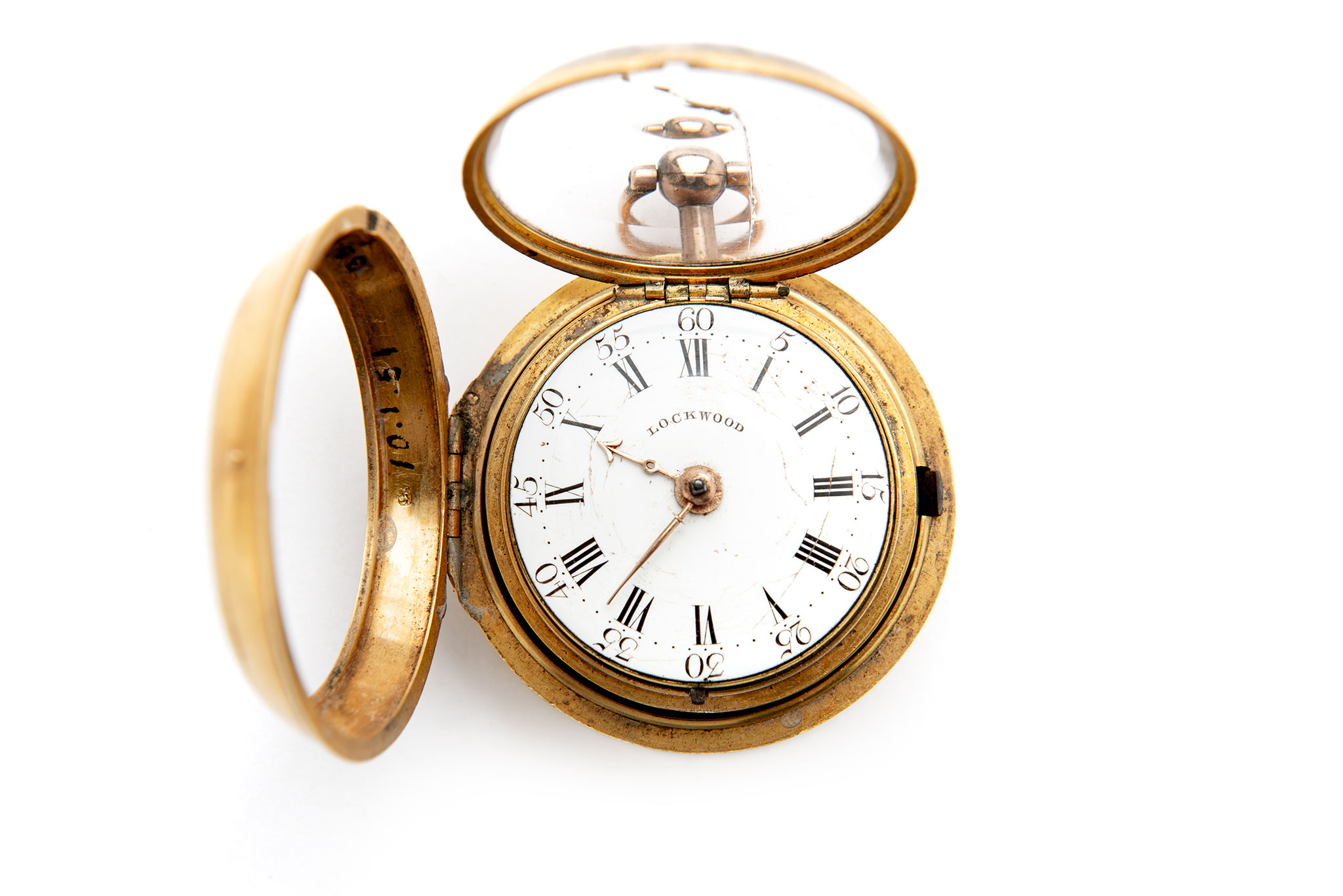 Pocket watch imported and labeled by Chaleston clock and watchmaker Joshua Lockwood, second half of the 18th century

Approximately one dozen or so Lockwood-labeled timepieces are known to survive. These include tallcase clocks, bracket clocks, and pocket watches. The Charleston Museum is fortunate to have three of those pieces in its collections: two tallcase clocks and one pocket watch (along with a second un-labeled pocket watch with a Lockwood family provenance).