We asked Martha Zierden, the Charleston Museum’s Curator of Historical Archaeology, to fill us in on the latest news coming from the The Walled City excavation efforts. Here’s what we found out:

We have good locations on three fortifications, the Half Moon, Granville, and the redan at Tradd St. But we’ve got no good location on the curtain line that ran along East Bay and connected the forts.

The curtain wall was the wall that connected all the bastions, redans, drawbridge, and other projections of the walled city. This section of the curtain wall was made of brick in the 1690s and fronted the harbor. It doubled as the wharf wall, or sea wall, with water lapping up to its base when constructed.

Because Anson Construction has been working on a project for Charleston Water Systems at the intersection of Tradd and East Bay for a few months, the Task Force requested an opportunity to look for the curtain line in their open excavations. Instead, Charleston Water offered the services of Anson Construction for ‘a day’ to look in the street and sidewalk for the curtain line. We worked from the parallel parking space through the green shoulder into the sidewalk. There were numerous other features, including iron pipes and a later wall. But we eventually discovered the characteristic soft red brick and white mortar of the early wall, wedged between these later features. We were able to take photographs and, perhaps more importantly, take GPS readings of exact location. This will help our long-term effort of mapping the fortifications. Because the wall seems to be well-preserved below the current ground surface, we were able to locate the top of the feature with minimal digging. 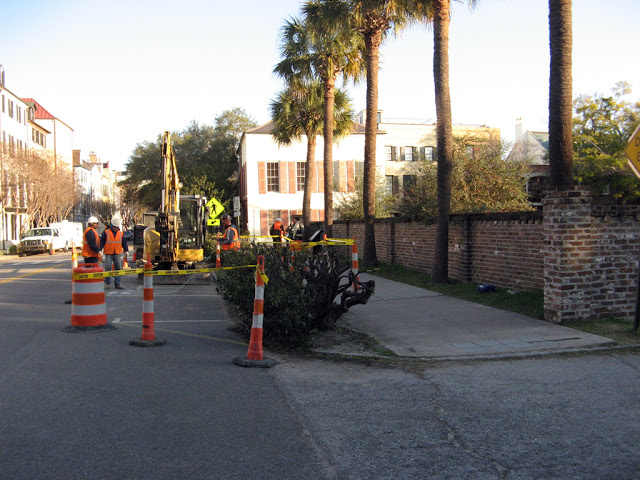 We are really grateful to Charleston Water Systems and Anson Construction for this opportunity. I was joined by Eric Poplin of Brockington and Katherine Pemberton of Historic Charleston Foundation, both long-time research partners with the Walled City Task Force.

We are really grateful to Charleston Water Systems and Anson Construction for this opportunity.

Learn more about the The Walled City