News and EventsGeneral NewsThankful for our Bounty

Thankful for our Bounty

The Charleston Museum boasts a wonderful quilt collection, most of them locally made, dating from the late 18th century through the 20th century. Particularly important are our 19th century chintz appliqué beauties that were obviously a favorite of the Lowcountry women that made them. Perhaps especially relevant to our celebration of Thanksgiving is a chintz print featuring a bountiful basket of luscious fruit found in four of the museum’s quilts. Made by different women and given to the museum from different families, these four dramatic quilts with identical center medallions attest to the tremendous popularity of this motif. Many of the quilts in other museums with this same center are even attributed to South Carolina.

So, as a Thanksgiving offering, let us feast our eyes on our four Basket of Fruit quilts, each a testament to the artistry and skill of their makers.

This chintz fruit basket medallion itself was from an English block-printed cotton, dating perhaps to 1815. The fabric as purchased included at least the lovely basket of fruit, the interlocking circular border and four triangular motifs with pineapple, grapes and peaches. 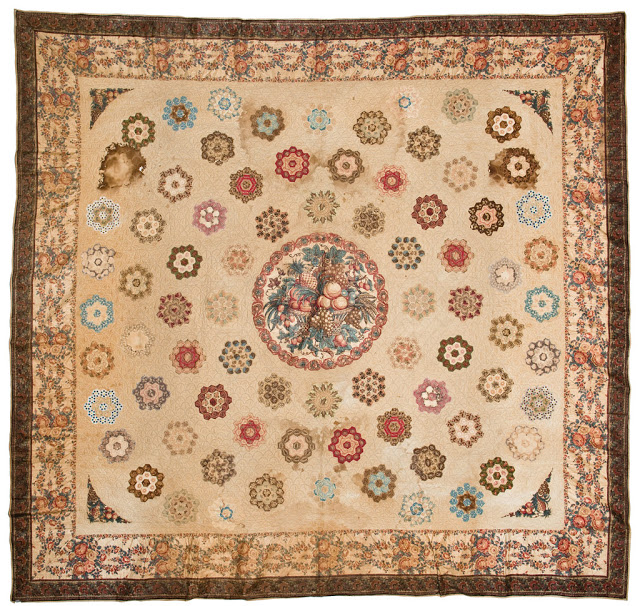 First up is a Basket of Fruit quilt made by Catherine Osborn Barnwell, probably around 1829. Her center medallion is the entire basket with its interlocking border. She placed the four fruit triangles in the corners of this interesting quilt. Surrounding the chintz basket are paper-template pieced rosettes and a floral chintz border. The corded quilting was said to have been worked by a servant/slave. Catherine (1809-1886) was the daughter of Elizabeth Osborn and Captain Edward Barnwell of Beaufort. According to family records, the quilt was completed before she married her cousin, Reverend William Hazzard Wigg Barnwell in 1829. He was the pastor at St. Peter’s Episcopal Church in Charleston for twenty years. They had twelve children; the quilt descended to her son Allard’s daughter, Nina Graham Barnwell Heyward, who gave it to the museum in 1942. 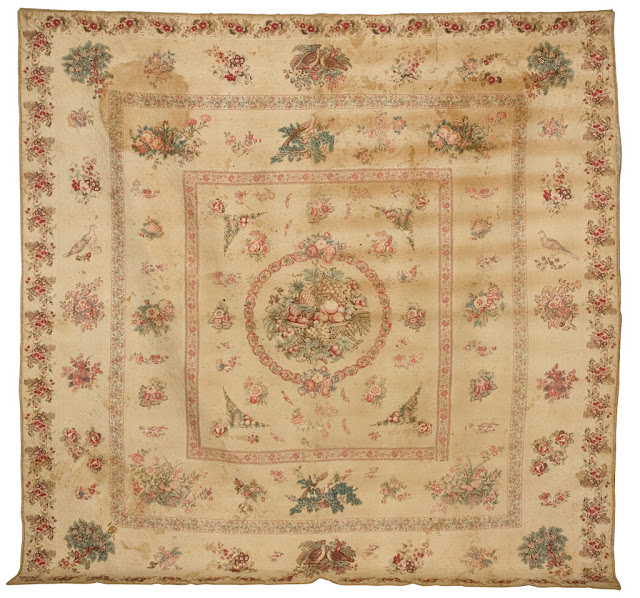 In our second lovely chintz appliqué quilt, the interlocking border around the fruit was expanded by adding a floral bouquet at top and bottom. The four fruit triangles are in the corners of the first border. The quilt then explodes with additional flowers, birds and borders. This one was probably made by Sarah Eliza Reynolds Croft (c. 1790-1859) around 1825. It was given to the museum in 1928 by Georgie L. Gready, the maker’s granddaughter. 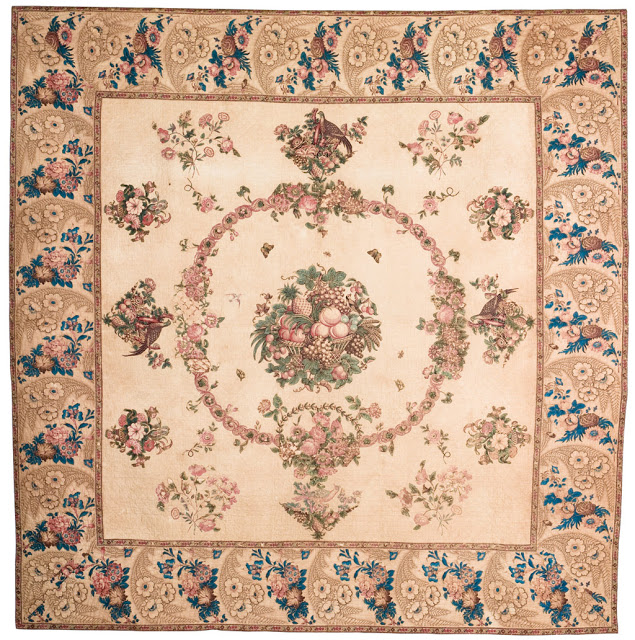 Margaret Eliza Darley Seyle Burges (1804-1877) may have made our third stunning fruit basket quilt, perhaps a little later, c. 1840. She used the same center medallion but expanded the interlocking border even farther by adding four lovely floral motifs. She surrounded this with bouquets and flower baskets as well as birds perched on those four fruit triangles. It was given to the museum in 2010 by Margaret’s great-great granddaughter, Anne Burges Lake. 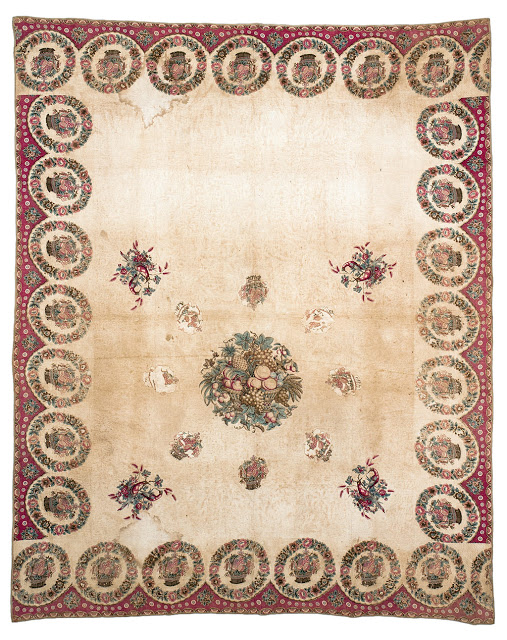 Lastly, is this unusual chintz appliqué quilt with the same fruit basket medallion. This time, however, the medallion is set without the interlocking border or the triangles and placed in the lower half of the quilt. It is surrounded by baskets of flowers, game bird pairs and a delightful fruit basket border. Perhaps the upper portion of the quilt was left plain to be covered by pillows or shams. We do not know who made this quilt, but the donor’s great-great-grandfather was Henry Pinkney Walker (1816-1890), British vice consul in Charleston during the Civil War. Perhaps this quilt was made by his wife, Dorothy “Dora” Modd Box Walker (1817-1900). It was given to the museum in 1998 by Jeanne Walker Myers.

This chintz print design may have been influenced by earlier published botanical drawings such as those of English horticulturist and author, Robert Furber, who is credited with producing the first seed catalog in England. He is most noted for his series of prints published in 1730, Twelve Months of Flowers. This was followed in 1732 by his Twelve Months of Fruit, featuring 364 different fruits. The fruit in this chintz panel bears a striking resemblance to Furber’s October image.