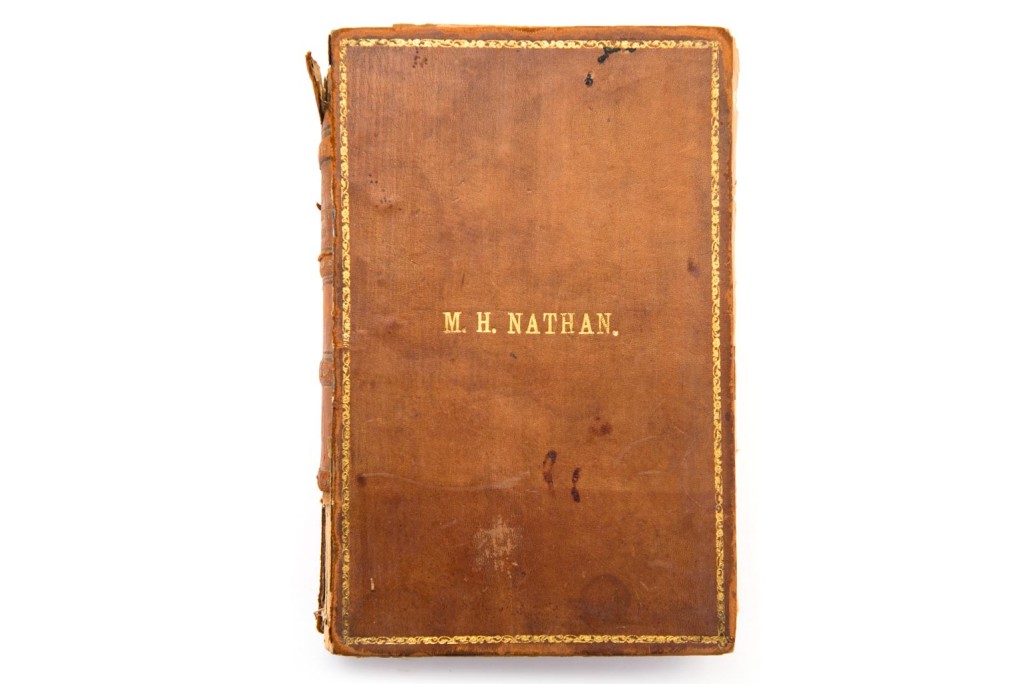 Moses Henry Nathan was born in Charleston to Henry Nathan and Esther Levy on November 7, 1821. A member of the Shearit Israel Synagogue, he became a prominent businessman, owning a coach and carriage business on the corner of Meeting and Wentworth Streets. It seems though, his real aspiration, was to become a fireman. Joining the Charleston Fire Department in 1839, he steadily moved his way through the ranks until he was elected Chief in January of 1859. He would hold this position throughout the Civil War (leaving Charleston briefly for Columbia in 1865) until 1873.

This unassuming book is a collection of the Annual Reports that were written and published as pamphlets by Chief Nathan in which he had bound with interleaving blank, lined sheets of paper for his own writings. On display before you, is a portion of these writings giving a detailed account of the 1861 fire of Charleston that began at 8pm. on December 11 and lasted until the afternoon of December 12. In his account, Chief Nathan estimates the destruction of over 1300 houses and outbuildings at a cost of 5,000,000.00 in damage. He attributes the spread of the fire to the wind, the lack of equipment and the empty tidal drains. Many people would come to think that the fire was Charleston’s penance for firing the first shot of the Civil War. The December 28, 1861 issue of Harper’s Weekly reported a quote from the Herald stating, “Does it not look like a retribution of Providence, and an omen and a type of the future destruction of the rebellion?” In his account, Chief Moses H. Nathan not only details the fire of 1861 from beginning to end, he has memorialized his own view of the intention of Providence, believing it to be a savior of lives rather than a retribution. 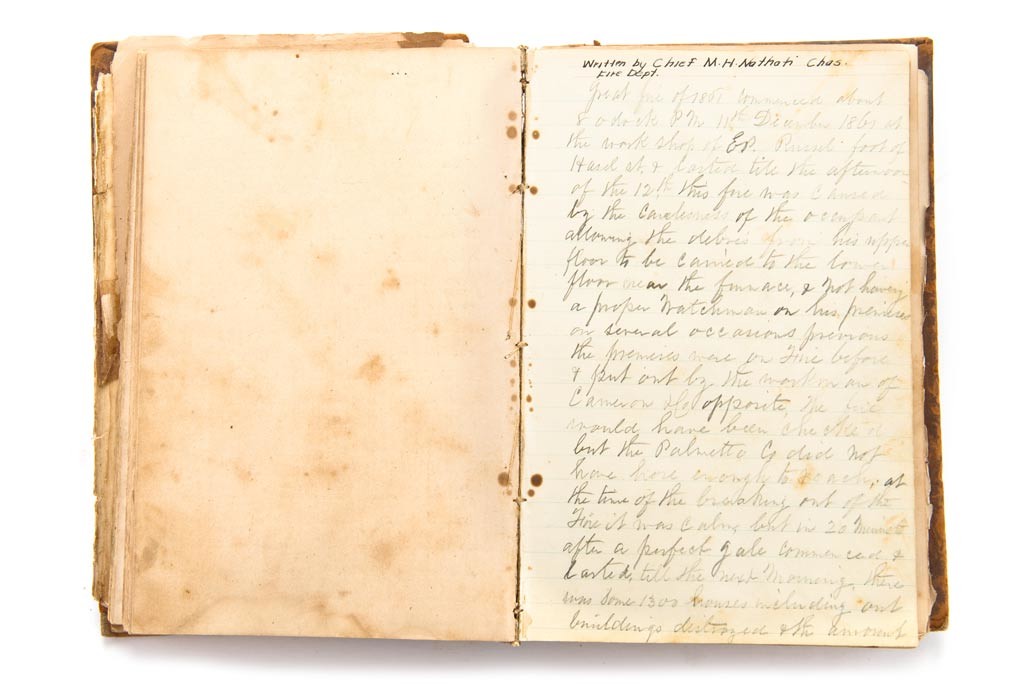 “It would seem that the hand of Providence intended this misfortune, for had not the fire happened many lives would have been lost in the bombardment of the city by the cursed Yankees…”

[The] Great fire of 1861 commenced about 8 o’clock p.m. 11th of December 1861 at the workshop of E.P. Russel [at the foot] of Hasell Street and lasted until the afternoon of the 12th. This fire was caused by the carelessness of the occupant allowing the debris from his upper floor to be carried to the lower floor near the furnace and not having a proper watchman on his premises. On several occasions previous the premises were on fire before and put out by the workmen of Cameron & Co. opposite. The fire would have been checked but the Palmetto Co. did not have hose enough to reach. At the time of the breaking out of the fire it was calm, but in 20 minutes after a perfect gale commenced and lasted until the next morning. There were some 1300 houses including outbuildings destroyed and the amount of loss estimated at $5,000,000. A full account of the loss I had obtained, but all of my manuscripts were destroyed by Col. Williams’ regiment Confederate army who were quartered at my store on the corner of Meeting and Wentworth Streets, a, most wanton destruction.

At this fire General Ripley then in command ordered several houses blown up but no good was affected. The last building burned was the church on Logan Street. At this fire the Pioneer Steamer just finished was on duty and did some good, but so severe was the gale that water was of no use. I attribute the extent of the fire to the neglect of the police then having charge [of the] tidal drains. When they were needed in Meeting Street near Queen, there was no water in the same. The fire could have been checked at that time but for the want of water. It has been stated by some that there were several places set before stated and not by any incendiary. A large and very valuable amount of fine wines, the private stock of many wealthy citizens was also destroyed. It would seem that the hand of Providence intended this misfortune, for had not the fire happened many lives would have been lost in the bombardment of the city by the cursed Yankees, for thousands of their shells fell harmlessly in the burnt district which otherwise would have fell into the houses but for the fire. 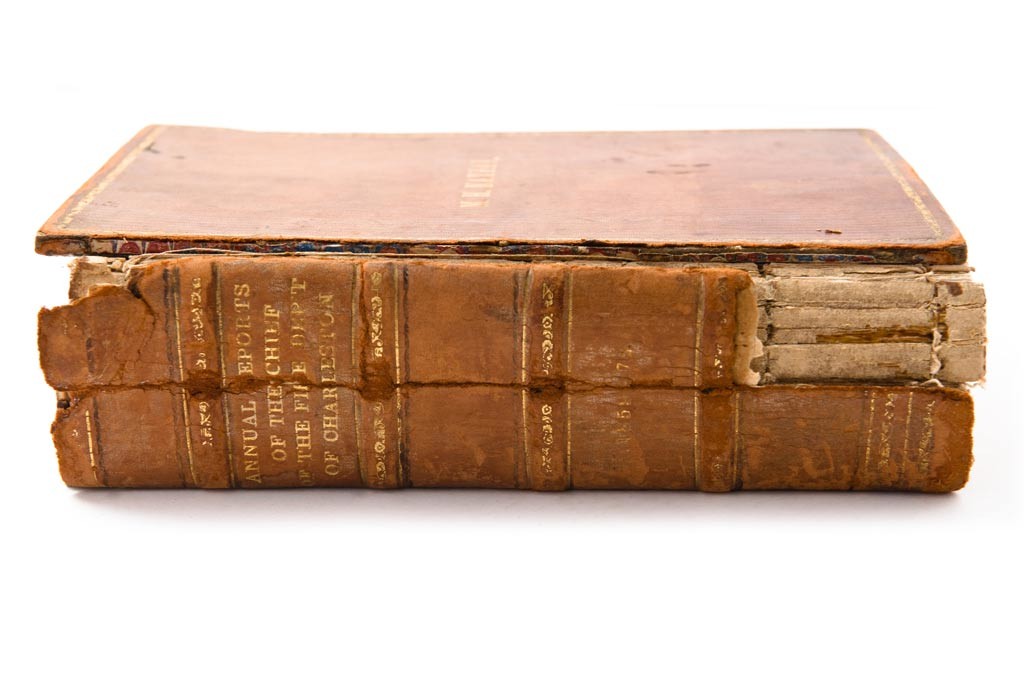