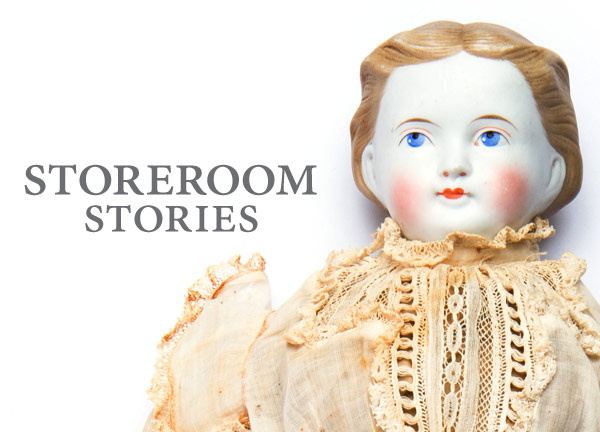 Although only two years old at the time of receiving this doll, Mrs. Constance Bennett (then Miss Constance Courtenay) grew to understand its extraordinary journey from her grandmother’s house in New York to her temporary home in Camden, S.C.

Constance was born in Charleston on August 23, 1863 – right about the same time Union forces on Morris Island began shelling the already battered the city and forcing hundreds, including the Courtenays, from their homes. Seeking safety further inland, the family relocated to Camden later that autumn where they would wait out the rest of the War.

Constance’s grandmother, Mrs. Robert Hicks, meanwhile, had certainly not overlooked the birth of her little granddaughter even in the midst of The War. Determined to send her a gift, she purchased this doll from a New York retailer and set about finding a way to deliver it safely to her. Yet, already well aware of the Federal blockade of Charleston’s harbor, and not trustful of the war-weary post office, Hicks enlisted the help of a family friend who just happened to be a Federal officer heading south. “Together,” as Constance would recall, “he and my grandmother packed the gift into a small enough package to fit into his overcoat pocket.”

Over the next sixteen months, the still-unknown officer still carried Constance’s doll around the Confederacy until finally, as fate would have it, his regiment ended up in occupied Camden in February 1865.

In a 1948 interview, Constance recalled:

A year and a half after we moved, the family was seated at [the] table when there was a knock on the door. My mother opened it and saw a Union officer on the threshold. He asked if she could direct him to Mrs. William Courtenay, and when my mother replied that she was Mrs. Courtenay, he said, ‘My work is done’ and handed her a little box which my grandmother had given him nearly two years before in hopes that he might be able to deliver it.

Naming her (relatively) new doll “Rebecca” after a half-sister, Constance Bennett treasured the doll for the rest of her life. Her son, Thomas Bennett, inherited the doll and in 1954, placed it in the collection of The Charleston Museum.

Founded in 1773, The Charleston Museum is, in fact, America’s first. Needless to say, over the centuries the Museum has acquired many incredible artifacts. A myriad of items exemplifying the rich history of South Carolina, the Lowcountry, and Charleston itself are on display permanently. However, one must also wonder about the artifacts not typically displayed in our formal galleries. Furthermore, with such a magnificent, vast collection as well as an intelligent and passionate curatorial staff, The Charleston Museum has incredible resources. We would like to use these resources to share more with the public. Therefore, the Museum will now be offering a special monthly exhibit, titled Storeroom Stories, which highlights a specific and unique artifact, personally hand-picked by a curator to share with the public.

A “story” related to each item will be included along with its description, providing the viewer a unique and intimate perspective on each individual piece. This an incredible opportunity for the public to take a look into our collections as well as see some of the items that our curators are most excited about sharing with you! We invite you to keep up with Storeroom Stories via our website, blog, Facebook, or twitter account. Please come and take a peek into our storeroom, view some of the pieces our curators our most passionate about, and learn the story behind these incredibly historic items!