by Grahame Long, Curator of History

People ask me all the time: “What’s your most favorite thing in the whole museum?” or “If the place were on fire, what would be the first thing you would grab?” As you might expect, it is next to impossible for me (or really any curator) to pick any one thing over another. Kind of like picking a favorite child – it just doesn’t seem right, and it’s probably not a good idea to begin with. For me, prioritizing of any sort is especially difficult within the Museum’s silver collection. There’s just great stuff in there both on exhibit and in the storage vault, and all of it screams of centuries-old Charleston artisanship as well as decades of research and collecting. Nevertheless, if I were whipping-post-tied, feet-afire, gun-to-my-head forced to choose some favorites I think I would have to go with these in no particular order: 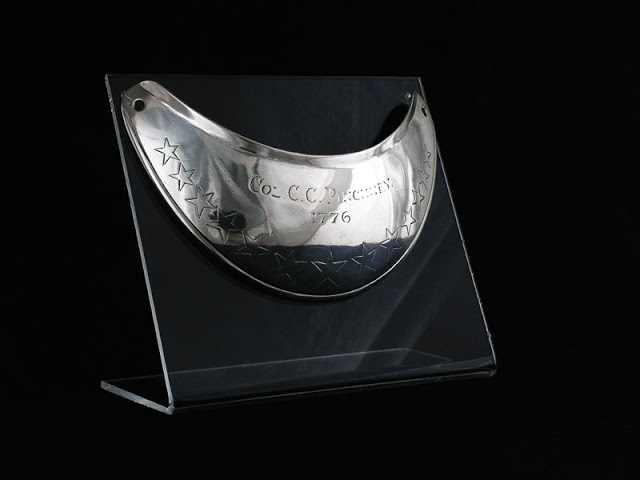 Charles Cotesworth Pinckney’s gorget (pronounced gore-jit)
These things have been around in one form or another since the Middle Ages and survive even today within certain military units. Traditionally a component of a suit of armor, the gorget served as a protective plate over the seam between the combatant’s helmet and breastplate. As full body armor became less useful over time, gorgets shrank in size and eventually became a communicative symbol of rank. During the American Revolution, both British and Patriot forces employed gorgets in their uniforms. This particular piece belonged to Charles Cotesworth Pinckney, signer of the United States Constitution and 1803 presidential candidate. The gorget itself was made by master Charleston Silversmith John Vanall circa 1750. (The engraving was very likely done sometime after the war as a commemorative gesture.) 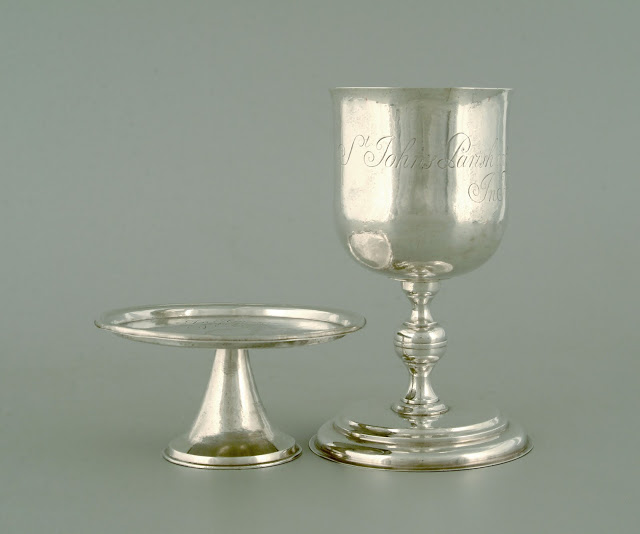 Strawberry Chapel’s Paten & Chalice (this is not pictured in the catalog – you will just have to stop by the gallery for a visit!)
These Holy Communion pieces are two of the four oldest surviving pieces of Southern silver. Made circa 1705 by Miles Brewton, one of Charleston’s earliest silversmiths, The Charleston Museum is lucky to have these items. In fact, we’re lucky they even survive at all. In 1863, with the silver already over 150 years old, the items were buried along with the rest of the church silver in an effort to keep them hidden from marauding Union forces. The tactic worked. The silver remained safe underground throughout the remainder of the war. What didn’t work, however, were the recovery efforts made by members of Strawberry Chapel’s congregation after the war ended. Miles’ Brewton’s famed paten and chalice remained underground, almost lost to time, until they were finally discovered and excavated – in 1946. 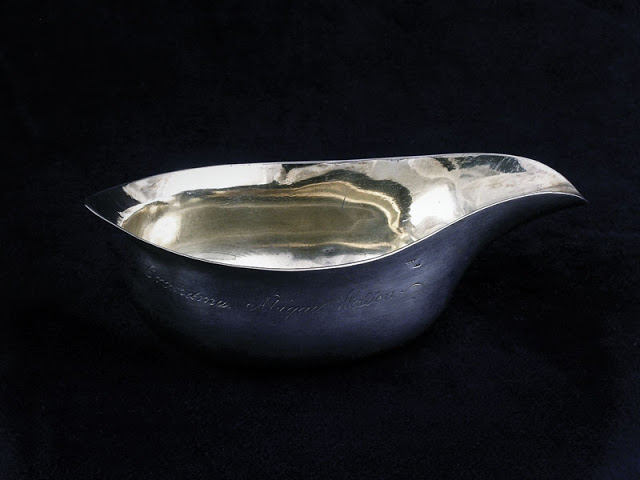 Abby Maria Barnes’s Pap Boat
I’ve come to realize that when most folks think of silver, their immediate thoughts are those of lavish items geared toward some form of food service like tea sets, soup tureens, forks, and spoons. However, there is a whole other world of “practical” silver that is often overlooked. Charleston silversmiths made plenty of other things besides fancy dining room accoutrements. For example, John J. Lafar made copper slave tags for the city’s tax system, John Ewan made medical tools, and even famous Bostonian silversmith Paul Revere made dental picks. (There’s one in the Waring Library at MUSC). That’s just one of the things I love about little Abby’s pap boat. To be sure, this device would have indeed been a luxury item for its day: a finely hammered, coin-silver form with a gold-washed interior bowl expertly crafted by Charleston silversmith Henry Westermeyer circa 1790 and engraved: “Abby Maria Barnes / given by her Grandma Abigail Walden.” However, a pap boat is not so much a fine dining accessory as it is an essential instrument in healthcare. These feeding devices were designed for use on those who could not feed themselves – the terminally ill for example, the wounded, the elderly, or in this case, an infant. Most pap boats I find in antique shops and other museum galleries are usually porcelain, which, like Abby’s silver one here, were reserved for home use. Other boats of more durable materials like tin, copper, or pewter (I even saw one cast from lead once), were primarily used in hospitals or by physicians as a means of force-feeding pap – or semi-liquid food – into a patient.

The South Carolina Society’s Rice Spoon
So, what is a rice spoon really? Simply put, a rice spoon in any other region in any other state or nation would likely be referred to as a “dressing” or perhaps “serving” spoon. However, if that same spoon were made or used in Charleston, you can bet the plantation it would be forever branded as a rice spoon. After all, rice almost single-handedly created the Lowcountry’s agriculture empire during the 18th an 19th centuries. Revered for its economical dominance, tailors embroidered rice’s likeness on clothing, cabinetmakers incorporated it in bedposts, and silversmiths catered wares dedicated to its presentation at the supper table. Of course, besides being uniquely Charleston in name, this spoon is one of probably less than five items left in the world that we can attribute to Moreau Sarrazin, a Huguenot silversmith who worked in Charleston from 1734 until his death in 1761. This particular spoon is engraved with the South Carolina Society of which Sarrazin became a member in 1737 and elected its clerk in 1738.

“Charleston Silver” features images of Charleston silver and other historically significant objects related to silversmiths from the collections of the Charleston Museum. It includes pieces both made by local artisans and imported local retailers.