On Parade, Into Battle: Women’s Uniforms

Included in our new exhibit, On Parade, Into Battle, is a selection of uniforms relating to the history of women in the military. Today, a woman can enter any branch of service and perform any duty, short of combat. However, this has not always been true. Women were first officially allowed to join the service during World War I in order to serve stateside, allowing more men to go overseas for battle. Of course, these servicewomen were to be discharged as soon as the war ended.

On display in our new exhibit will be a Navy Yeoman (F) uniform, worn during World War I by Alice Paulina Trapier Hayne of Charleston who volunteered her services in 1917. These Yeomanettes worked as radio operators, stenographers, nurses, messengers, chauffeurs and other capacities.  By the end of the war, there were over 12,000 Yeomanettes. Also presented in On Parade Into Battle is a woman’s Marine Corps uniform worn by Susan Corbett, a corporal in the quartermaster’s department stationed in Charleston. Three hundred women served as Marines during World War I. 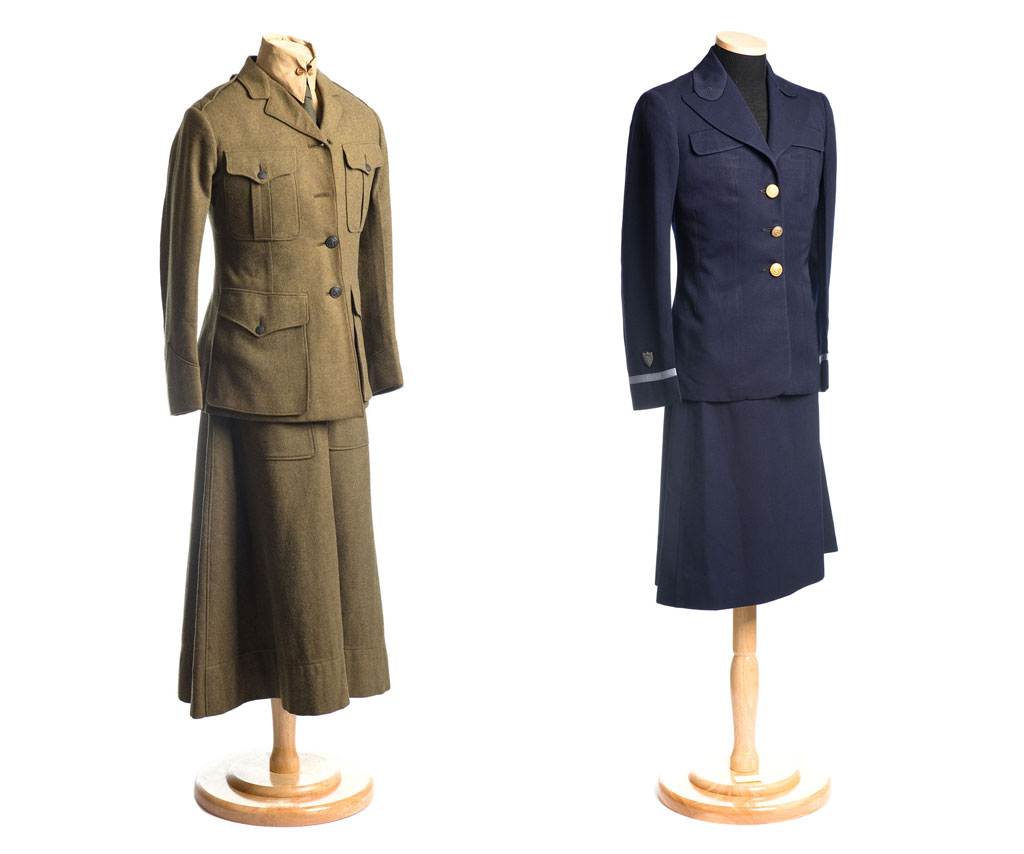 Like men, after the Japanese attack on Pearl Harbor on December 7, 1941, women were eager to serve their country, and the number of women in the U.S. armed forces increased dramatically from World War I levels. Again, they were only permitted to join the various branches of service for the duration of the war, and over 150,000 women served during World War II, in all branches of the military. The Museum’s Coast Guard SPAR uniform was worn by Betty Jean Wolf, stationed in Charleston during World War II. SPAR is a contraction of the Coast Guard motto: Semper Paratus (Always Ready).

A Navy WAVES uniform, worn by Lt. Cmdr. Mildred McFall can also be found in this exhibit.  Lt. Cmdr. McFall was one of the first to enlist and serve with the over 80,000 women who joined the WAVES, performing clerical duties and jobs in aviation, medical, communications and technology.

An Army Nurses Corps uniform, worn by Ruth Chamberlin, who served in North Africa, Italy, France and England during World War II, is also on display. The all-female Nurse Corps (both Army and Navy) had been established in the early 20th century for service during peacetime as well as during times of war. During World War I, some of these nurses sailed for Europe before American troops arrived.

The female uniform had been a bit of a problem for these earlier corps. It was expected that women would wear skirts in uniform, as in daily life. Some branches turned to well-known designers for styling (Mainbocher for the Navy in World War II, Hattie Carnegie for the Army in 1950s). Make-up and hairstyles followed current trends. For example, red lipstick was mandatory during World War II – it was considered a morale boost for the servicemen – Elizabeth Arden even developed a shade called Montezuma Red to match the red stripe in the Marine Corps uniform. Only quite recently have women soldiers been offered more versatile options in their dress code.

The Women’s Armed Services Integration Act of 1948 finally enabled women to serve as permanent, regular members of the armed forces in the Army, Navy, Marine Corps and newly formed Air Force. But it was not until 1975 that President Ford signed Public Law 94-106, requiring the services to open the military academies (West Point, the United States Naval Academy and the Air Force Academy) to women.