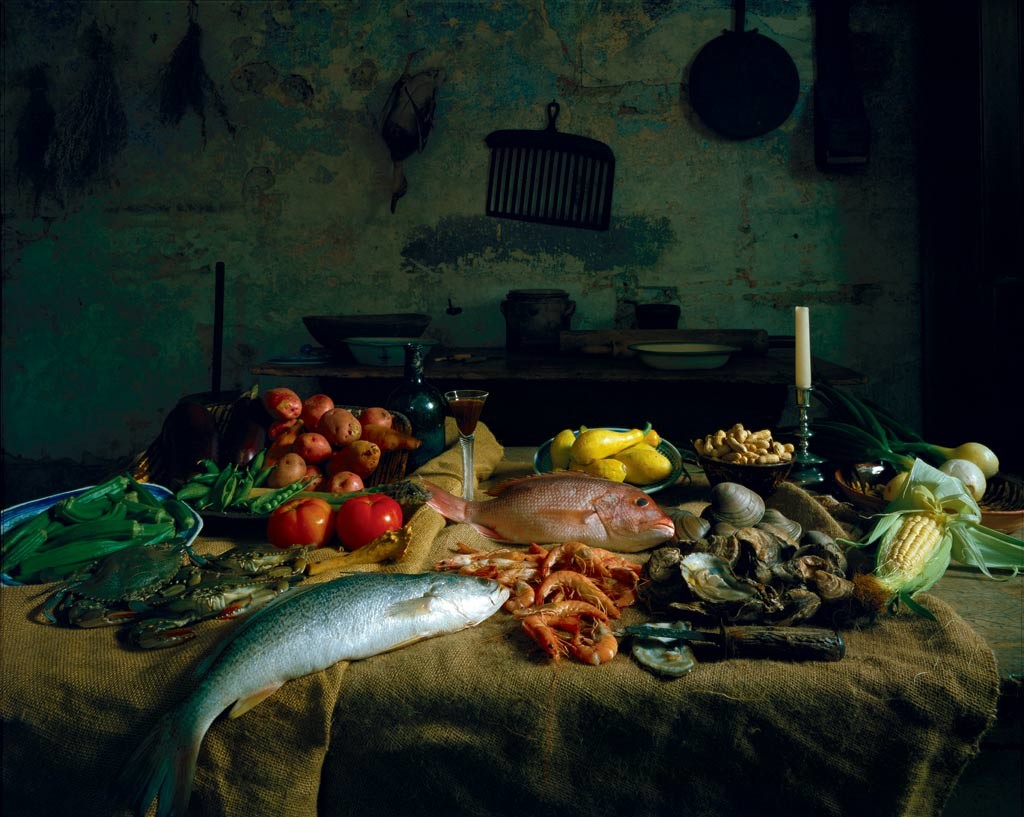 The Heyward-Washington kitchen is the setting for this image by Terry Richardson that captures Charleston’s bountiful coast.  The remains of many of the foods shown here were retrieved from the cellar of the Heyward kitchen.

In 1851, the South Carolina Society for the Improvement of Domestic Poultry held its first annual exhibition in Hatch’s Hall on Hassell Street. A report of the executive committee pronounced it a rousing success.  The exhibition featured ducks, geese, pheasants, and varieties of “domestic fowls”, or chickens.  It also featured “white and wild turkies.”1

The Charleston Museum’s archaeological collections also contain “white and wild turkies.”  Animal remains are among the most common artifacts retrieved from archaeological excavations in Charleston.  Studies of these remains by Dr. Elizabeth Reitz of the University of Georgia have provided unique and illuminating glimpses into everyday life in the city and in the Carolina lowcountry.  The animal remains we recovered allowed us to draw a lively picture of city life beyond the elegant historic house museums, from the first decades of the Carolina colony to the end of the nineteenth century.  The faunal materials suggest that Charlestonians took advantage of the bounty of the lowcountry and harvested a variety of animals, some of which we no longer eat. Wild animals augmented a diet dominated by beef, with lesser amounts of pork, mutton, and chicken.  This varied diet persisted through the centuries.

Turkeys are a North American bird, and wild turkeys are common in the southeastern U.S.  It is difficult to determine whether the turkeys recovered from Charleston are wild or domestic, but they are likely the former. The physical characteristics of the archaeological turkey bones suggest they were wild.  Many turkeys were trapped, rather than shot.  Trapped birds could be pinioned; the large primary flight feathers were removed, leaving the bird unable to fly.  Pinioned birds were fed and kept in the yard until needed.  Such local wild birds probably co-existed in the barnyard with fully domestic birds, perhaps interbreeding with them. Domestic turkeys were not common until the mid-19th century, and the 1851 exhibition clearly included both.

So, were Charlestonians serving turkey on festive occasions?  Yes, probably, but as only one of many meats.  A menu for a dinner party, described by a visitor in 1832, included “turtle soup, fish, venison, boiled mutton, roast turkey, boiled turkey, a ham, two boiled salted tongues, two tame ducks, two wild ducks…2

Although a single sumptuous meal such as the one described by this clearly impressed visitor does not equate to a regular diet, our studies indicate that Charleston residents, particularly wealthy ones, did enjoy a rich and varied diet.  One of the chief characteristics of Charleston’s archaeological menu is its richness, which means the number of different taxa, or animals, found in the city’s archaeological record. Charleston assemblages contain 127 taxa that were part of the lowcountry menu, including 62 fish. Some foods were commonly eaten; beef, pork and chicken. A second tier of common taxa include deer, sheep or goats, Canada geese, turkeys, and diamondback terrapin.  Overall dietary diversity is low, due to the dominance of beef in the diets of all Charlestonians.

This is one of the interesting features of our own diet.  Although most of our meals consist of only a few items that we consume regularly, we value a rich, diverse diet, drawing upon many sources of food to accompany the old standby.  Charlestonians apparently ate a great deal of beef, but they also killed a chicken from time to time, ate fish, roasted a turkey or goose, and enjoyed turtle soup.  They varied their diet with sufficient frequency for that variety to be reflected in the archaeological record. Turkey was just one of many dishes to grace an elegant table.