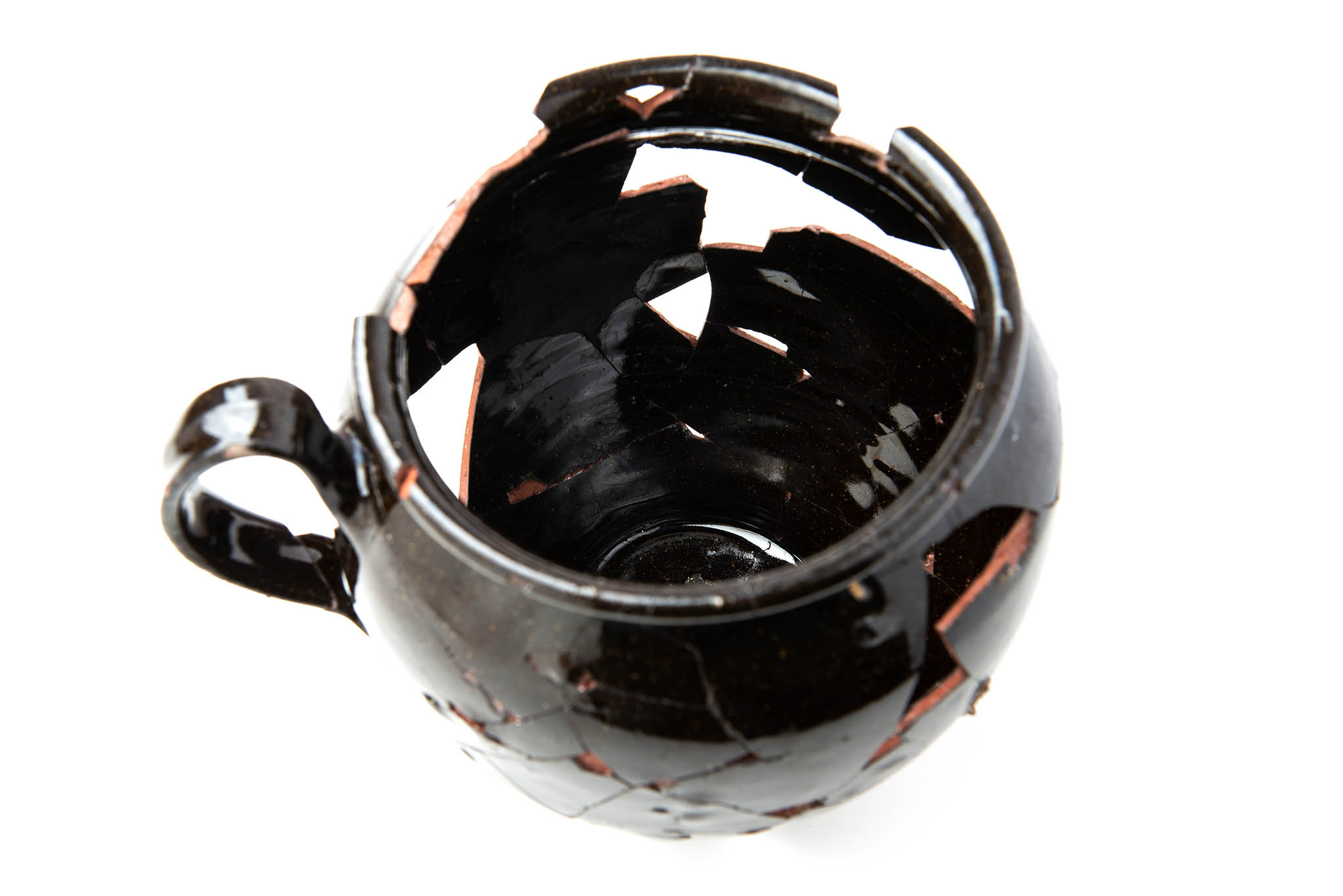 Conservation of museum collections usually involves those objects that are fragile or unstable.  Textiles such as Eliza Lucas Pinckney’s dress, furniture such as the Robert Walker bed at the Joseph Manigault House, or wood from archaeological contexts such as the pilings from the city’s early fortifications often require conservation treatment for their long-term preservation. But more stable, mundane objects benefit from professional conservation in certain cases. We recently collaborated with the Warren Lasch laboratory to conserve an unusual colonial earthenware vessel, one that is now ready for exhibition.

The redware vessel (ARL 9687) was excavated in 1980 by Dr. Elaine Herold of The Charleston Museum.  Known then as the Meeting Street Office Building site (there were very few new office buildings at that time), the site is located at the southwest corner of Meeting Street and Horlbeck Alley. The excavations were salvage in nature, conducted during construction.  The primary goal of the project was to search for the Carteret bastion, the northwest corner of the early 18th century walled city.  No evidence of the bastion was discovered, but several large features were salvaged.

Our redware vessel came from feature 2, a large pit damaged by the bulldozers and tentatively designated a privy pit.  The feature produced four vessels. A very unusual, tin-enameled chamber pot with double handles is likely French. This vessel is on permanent exhibition in our Lowcountry gallery.  Others include a porringer of French faience (faience brune), and an English delftware chamber pot.

For many years, we expected that the redware vessel was the product of American potteries in the mid-Atlantic region, though its form was unusual.  And we expected that it dated to the late colonial period. But a visit last fall from ceramics expert Dr. Lindsay Bloch of the Florida Museum of Natural History gave us an opportunity to learn more about the earthenwares in our archaeological collections.  Dr. Bloch suggested this vessel is English, from the coal measures region, and likely from the early 18th century. 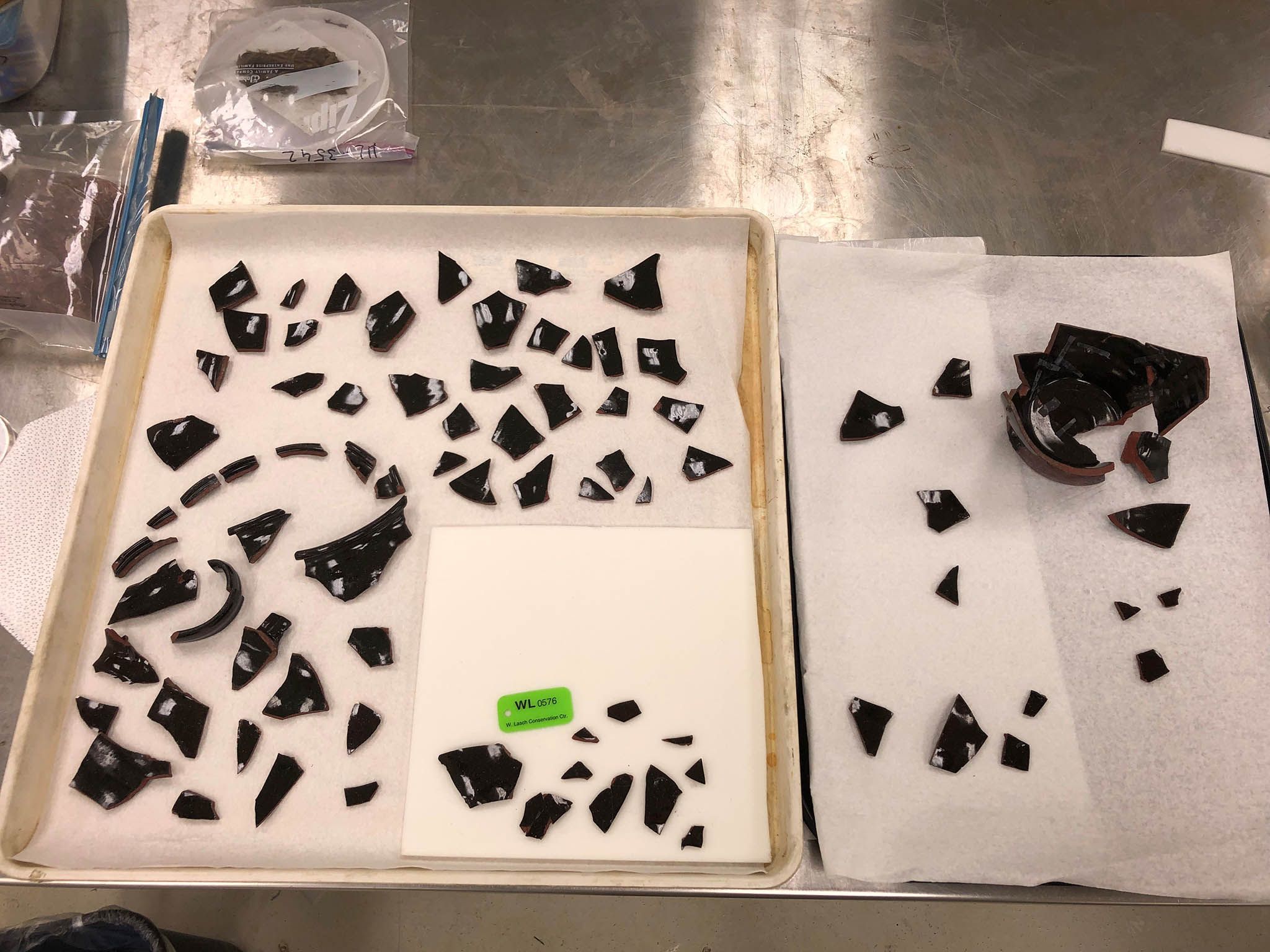 But our vessel was in poor condition, as a result of an incomplete restoration by a volunteer conservator in 1980.  The vessel was glued and missing portions were filled with plaster. Ten fragments from the vessel remained in a separate bag. A large area of infill plaster in the center of the vessel had slumped during drying, resulting in a misshapen profile.  The rim was unfinished. The interior was covered with plaster, and a finish coat had yellowed. As a result, it has never been exhibited.

A fortuitous meeting with two conservators from the Clemson Warren Lasch Conservation Center, Gyllian Porteous, and Anna Funke, during Dr. Bloch’s visit, led to the restoration of this unique vessel. Under the direction of Dr. Stephanie Crette, Gyllian and Anna submitted a conservation proposal that was accepted by the Museum’s curators and Board of Trustees.

The first step was to remove the old fills and repair from the ceramic body, using an acetone vapor.  The plaster fills separated easily from the sherds but left white residue on the break edges. Dental tools and bamboo skewers were used to remove the residue from the edges and surface.  Once the vessel was completely deconstructed, Gyllian and Anna were able to reconstruct the jug, using a conservation-grade adhesive, and place the ten previously un-mended fragments. This produced a more complete vessel.  Only two small structural fills were required to ensure stability. These were toned to resemble the color of the glaze.

The results speak for themselves.  The “new” earthenware jug has a more rounded profile.  Visitors and scholars alike can focus on the form and finish, rather than the intrusive mends. Our artifact is now ready for exhibition.  Thanks to Gyllian, Anna, and the Warren Lasch Conservation Center.