“Like Meteors Crossing Each Other and Bursting in the Air” 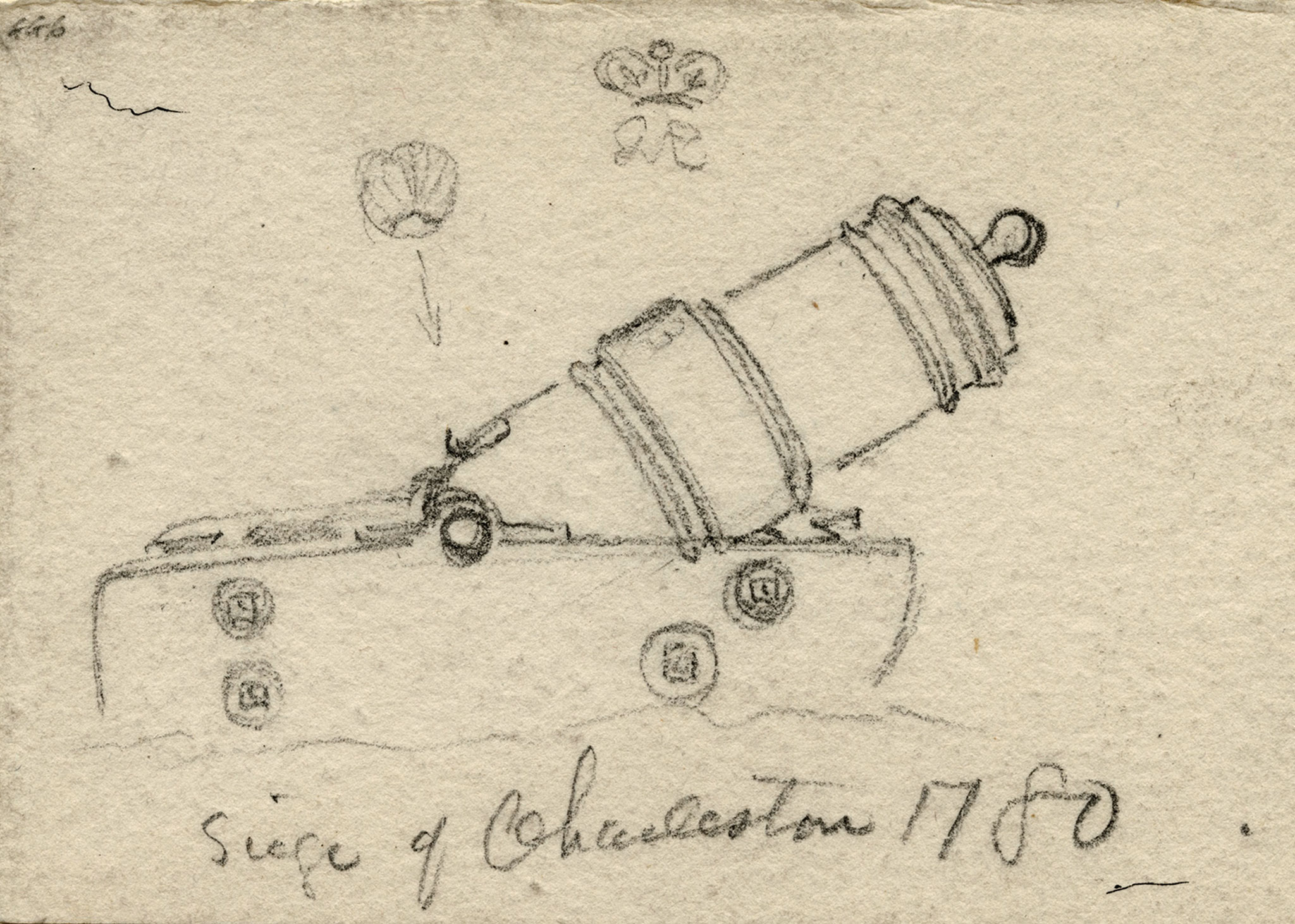 May 12 is the anniversary of the end of the Siege of Charleston and mortars were used extensively during the siege. A friend of the Museum recently doing research in the Louisiana Digital Library identified a sketch of a Revolutionary War mortar that was labeled “Siege of Charleston 1780.” Per the description in the database, the original is from the Historic New Orleans Collection and was created by Alfred R. Waud, who contributed sketches of military scenes to Harpers Weekly during the Civil War. Waud most likely drew this mortar while passing through Charleston prior to the outset of the war.

Mortars are short-barreled artillery pieces that fire projectiles, usually explosive shells, at a high angle, the same concept used today in modern military mortars. The mortar in the Waud sketch appears to be mounted in a substantial frame, probably of wood, and has a tompion in the mouth of the barrel to keep rain out. 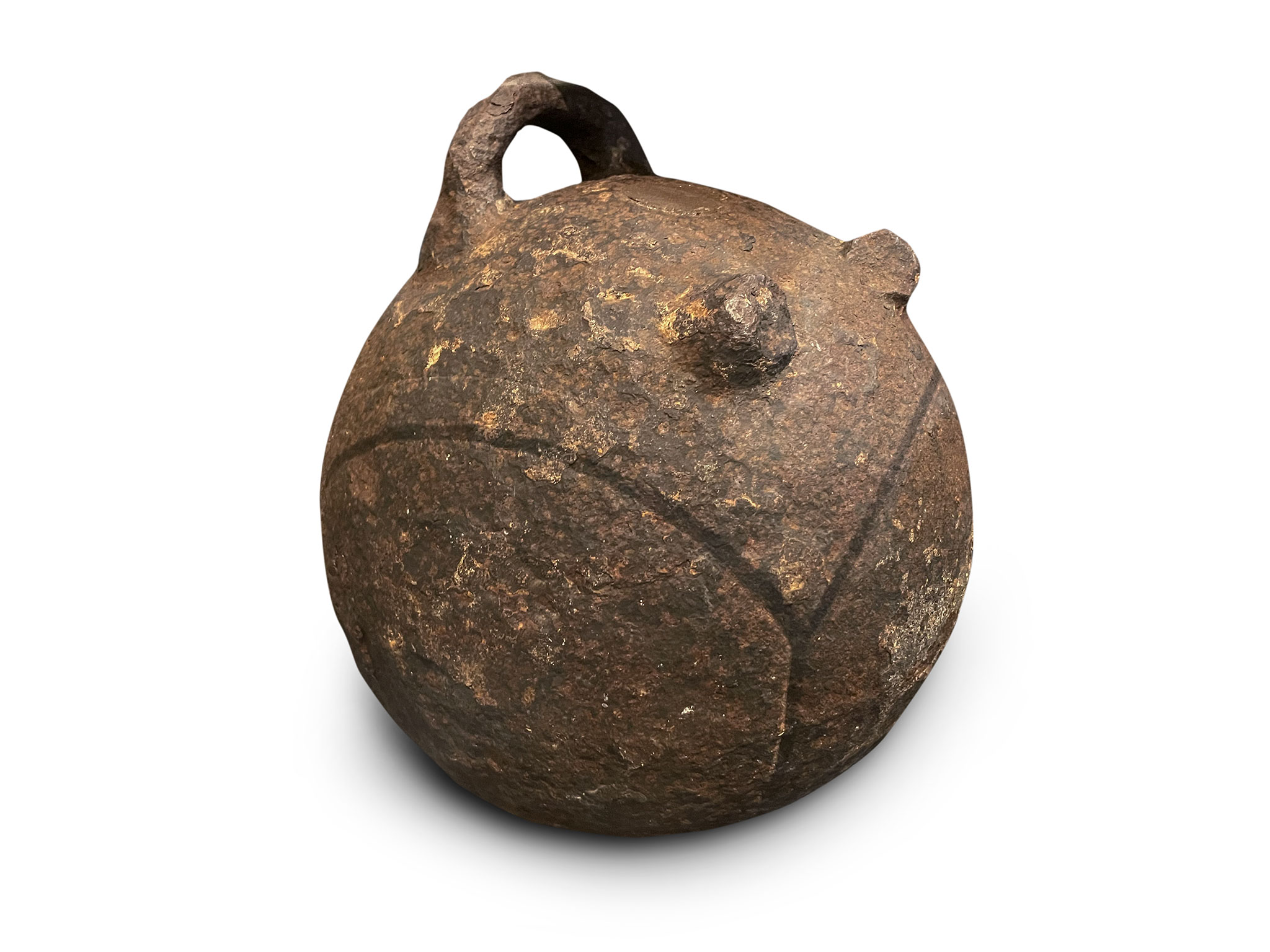 13” shell from The Charleston Museum’s collection. One of two handles which was used to load the shell into the mortar has been broken off and the fuse hole has been sealed.

Revolutionary War mortars were designated by the diameter of the shot they fired. The largest and most destructive, the 13” mortar, weighed as much as 3,600 lbs., making it difficult to transport. Because of their unwieldly size and weight, these artillery pieces were much more appropriate to siege or fixed fortifications, where they did not have to be moved much. The Museum has on display in its Becoming Americans exhibit a 13” shell that dates to the Revolutionary War. Hollow on the inside, the shell would have been filled with gunpowder and a fuse inserted in a fuse hole which burned down while the shot was in flight. The idea was to properly set the fuse’s burn time so that it exploded when it reached the enemy lines. If the fuse burned too quickly and the shell went off prior to reaching its destination it could cause little damage. According to one British source, an artillery officer on the American side skilled in creating fuses was killed early in the siege, which the British believed allowed them to approach the American defenses more quickly.

In a siege, solid shot fired from field pieces caused some casualties but was primarily used to knock down the defensive works. Shells had the potential to cause greater casualties, since they had explosive force and sent shards of metal flying in multiple directions. A company of the Royal Artillery participated in the Siege of Charleston and fire from their mortars was apparently quite effective against the patriot defenders. General William Moultrie, who commanded on the American lines, reported that men were frequently killed or wounded by the exploding shells fired from British mortars. He noted that one 13” shell fell within ten yards of the main powder magazine. Johann Hinrichs, a Hessian officer serving with the British, observed that a shell fired by he and his men from a small mortar blew up an American gun platform and propelled two of their solders into the ditch in front of the fortifications. Moultrie’s description of the final night of firing between the two sides gives an idea of the nature of artillery barrages during the siege. Moultrie recorded “the mortars from both sides threw out an immense number of shells; it was a glorious sight, to see them like meteors crossing each other, and bursting in the air; it appeared as if the stars were tumbling down.” 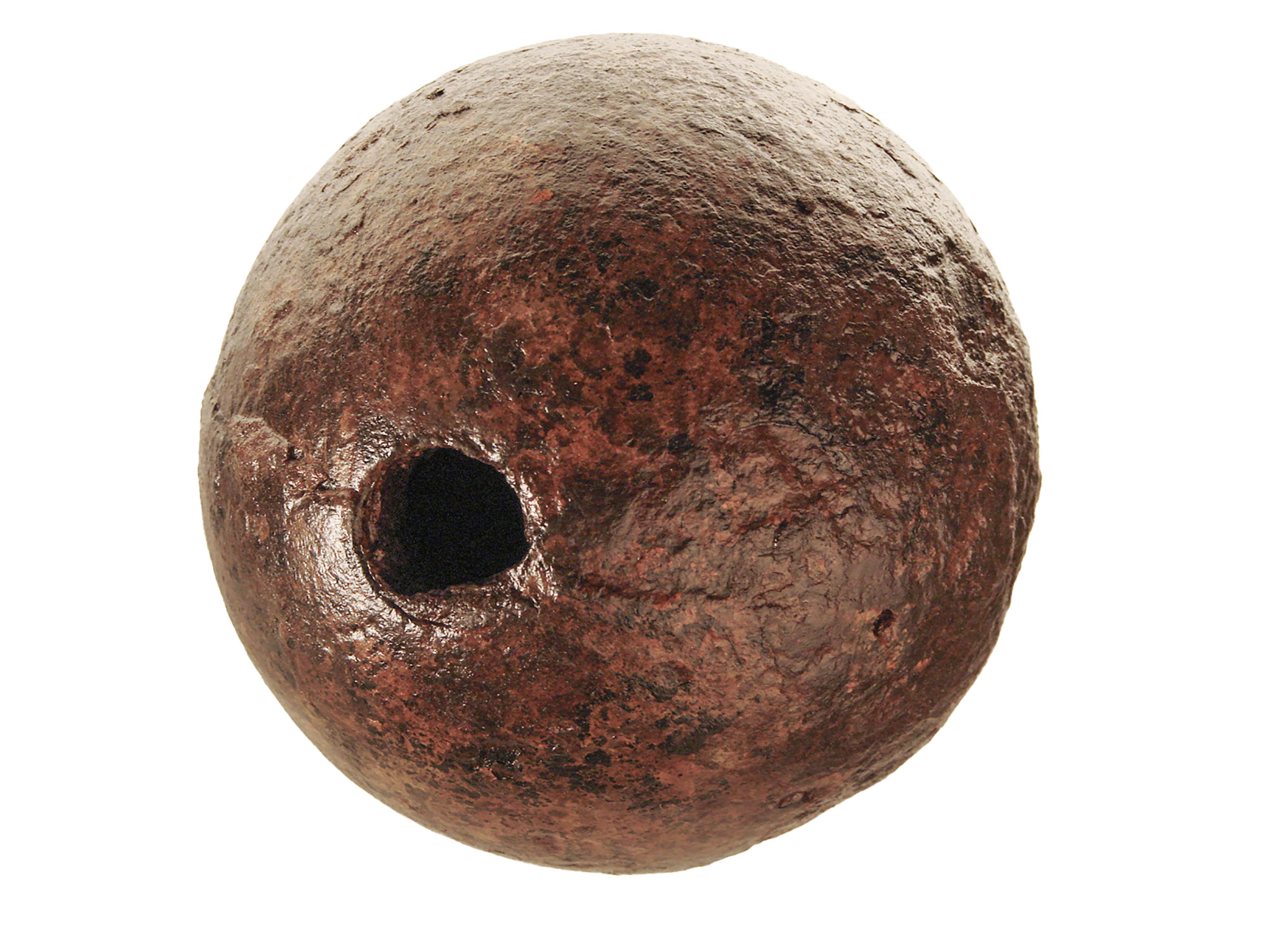 5 ½” shell, which clearly shows the fuse hole, discovered during renovation of the Gaillard Center in Charleston. Powder was inserted into the shell through this hole which was then sealed with a cone-shaped fuse. Image Courtesy Eric Poplin, Brockington and Associates

Evidence of these bombardments has been identified recently. During the renovation of the Gaillard Center in 2013, a 5 ½” shell was found, which was almost certainly launched from the British lines into the city. Mortar fire would have been terrifying to Charleston’s inhabitants, and most of the twenty civilian casualties during the siege were probably caused by mortar shells. This is definitely something to consider next time you are in the Museum and see what seems like an innocuous piece in the Revolutionary War display. Coming in at a high arc, with a trail of sparks behind it, and possessing significant explosive force, ordinance like the Museum’s example struck terror into those living in and defending the city in 1780.