Still trying to cool off in these dog days of August? You might think that a quick trip to the beach for a dip in the ocean would be a great way to cool off. Today, it might be, but for women in the Lowcountry, that hasn’t always been true. Until the 1890s, women could really only take a dip into the water essentially fully clothed. As late as 1870, public baths and beaches had separate times for men and women to “swim” or bathe. Finally, by the turn of the century, it was socially acceptable for women to actually swim; women’s swimming events were added to the Olympic Games in 1912, but some of the bathing suits still left a lot to be desired. 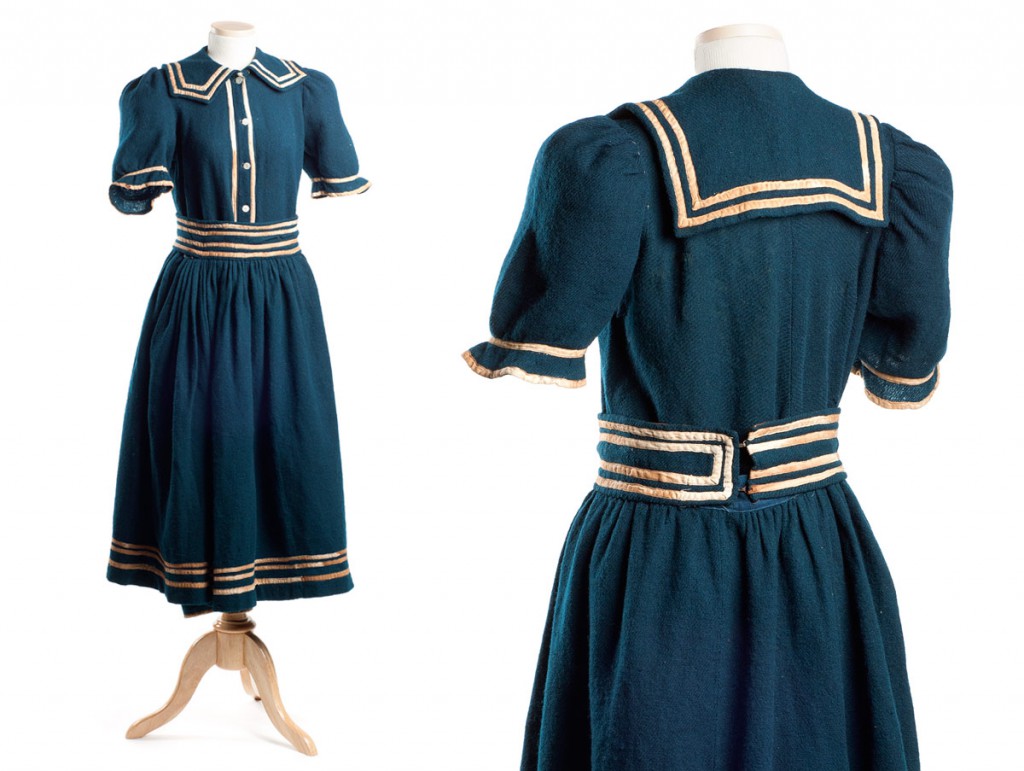 Let’s start by looking at a fetching number from the 1890s. This two-piece suit is heavy wool – the one piece garment is a shirt and pants together, reaching below the knees. The gathered skirt then layered over to create the costume. 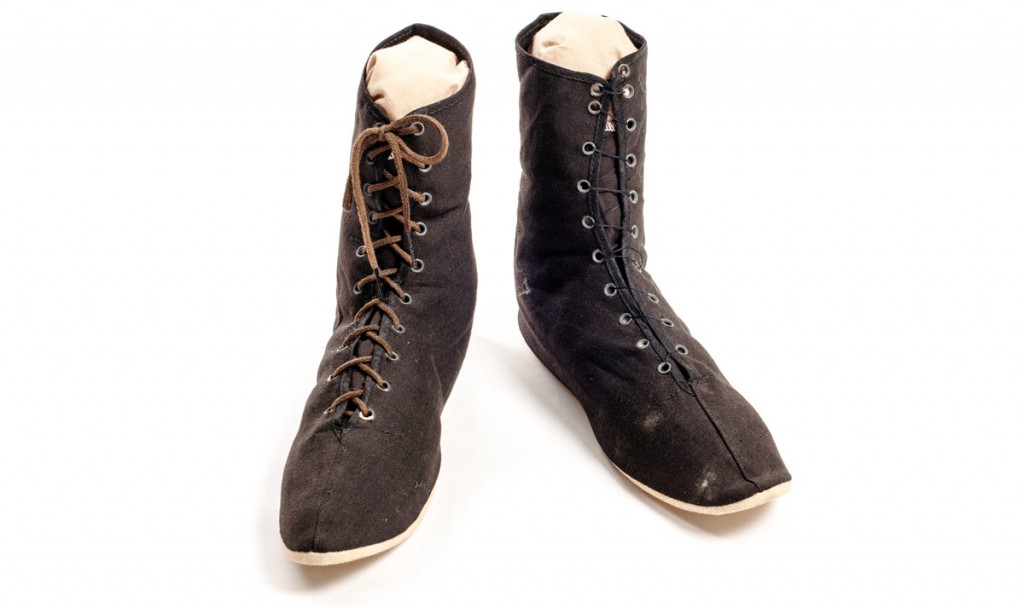 However, the ensemble was not really complete until you added a cap, stockings and bathing shoes, like these canvas lace-ups. One good wave and you’re “swimming” would be finished! 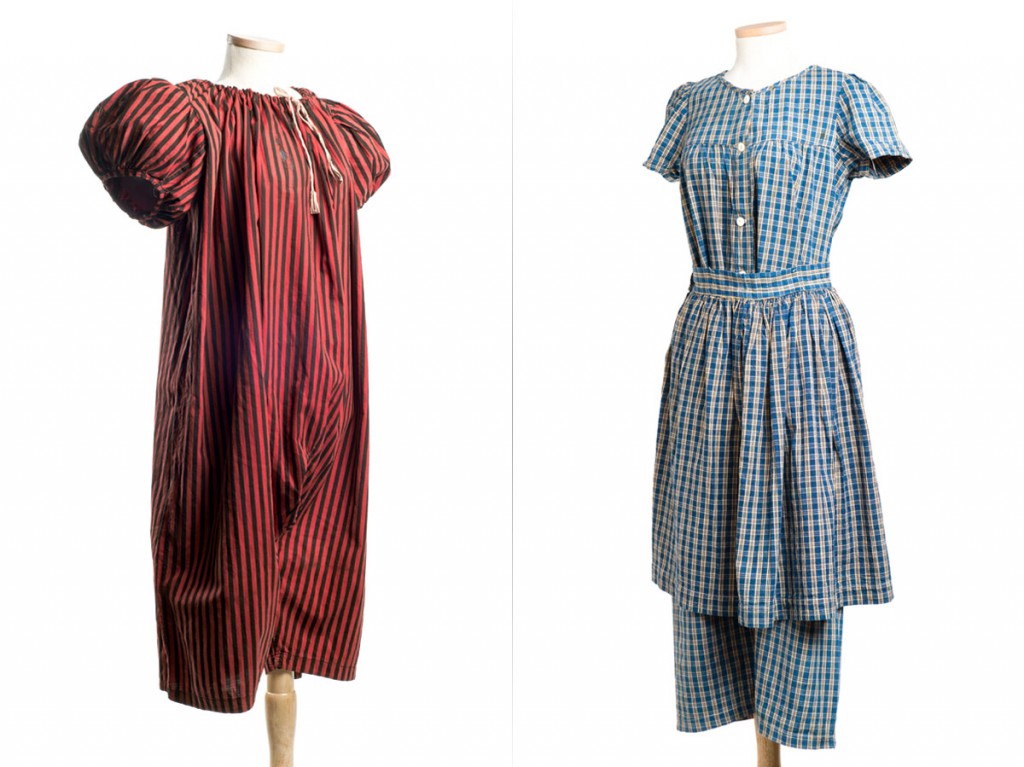 The suit lightened a bit at the turn of the century. These ”figure-flattering” garments are made of a much lighter cotton. The blue plaid suit, like our 1890s example, has a one-piece top and pants with a gathered overskirt. The red and black striped is a voluminous garment with a drawstring neckline and fairly long legs; it was worn by May Snowden of Charleston. But in 1907, Annette Kellerman (Olympic swimmer) shocked everyone by wearing a one-piece suit that revealed her ams and legs and was promptly arrested.

The 1920s saw the first real changes in attitudes toward mixed bathing and sunbathing. It was now acceptable – and desirable – to get a tan, stockings became a thing of the past and the new knitted, form-following swimsuits allowed a more active participation for women. 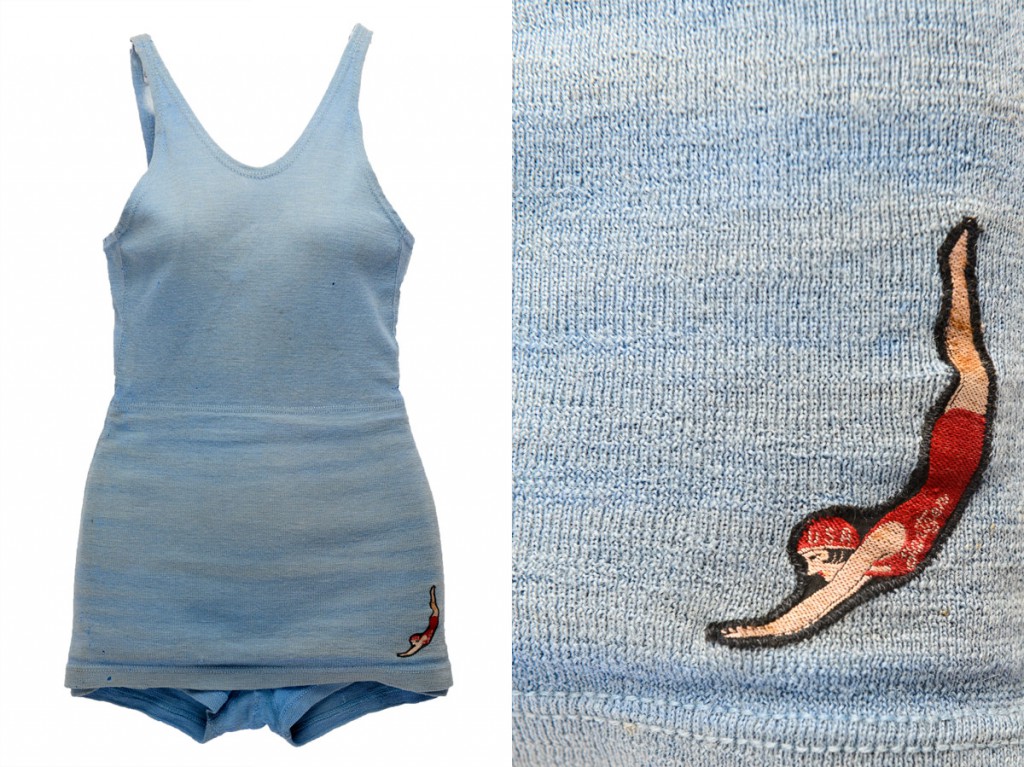 This blue knitted wool Jantzen suit is much more revealing and athletic. It was sold in Charleston at Condon’s Department Store and was worn here probably around 1930. Just remember, that even men had restrictions on exposure. It was not until 1937 that men could go topless – a suit designed with a removable top in 1933 could result in an arrest!
In the 1940s, more flesh could be exposed, what with war shortages and all, and the bare midriff was introduced. They were still pretty modest, though, until in July 1946, French engineer Louis Reard designed a garment “smaller than the world’s smallest bathing suit.” He hoped his design would be as “explosive” as the nuclear test conducted four days earlier near the Bikini Atoll – and it was. At first even the Paris models wouldn’t wear it, but the French actress Bridget Bardot popularized them and the bikini was finally accepted in 1956. 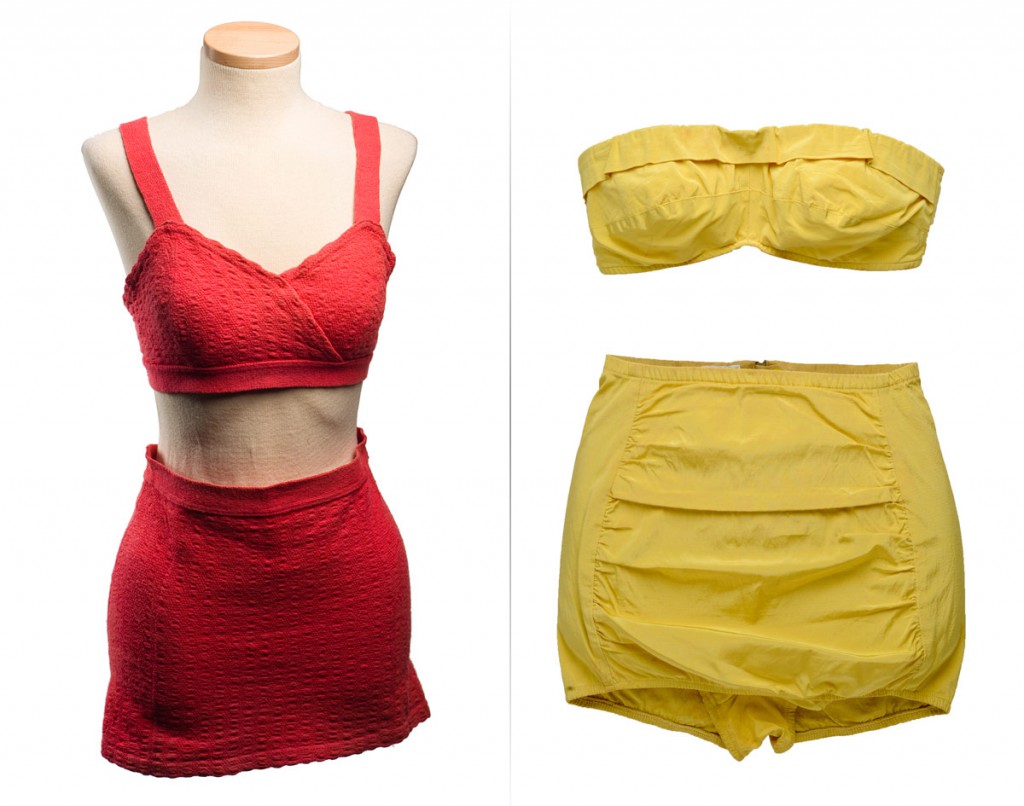