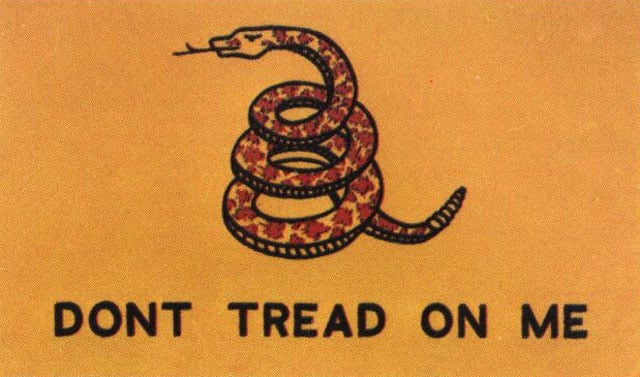 So-called for its designer, Charleston’s own Christopher Gadsden (1724-1805), presented this pattern in 1775 first to Commodore Esek Hopkins, commander of the brand new United States Navy established by General George Washington. Later, Gadsden presented a second flag of the same design to South Carolina’s state Congress upon their February 1776 convening in Charleston.

Although there is debate as to whether the depicted rattlesnake is that of an Eastern Diamondback or Canebrake, the image was first used satirically by Benjamin Franklin in the 1750s, but over the next several decades came into its own as an American icon similar to the Bald Eagle. Like the burgeoning nation itself, Franklin wrote, the rattler “never begins an attack, nor, when once engaged, ever surrenders: She is therefore and emblem of magnanimity and true courage.”

As for the underlying slogan, “Don’t Tread On Me,” this passage utilized by Gadsden reflects the rattlesnake’s general demeanor; a fairly docile animal until threatened or provoked; a behavior that easily mimics those of liberty-minded Americans of the day. As the rattler on Gadsden’s flag appears bearing fangs, coiled, and ready to strike, for an enemy to disrespect these obvious warnings and subsequently step (or “tread”) upon it would be a dangerous decision to say the least. 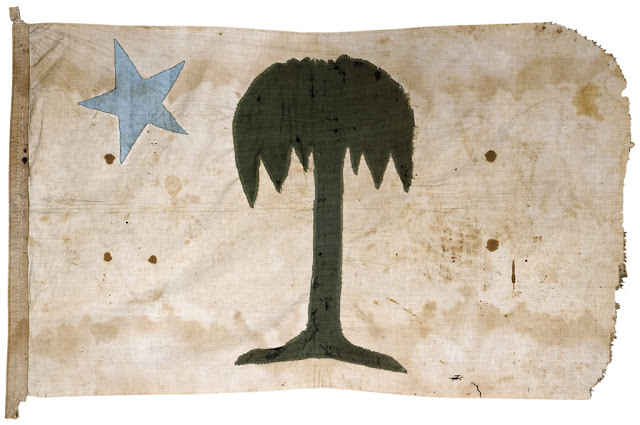 Flag of the Palmetto Guard:

A spinoff of the state flag of South Carolina, why Guardsmen replaced the traditional crescent shape with a lone star remains unclear. Obviously, they did not wish to replicate entirely South Carolina’s already established state flag, choosing instead an equally traditional five-pointed star. This change could possibly be a tribute to the 1861 Bonnie Blue flag, an unofficial banner of the Confederate States, which bears a single white star on a large blue field.

The first variation of the flag of South Carolina, an indigo-blue field (indigo being a major cash crop in the state’s infancy) decorated with a solemn and crescent “moon,” appears initially around 1775. This pattern, created by General William Moultrie in response to a request by the Revolutionary Council of Safety, however, differs greatly from the flag presently used. Decades later in 1861 that the singular Palmetto tree was added to the flag’s center, an homage to Moultrie’s remarkable victory at Fort Sullivan on June 28, 1776, where from an unfinished fortification built from Palmetto logs and packed sand, Charleston patriots fought off nine heavily armed British warships, damaging four and killing more than 100 redcoats.

Interestingly, the crescent “moon” in the top corner of the state flag is still cause for debate. While some believe it is indeed a moon hovering shining its light down over the palmetto, many others are convinced it depicts a French-styled gorget, a uniform adornment commonly worn among Patriot officers as a symbol of rank. 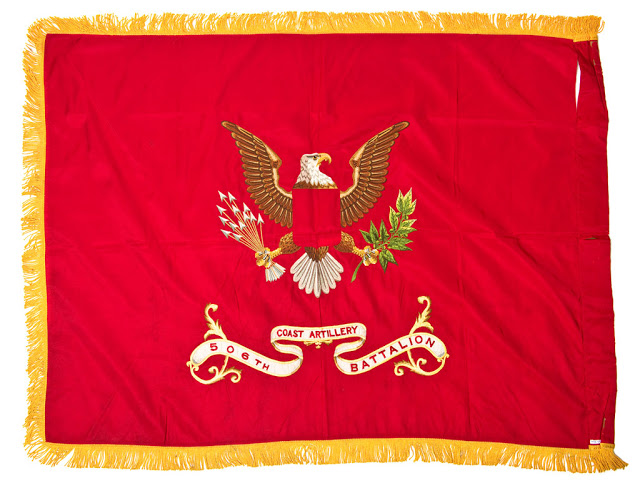 The 506th Coast Artillery Flag:
A branch of the U.S. Army during World War II, the Coast Artillery Corps (a.k.a. the Coastal Artillery) organized and maintained defensive batteries along the U.S. shoreline for the first half of the 20th century. A red field (a traditional color for artillery regiments) bears a Bald Eagle at the center similar to that of the Great Seal of the United States – except for one major difference: This flag shows the eagle with 13 arrows (weapons of war representing the original 13 colonies) held in the eagle’s right talon while a green olive branch, the ancient symbol for peace, is held in its left. The wartime use of the flag is one possibility for this reversal.