News and EventsGeneral NewsEvidence for Cattle Breeds in Colonial Charleston 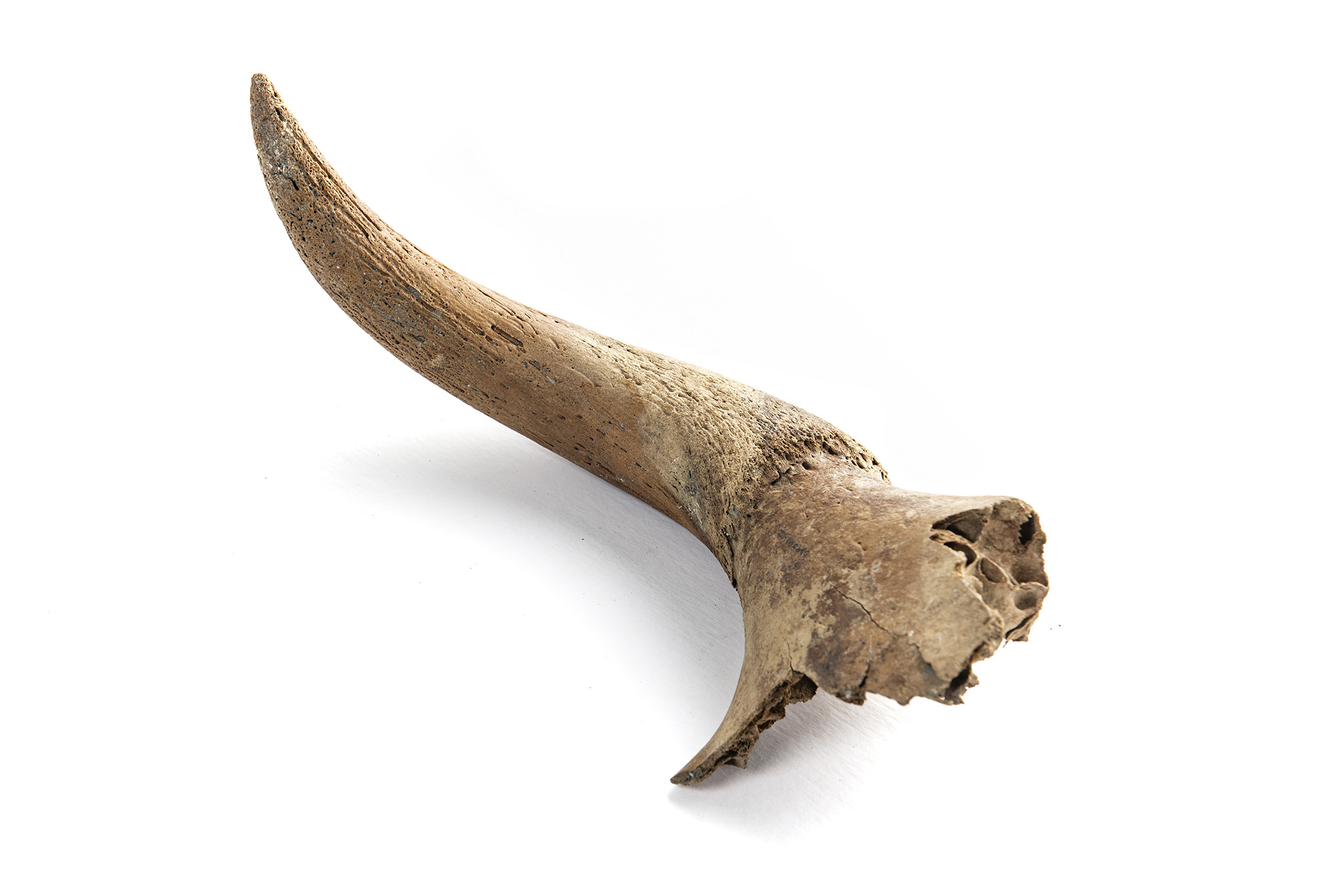 Some visually unassuming, but very important, artifacts have returned to The Charleston Museum after years as research specimens at the University of Georgia. A fortuitous discovery in 1990 during renovation of the South Carolina Railroad buildings for the Charleston Visitor Reception and Transportation Center (VRTC) across the street from the Museum produced a remarkable collection of horn cores. The Archaeology office received a late Friday afternoon phone call from the construction team. 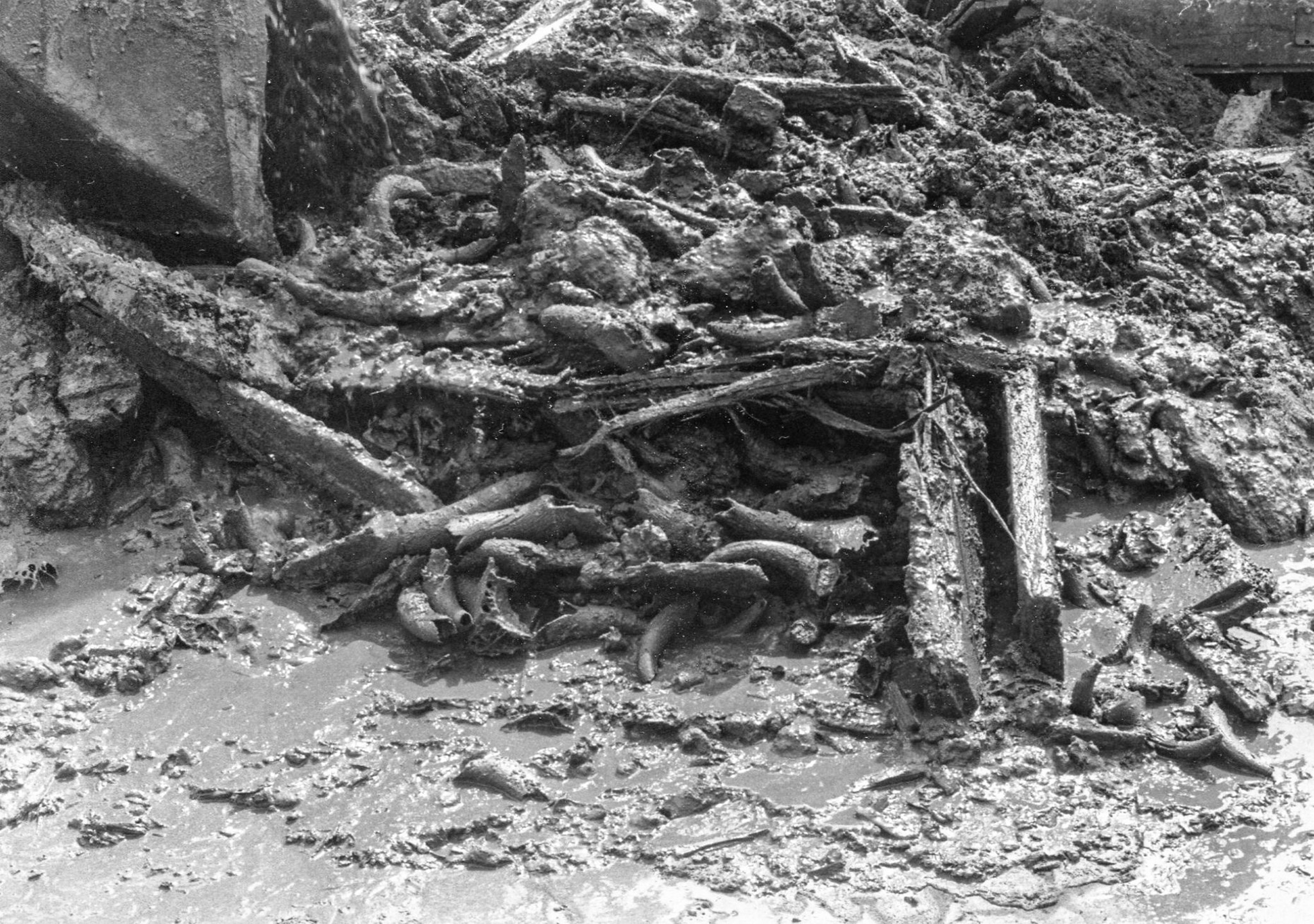 A deep backhoe excavation in the current bus shed had encountered a waterlogged deposit of bones and horn cores. Wooden crates, or retaining walls, were visible in the backhoe cut. I quickly gathered a bucketful from the muddy pile, took a few photos, and sent them to the Georgia Museum of Natural History.  Little did I know how unusual, or valuable, that sample would be. 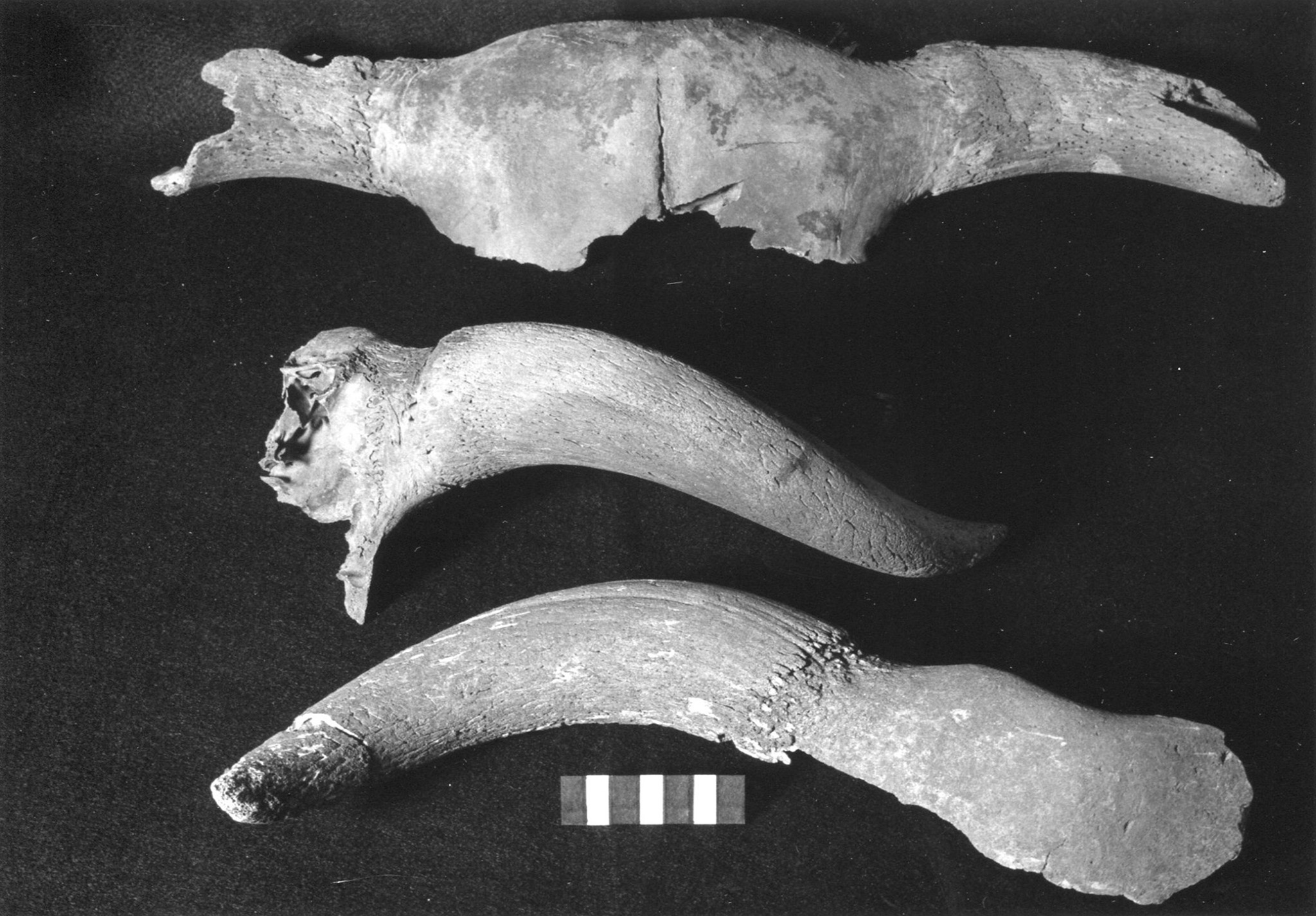 Horn core from VRTC show a variety of origins

Charleston cattle, the basis of the lowcountry diet, show their diverse origins by not conforming to a breed standard.  Horn cores offer some of the best evidence for what these early animals looked like. What we call “horn” is a sheath that lies over the boney horn core. Horn itself was highly valued, but very rare in archaeological deposits. But the horn core underneath is more durable. Horn cores are seldom recovered from American archaeological sites, so each one makes a contribution to the story.  Among the many excavations in Charleston, only the VRTC and the Heyward-Washington house have produced horn cores, though the collections are small. 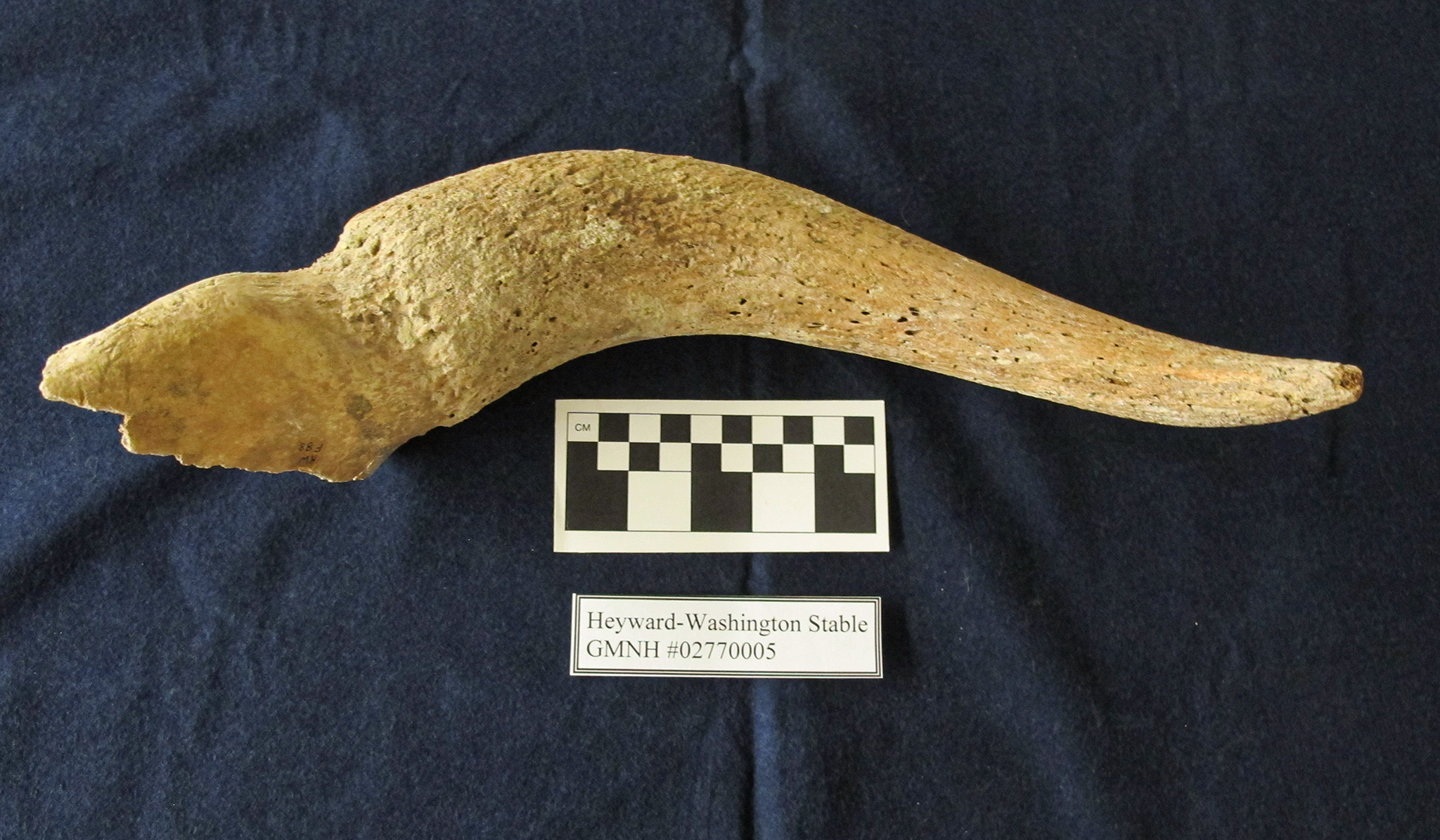 Horn core from the Heyward-Washington House

The seven horn cores from VRTC appear to be debris from a slaughter yard, horn-working industry, or tannery from the 18th century. They apparently were discarded into a creek that once ran beneath the Museum and the Visitor Center. As Betsy Reitz and her students sorted through the sample, it became apparent that more than one early breed was represented.  The horn cores are from short-horn and medium-horn males, females, and oxen (castrated males) that were between two and ten years at age of death. None were the long-horn cattle we associate with western movies. The range of sizes and shapes suggests animals were drawn from several different lineages.

One of particular interest is from a medium-horn female. The core has a distinctive twist about mid-way down the core. Another horn core of this type was among several horn cores recovered from the Heyward-Washington house, among fragments from gunsmith John Milner’s 1740s occupation. These are almost identical to a horn core from San Luis de Talimali, a 17th century Spanish mission located near present-day Tallahassee. Carolina governor James Moore raided Mission San Luis in 1704, and Spanish cattle were among his contraband.  The hardy Florida scrub cattle that descended from Spanish cattle also show this horn shape, as seen on this cow at the Florida Agricultural Museum. 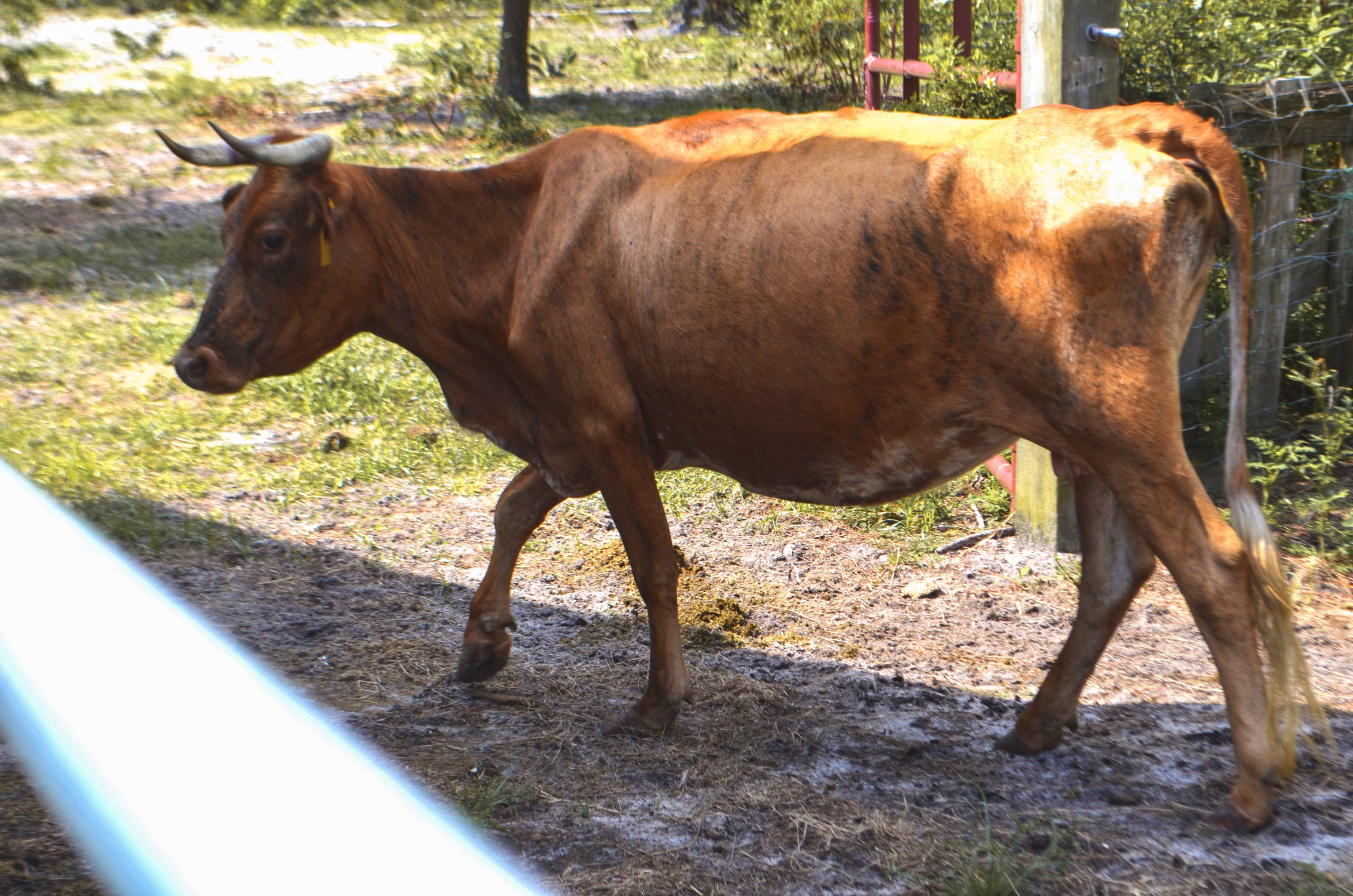 We have faunal evidence suggesting that Charleston’s cattle were a mixture of English and the larger Spanish cattle.  The distinctive horn cores support this idea, and the VRTC horns probably were from animals that originated in many regions, some likely from Spanish missions in Florida.