Last summer The Charleston Museum kicked off its new Quilting Bee program. I have had so many inquiries about our project over the past few months, I thought I’d give you quilt junkies a little update.

Our current project is based on a Chimney Sweep album quilt in our collection. The Chimney Sweep project has two main phases: the collection of blocks and then hand quilting instruction with the public. 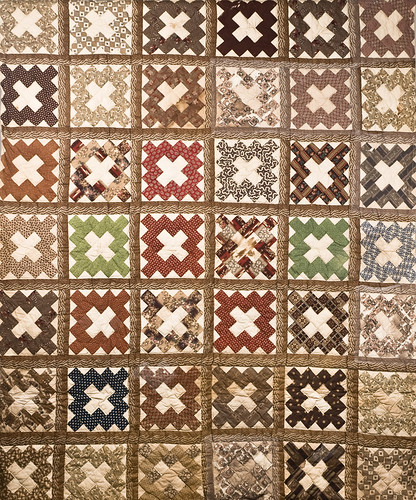 Here’s what our Curator of Textiles, Jan Hiester, told us about the album quilt at the center of our project:

Pieced Chimney Sweep album quilt, 1853. This pattern was very popular for album or friendship quilts in the mid-19th century, probably since a name or inscription could be written in the central cross of each block. Each contributor would sew a block of the pattern in fabrics of her choice and the recipient could add sashing, like the brown print used here, a border perhaps, and then quilt the finished product.

This Chimney Sweep quilt bears signatures and dates of ladies from Sumterville (now Sumter), South Carolina, 1851-1853. It could have been made for a young bride leaving town and moving to Charleston, where the quilt was later found.  Gift to The Charleston Museum in 2008 by Mary Alma Parker 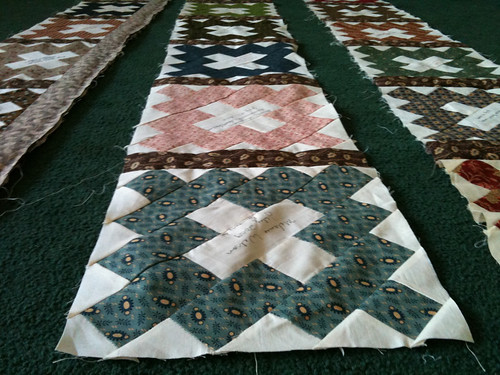 We asked quilters to make and donate a block using the pattern we provided and mid-19th century reproduction fabric. Worried that we wouldn’t get much participation, I asked a few friends and coworkers who quilt to take part. Well, no need! The quilting community, and not just the local one, really bowled us over with their enthusiasm for the project. We ended up with 62 blocks (we were hoping for at least 20) donated by quilters from all over the United States and even Germany! Here are the areas from which we received blocks:

The stories that came in with many of the blocks were just as interesting as the pieces themselves. For example, we had a very young quilter from Oregon submit a block along with her grandmother. One of our California quilters dedicated her block to a former teacher who happened to be a Charleston native. One of my coworkers received hand-quilting lessons from another staff member in order to participate (and she did a lovely job). We even received blocks from a husband and wife. Each block we received was special and received with great excitement and appreciation on my part (going to the staff mailboxes every day was never so much fun!)

Once the flurry of receiving blocks was over, I faced the daunting task of deciding which blocks would be included in the quilt. We couldn’t use all the blocks or we would have ended up with a behemoth of a quilt. The original album quilt contained 42 blocks, meaning we had to eliminate 20 blocks – next to impossible. So, I finally compromised by adding on another row of blocks in order to squeeze in 6 more. I agonized over each block, believe me. Not to worry – the unused blocks will still take an important role in the Quilting Bee. They will be used in a teaching capacity in the public portion of the program, allowing visitors to understand block construction (something hard to do when the project is all basted together and stuck on a quilting frame).

To view all the blocks we received, please visit our Flickr album. 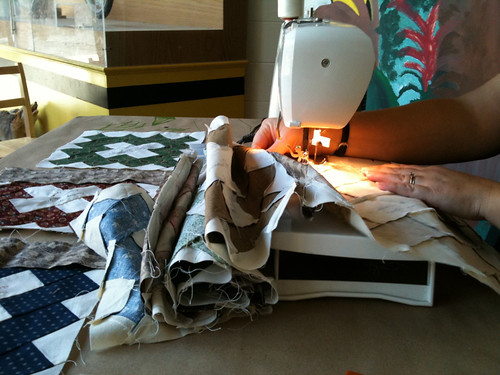 This past week Jan and I worked on piecing together the quilt top. To be honest, I had been dreading this stage and was putting it off. But, we ended up having a really fun time working on it. Jan was in charge of layout and pinning, while I stitched away on my trusty little sewing machine. 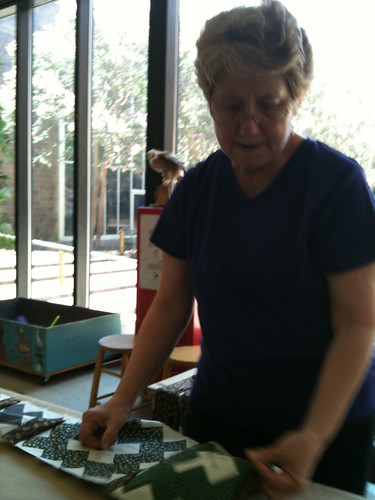 It was interesting to explore all our block donors’ approaches to construction. I’m not just talking hand-pieced vs. machine-pieced. Some of our donors were meticulous piecers – every piece lined up perfectly, all their points worked out nicely with the sashing and every little thread trimmed and tidy. And, then there were the quilters like me – from the front, all was lovely, but turn them over and hello threads, slightly crooked stitch lines, etc, etc. They all work together just fine and really look phenomenal. It was just interesting to see how, even when the same pattern is used, quilters come up with blocks an unique as they are. Fabric selection was also interesting. All the quilters stayed within the parameters of traditional 19th century fabric, but what a lovely variety we received within that restriction!

I know this is going to sound corny, but it ended up being a real honor to work on this quilt top. The fact that people we don’t even know were willing to take the time to put needle to fabric for the Museum was touching. It was also special to have people near and dear to me, like my former college roommate, coworkers and local quilting pals, take part in the project. And, I realized that those feelings were not unlike those that the bride working on the Museum’s historic Chimney Sweep quilt might have felt as she worked her way through the quilt. 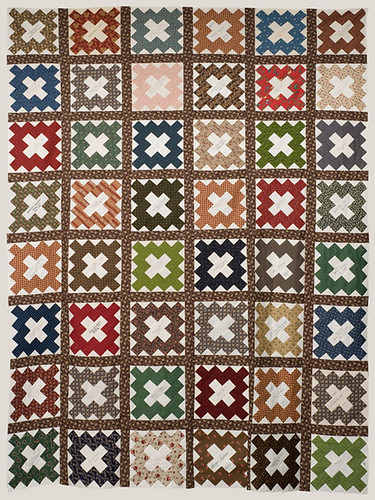 So, what’s next?
Once we get this project basted (again, dreading this part a little), we can start the final and most exciting phase of the Quilting Bee project as our Chimney Sweep becomes a teaching quilt. With the help of Museum volunteers (contact me if you’d like to sign up!) we will have this quilt available to Museum visitors starting in early 2011. Visitors of all ages will be invited to try their hand at traditional hand-quilting with our volunteers’ assistance. We hope you can stop by the Museum and visit our quilts, both the original on exhibit in Threads of War and our group project quilt!

And, thank you to all our block donors once again! It has been a pleasure working with you!