News and EventsGeneral NewsBringing them Back to Life: Conserving Archaeological Metals

Bringing them Back to Life: Conserving Archaeological Metals 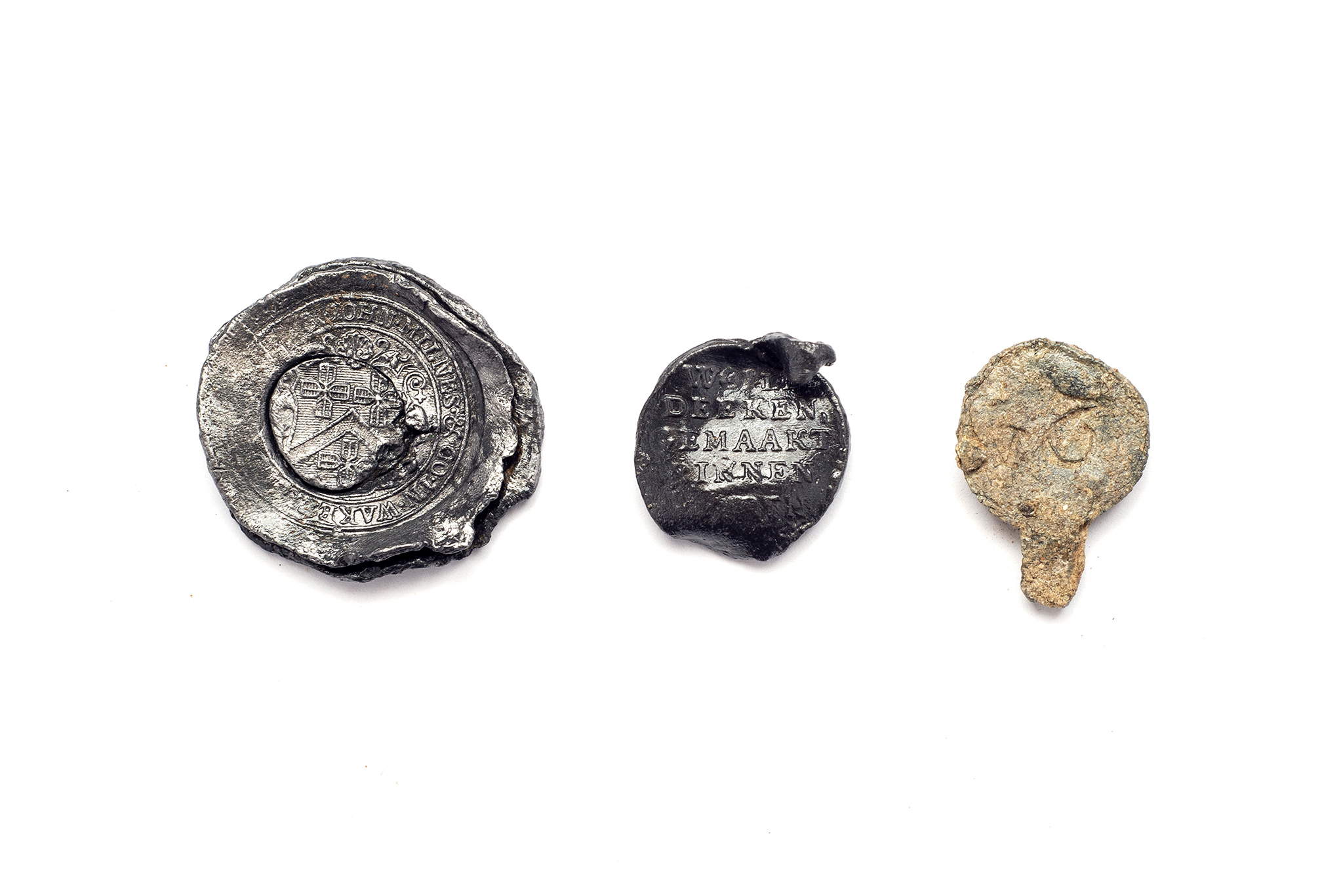 Impressed lettering is legible on two lead cloth seals after conservation.  The third has impressed numbers that are obscured by corrosion.

Faithful readers of the Museum blog will recognize the title from the series of articles by Natural Sciences Curator Matt Gibson, describing plans for our new Natural History gallery.  Staff archaeologist Ron Anthony also brings recovered artifacts “back to life” through conservation and stabilization. The unique chemical and depositional signature of archaeological soils – the presence of oyster shell and lime mortar – in Charleston supports preservation of bone (see the “Animal Bones and Charleston’s Colonial Beef Market” post on faunal analysis). But the coastal soils are salty, and this promotes rust and corrosion of artifacts made of iron, brass, copper, lead, and even silver. This corrosion can continue to degrade the artifact after excavation and washing. Stabilization in distilled water is the first step, but it requires removal of the salts through electrolysis, using an electrical current or through chemical means, to completely halt the degradation. 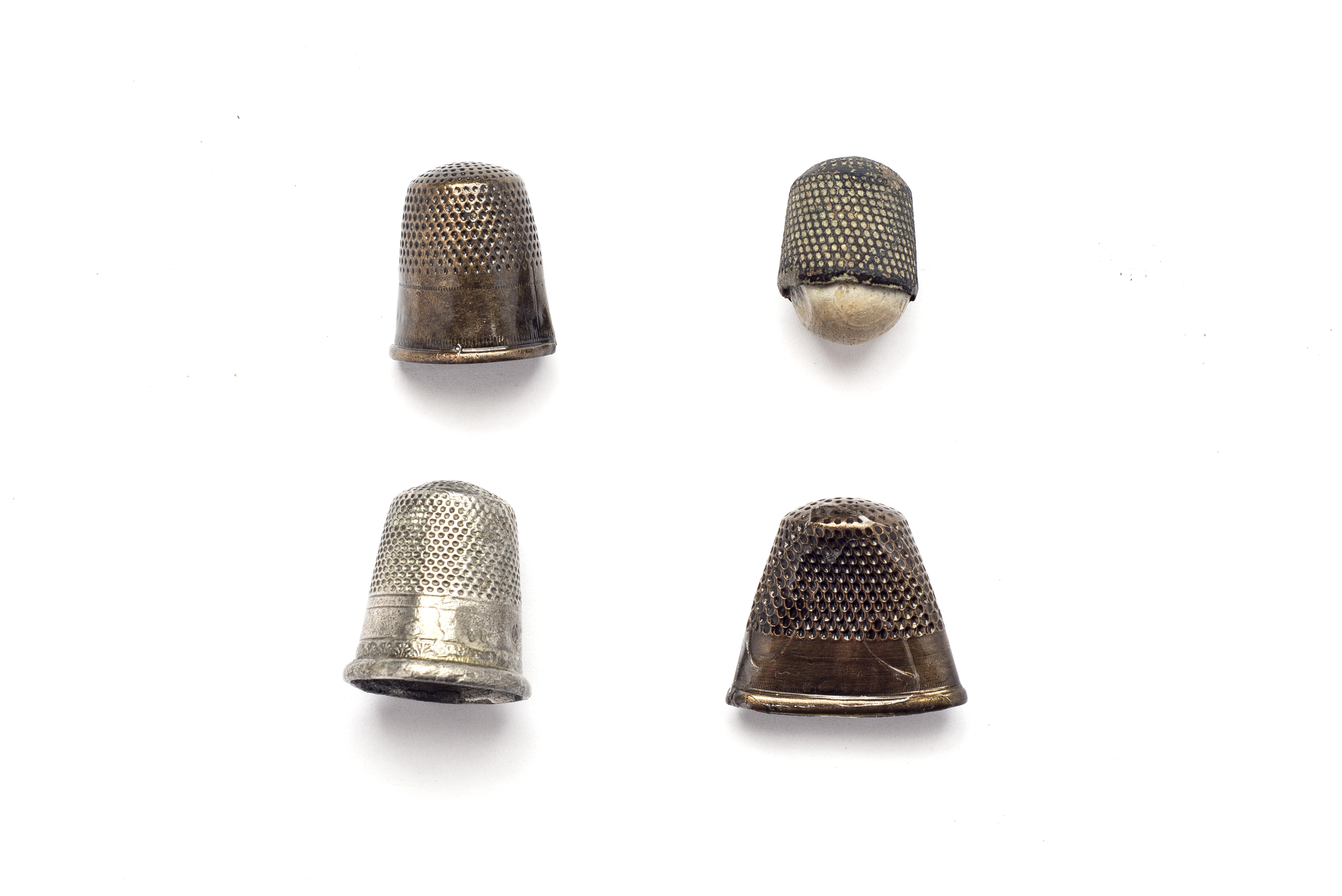 Thimbles of silver and copper from the Heyward-Washington House after conservation. The small thimble recovered from Lesesne Plantation has a clay marble jammed into the end, and was probably discarded for that reason. Because the artifact is compound (more than one material), the object cannot undergo electrolysis. The brass thimble is stable, though, and does not exhibit active corrosion.

Electrolysis is a technique that passes a direct electrical current is through an ionic solution to separate the chlorides, or salts, from the base metal in the artifact. Electrolytic reduction involves establishing a galvanic cell in which the archaeological metal serves as the cathode, and a more noble metal serves as the electron donor or anode. Negatively charged chloride ions are attracted from the artifact to the anode, thus purging the artifact of chlorides. The standard electrolysis system uses inexpensive and readily available materials; a battery charger serves as the power source, sodium carbonate (washing soda), the electrolyte, dissolved in distilled water serves as the ionic solution, and a plate of stainless steel serves as the anode. Steel clips and wire, and a plastic tub complete the equipment list. The electrolysis process for iron, or ferrous, artifacts is a slow one; small objects such as nails remain in conservation for a few months, while larger objects such as solid shot may take a year or more. 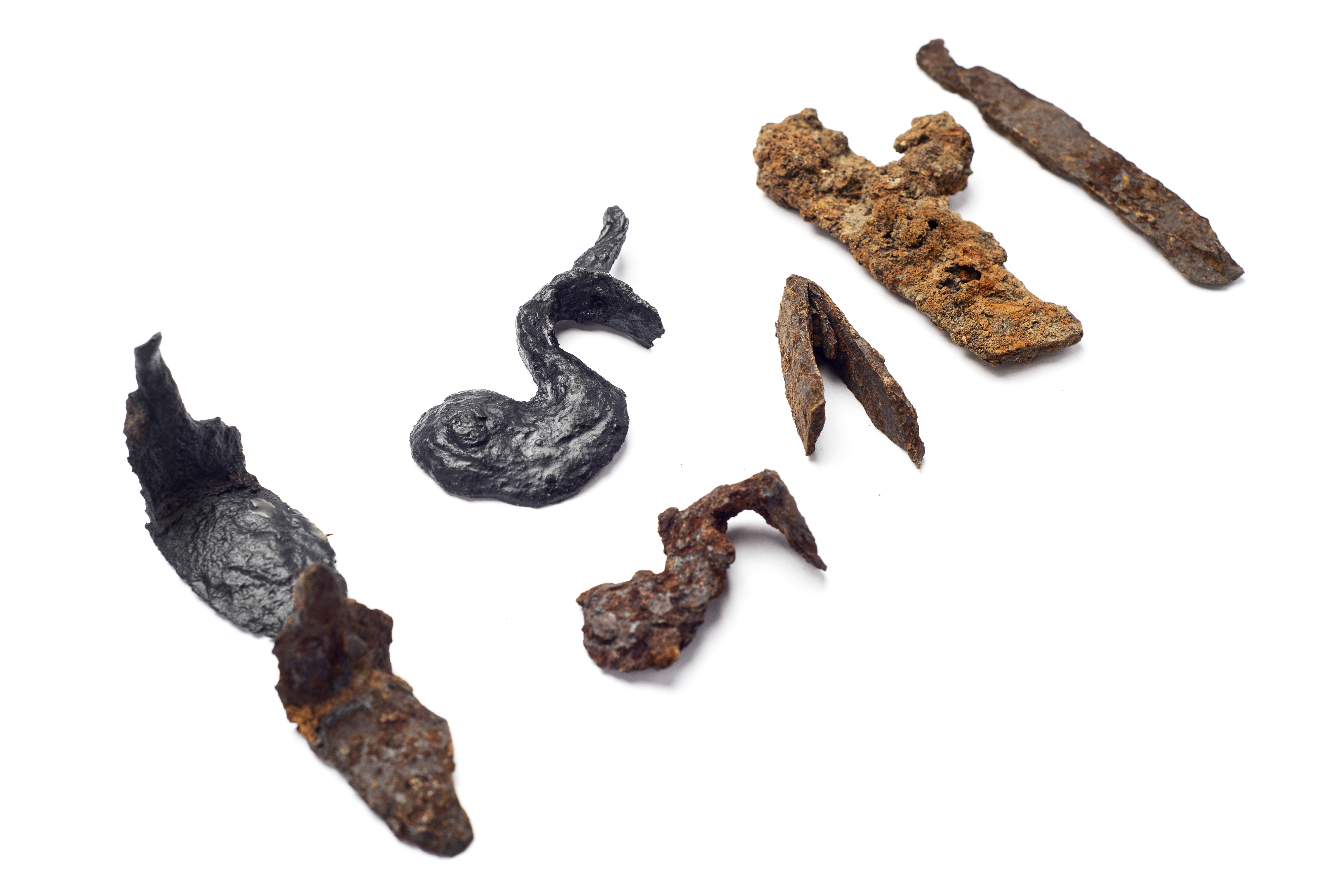 Iron gun hardware from the 1740s Milner occupation of the Heyward-Washington House, before and after electrolysis.

Corrosion often makes the artifact difficult, if not impossible, to identify. Sometimes iron is so oxidized that no base metal remains, and conservation is impossible. Our colleagues working on inland sites recover nails that can be identified as hand-wrought from the 18th century or machine-cut from the 19th century. Those from Charleston are usually unidentifiable and are catalogued that way. Below is a typical assemblage of nails from the Heyward-Washington site, and those from Willtown on the Edisto, further inland. The third set has been conserved. 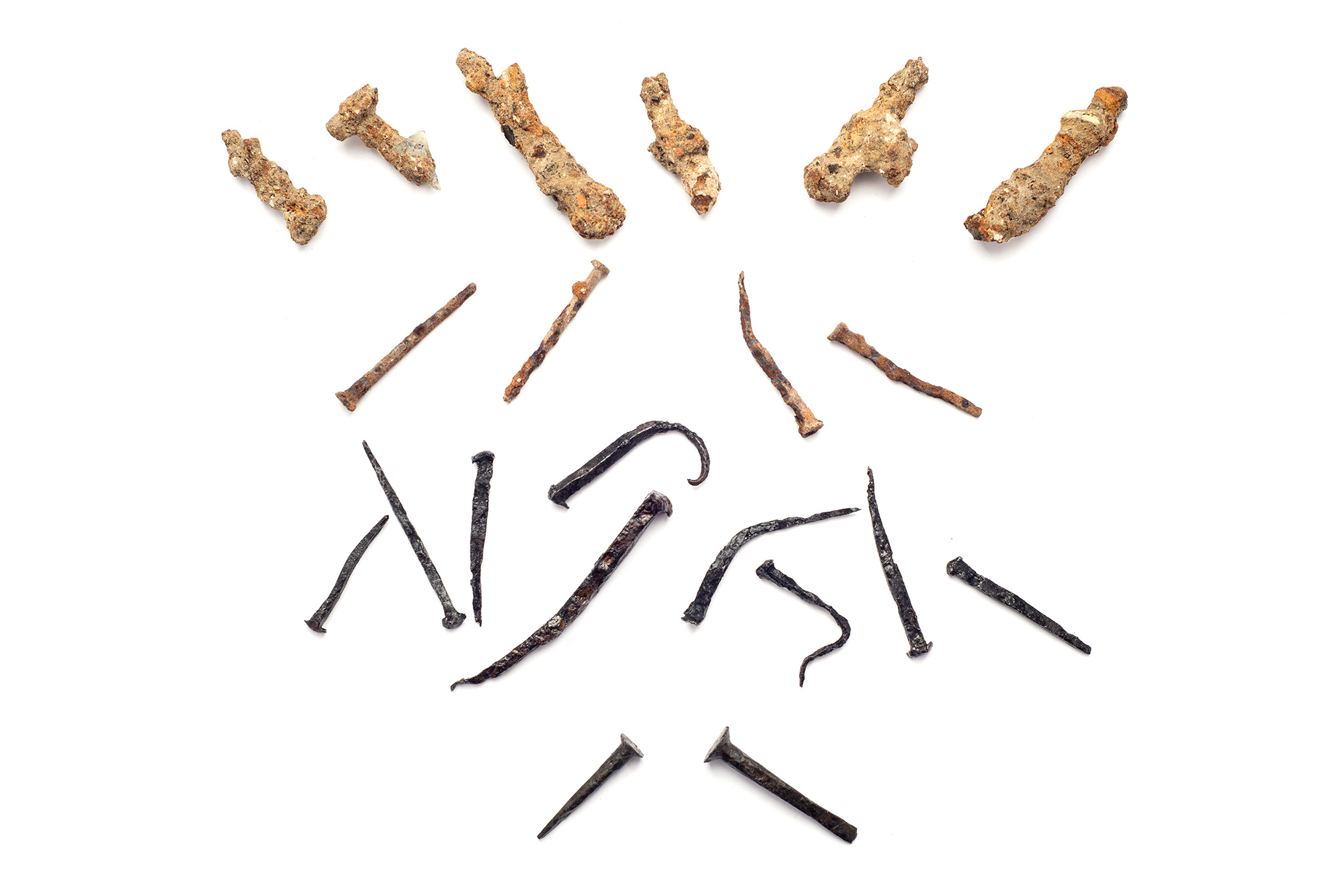 Electrolysis is also used on non-ferrous metal artifacts. Like the ferrous artifacts from Charleston, those of silver, lead and copper alloy (brass or bronze) absorb salts from lowcountry soils. Some are too corroded and fragile to withstand electrolysis, but most can be stabilized in a few days. These objects are then soaked in distilled water and prepared for final conservation stages.

After electrolysis, artifacts need to be sealed from the environment – a final conservation step. At the Charleston Museum, iron is routinely painted with a tannic/phosphoric acid solution followed by a coat of Conservator’s Wax. Other metal objects are sealed via a coating of Incralac. 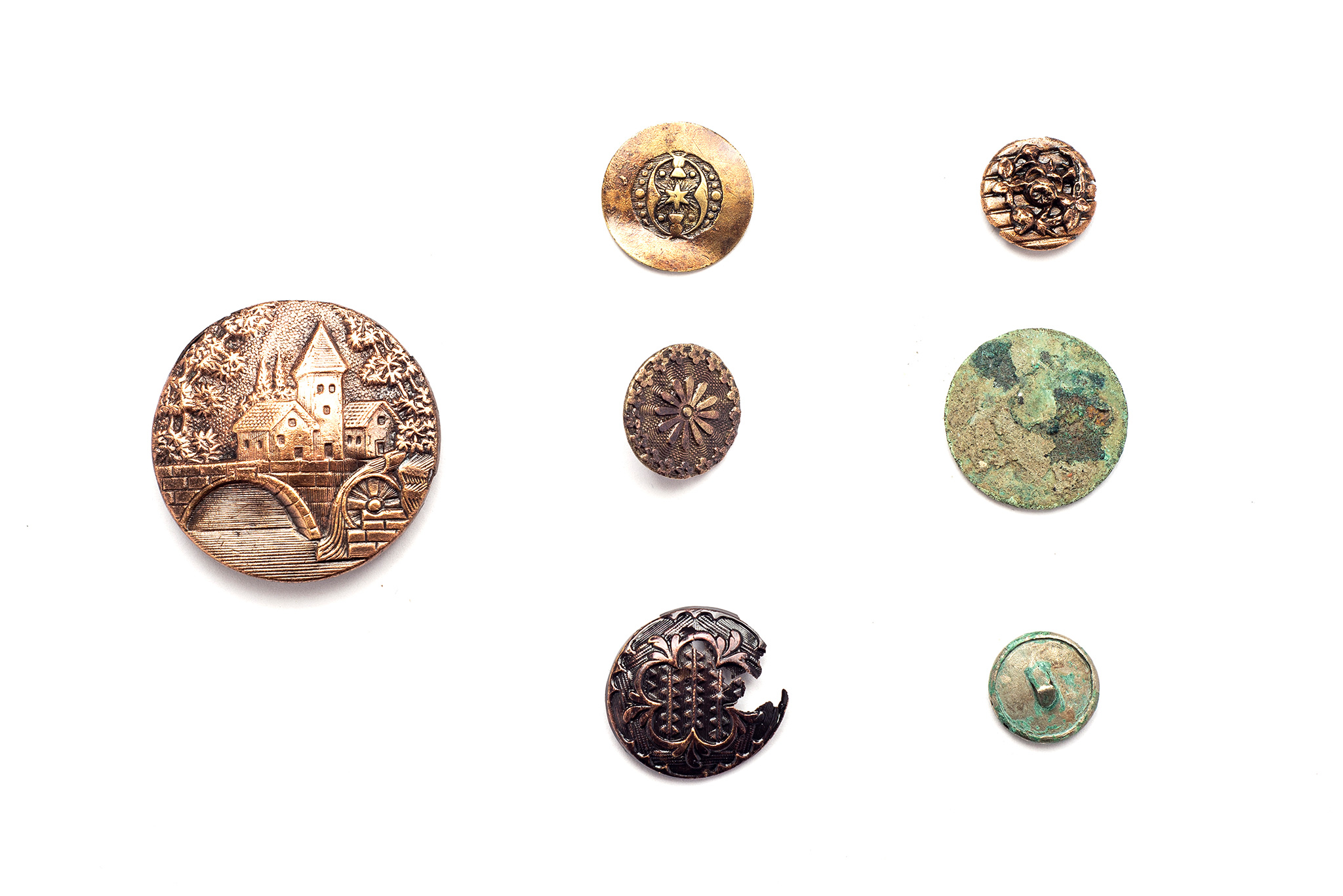 Copper or brass buttons after electrolysis, showing fine stamped and molded detail. The button with the pearl center cannot be conserved because the shell would dissolve during electrolysis. The large greenish disc button is too corroded and fragile to survive electrolysis.

Conservation many times will expose surface detail hidden under the corrosion. Conservation of lead cloth seals from the Lower Market at Tradd Street revealed the marks wool merchants from Britain and Holland. These are shown with a seal that has not been conserved.  Likewise, electrolysis revealed the delicate decorations on these brass coat buttons. All of the archaeological artifacts on exhibit at The Charleston Museum have been conserved in our archaeological laboratory. 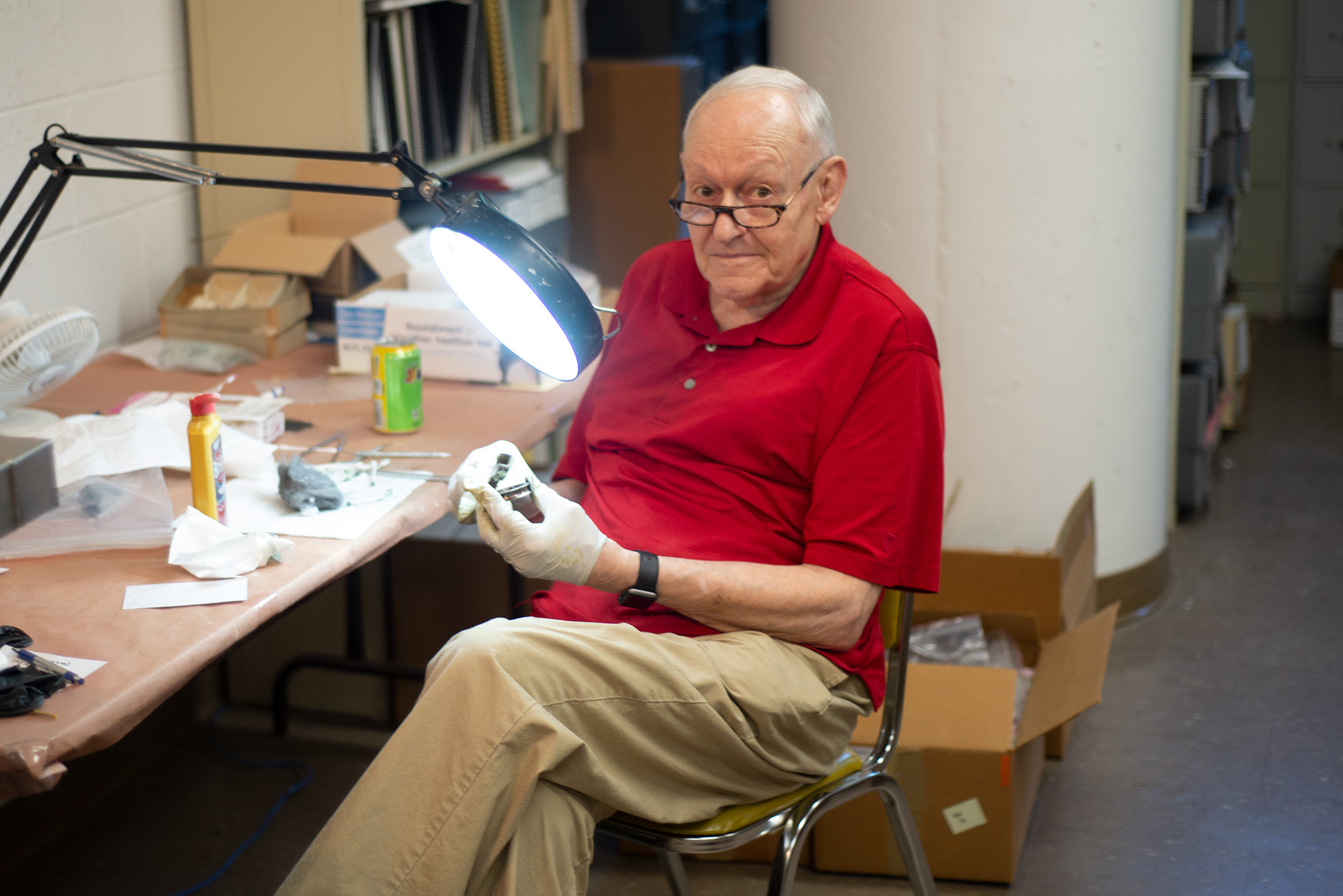 For many years, Museum archaeologist Ron Anthony has been assisted by volunteer and former Board member Dr. Bill Turner.  Bill has completed the cleaning and sealing of many of the copper alloy artifacts shown here.  Thanks, Dr. Turner!