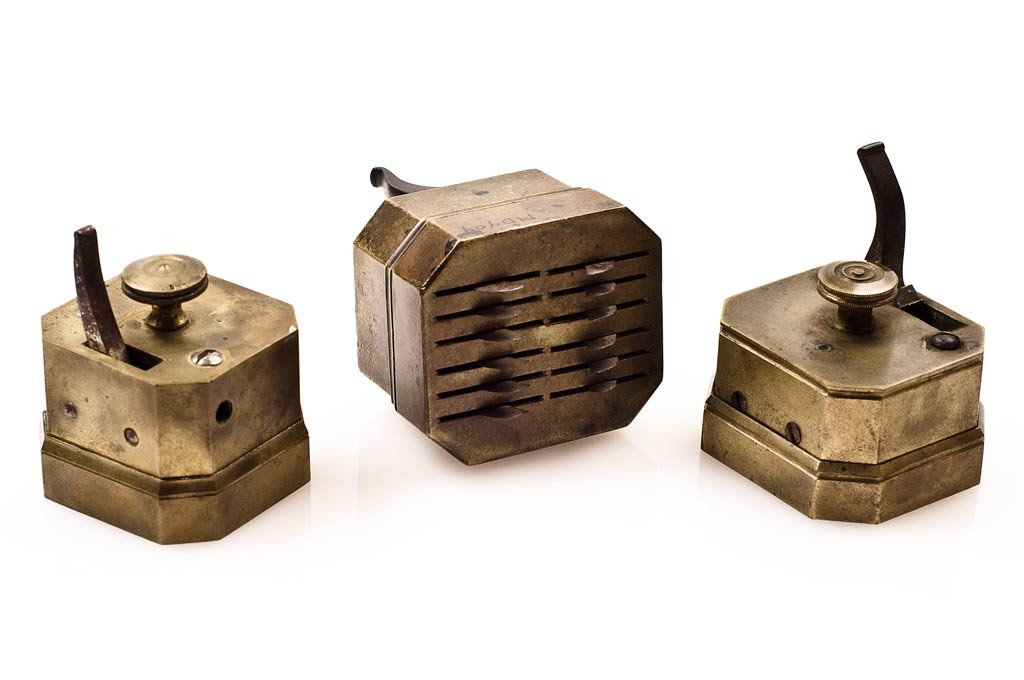 Scarificators with brass casings, 1825-1845. Multi-bladed tools with adjustable penetration depth, each blade springs forward simultaneously at the depression of the side-mounted release button.

Feeling a touch queasy this Halloween? Probably the candy…or maybe too much fetid blood coursing around your insides. Whatever it is, just be glad you can deal with it now rather than centuries ago.

Until the late nineteenth century discovery of microorganisms and their direct responsibility for diseases, most (if not all) western physicians were still following the lengthy, antiquated, and, if nothing else, downright dangerous writings of Claudius Galenus. Commonly referred to as Galen today, he first penned his convictions on what became known as humorism sometime around 180 A.D., a medicinal belief centered around a perceived balance among the body’s four basic fluids (historically referred to as the four humours or occasionally the four temperaments):

As Galen further hypothesized, any imbalance whatsoever in these four humours as they existed within the human body were directly responsible for its illnesses. Therefore, by adjusting manually one — or perhaps several — of these fluid levels, the body could balance out its liquid inequalities, right itself, and consequently fast-track a sick person back to perfect health.

Distributing thousands of written pages on the subject, Galen’s brand of medical procedures by the end of the third century were roundly welcomed throughout Europe, and, amazingly for all its flaws, remained the quintessential blueprint for medicinal science for almost two millennia. 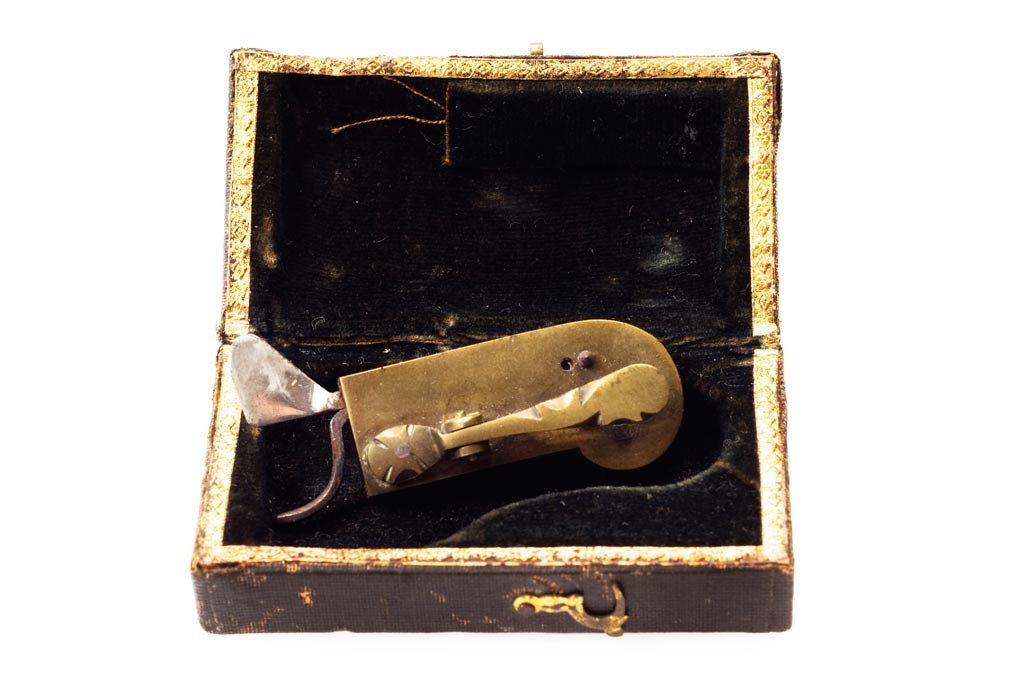 Spring lancet with case, 1790-1815. Steel blade can be cocked backward and then spring-released.

Historically, blood was generally understood as the most abundant of all humours and was, therefore, the one most vulnerable to irregularity. Fortunately, physicians of their day had long been practicing a method by which to fix that, but it wasn’t at all pretty.

Bloodletting — that is, the physical act of draining blood from a patient — was for eons the most common procedure administered for any number of afflictions, and, depending on the seriousness of the malady, was carried out in varying degrees. For those in less critical conditions, they might expect little more than a few strategically applied leeches or a series of superficial cuts by means of a scarificator. These small mechanical devices, usually brass, worked with a set spring that, when released by way of a pushbutton, swiped a series of small blades into and across a patient’s skin. Though the resulting lacerations bled plenty, they were small, shallow, and healed easily. 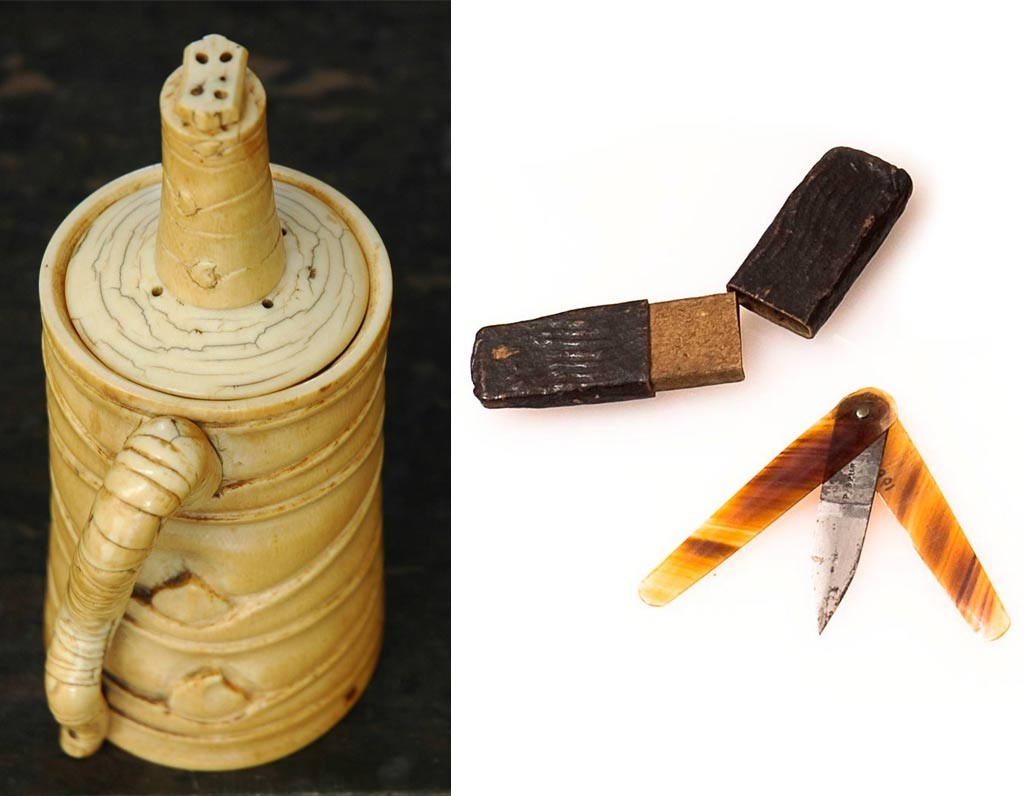 (left) Leech jar with spout, 1870-1880. Carved from ivory, the body resembles a bandaged limb while the handle depicts a gorging leech. (right) Lancet with tortoise shell sheath and case, 1780-1800, used for manual “breathing” of veins.

Others in more serious states of physical welfare were, in turn, prescribed far more invasive (not to mention more painful and no doubt messier) “venesections.” For this, physicians employed large-bladed lancets or worse, multi-bladed “fleams” that today, somewhat resemble modern pocketknives. The razor edges were placed over larger veins within the inner forearm or elbow and, once in position, the fleam blade’s backside was struck with a stick or light mallet, the resulting puncture of which allowed for the proper and sustained “breathing” of veins.

Now, no matter what degree of bloodletting the average physician administered, nor how much actual blood he collected over the predetermined timeframe, obviously it was his patient’s hope that a speedy recovery would be the result of it all. Alas, that wasn’t always the case.

After suffering either a seizure or a stroke in February 2, 1685, English monarch and Charleston’s namesake, Charles II underwent a near weeklong bloodbath of sorts at the hands of his fourteen royal physicians. Within the first hour after his collapse, Charles was drained of just over sixteen ounces of blood from his left arm. Unable to ascertain any improvement in his condition, however, doctors decidedly went ahead and drained another eight ounces, this time from a series of three incisions in Charles’s shoulder.

In retrospect of course, it would have been much better for King Charles had he just laid there unconscious, but as the day dragged on, those around him came to believe their aggressive treatments to be working. They attacked again, and, this time around concluding that perhaps his other, non-blood humours were off too, spent the next few hours recklessly administering enemas and at least one “volumous emetic,” a what is now known to be a toxic potassium compound that sent the poor king into a fit of “retching vomiting.” To top off their day’s work, an extremely painful application of camphor was applied to Charles’s head. This paste, besides blistering the skin it touches, goes on to cause uncontrolled and frequent urination when absorbed.

Sadly, Charles II underwent three more gory days of forced enemas, purgatives, desperate impromptu concoctions that included “40 drops of extract of human skull” and one “gallstone of an East Indian goat,” and, of course, bloodlettings — a pair of which involved his jugular vein. It’s been said that by the time he died on February 6, his body was almost completely bloodless, his skin resembling dry and wrinkled fabric.