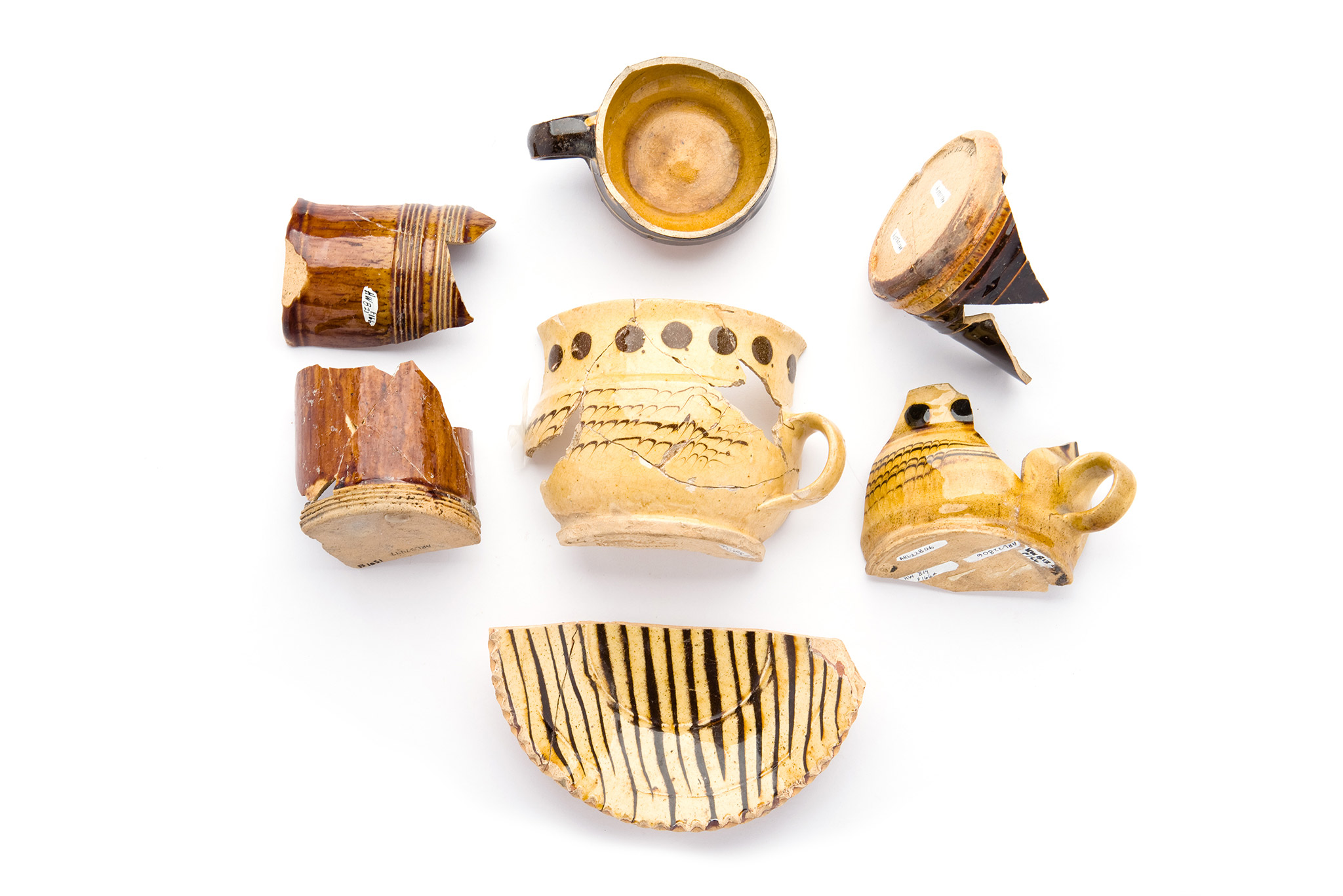 Cooking vessels and drinking pots from the 18th century, typical wares recovered at the Beef Market.

A most interesting newspaper article recently circulated on social media made for entertaining and enlightening reading on a rainy afternoon:

Considerable excitement was caused on upper King Street this afternoon by the stampede of a herd of cows which soon included several horses hitched to wagons in the street, and for a time the whole thoroughfare was on the move.  Not only did the street itself seem to be moving, but with the wild animals invading several of the stores, things were lively within as well as without, and it is understood that no small damage was done before the wild animals were all gotten out of the stores and again started for the slaughter pen to which it is understood that the cows were destined before they took fright.

The entertaining aspect of the story is clear enough.  The enlightening part is this: the incident took place in 1911!  Cattle were trailed to market, entering the city along King Street (the Broad Path) from the earliest days of the colony. That such drives continued into the early 20th century surprises many, reminding us how far we have come from our agrarian roots in a relatively short time.

In the 18th century, many of the cattle brought down the Broad Path were destined for the Beef Market at the northeast corner of Broad and Meeting Streets.  Prior to the 1730s, cattle arrived at the City Gate, and many were slaughtered just outside that entrance.  Charleston’s earliest market established in 1692 just inside the wall, and was an informal venue.  A new brick market building was constructed in 1739, abutting Broad Street.  A larger building, constructed behind it, opened in 1760 and was re-named the Beef Market.  The market burned in a massive fire of 1796, and was not replaced; by then the character of Broad Street was changing, and the “low dirty-looking market for beef” was no longer a welcome establishment.  City Hall was constructed on the site in 1800, and that massive building sealed the remains that became one of the city’s most significant and fascinating archaeological sites. 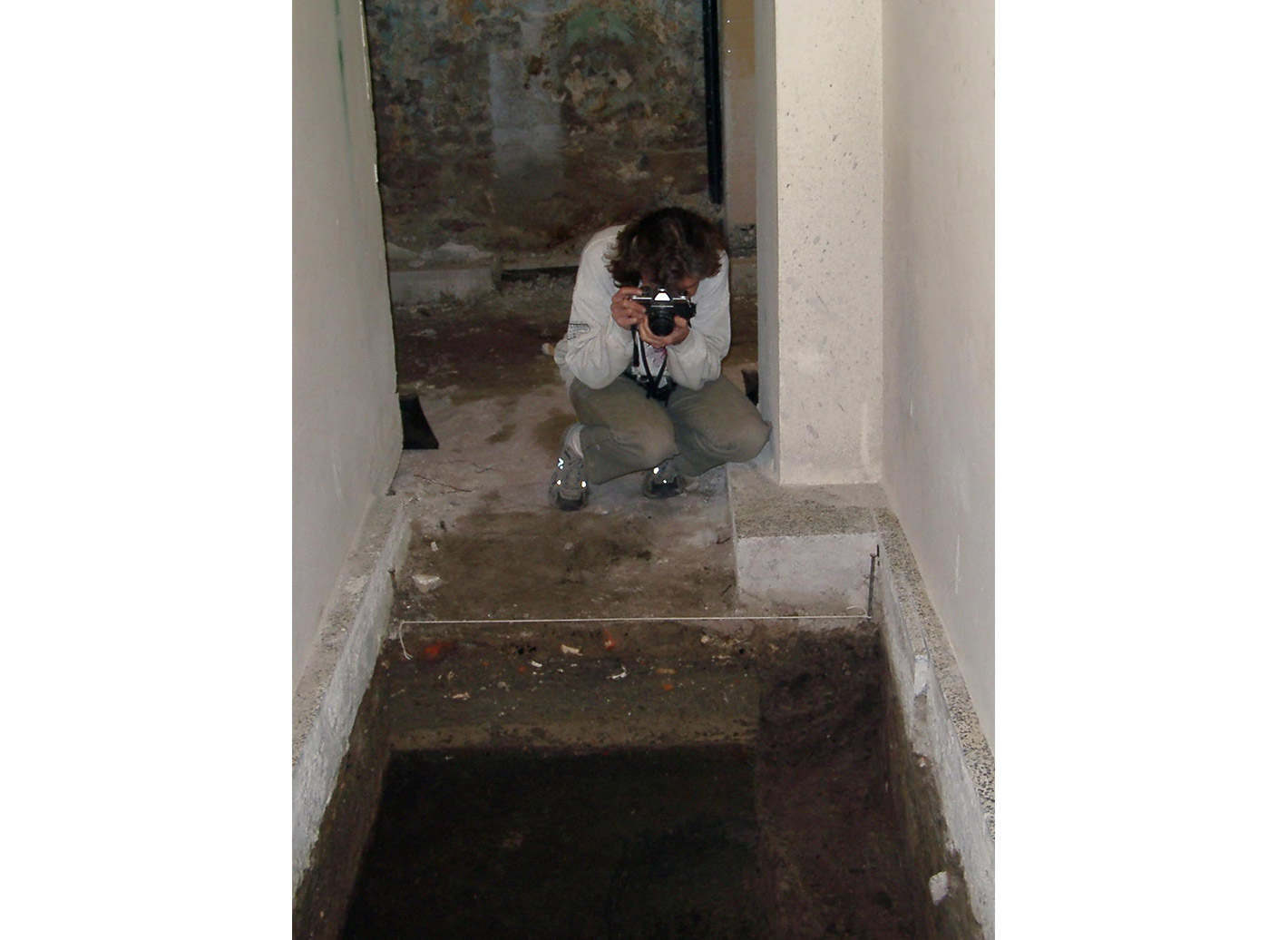 Excavating in the basement of City Hall meant working in tight spaces.

The Museum’s special exhibit, To The Bone, highlights the materials and information gleaned from excavations of the Beef Market in 2004.  We excavated in the basement of City Hall, as renovations were underway, encountering remarkably-preserved evidence of the 18th century market.  We recovered bones and food-related ceramics from the three market eras.  The earthenware cooking pots, wine bottles, and glassware suggest that the market was a vibrant public area, one used as a public gathering space where residents might visit and converse and perhaps share refreshment, as well as buy and sell wares. 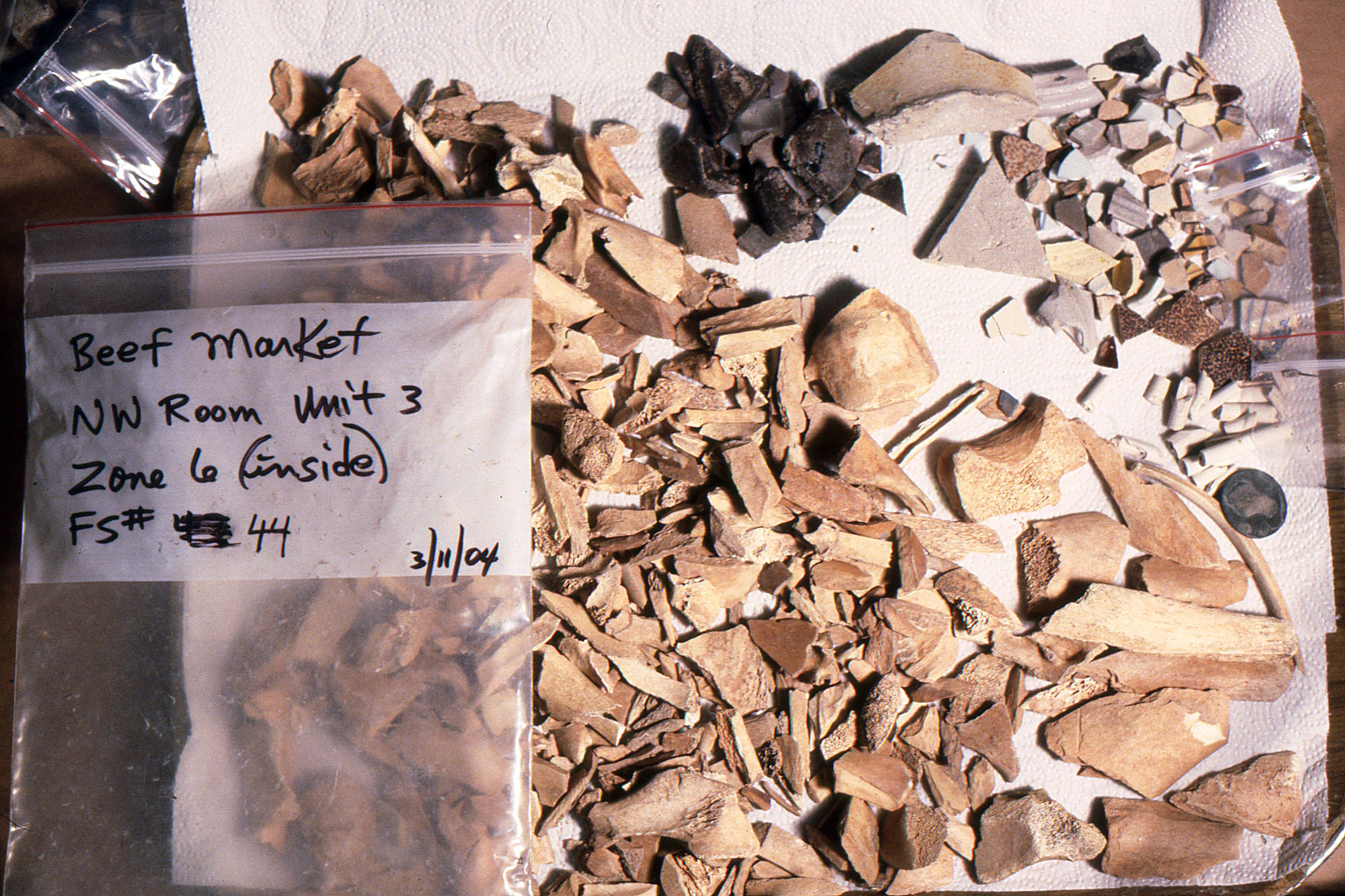 The ten layers of soil were filled with fragments of animal bone, many from the cattle brought to market.  The standard cuts of meat we know today were not developed until the late 19th century.  Charlestonians used many parts of the animal no longer considered desirable, including the head and tongue.  Butchers used long knives, cleavers, and saws to cut different portions of meat, and archaeologists can identify the tool by marks left on the bones. 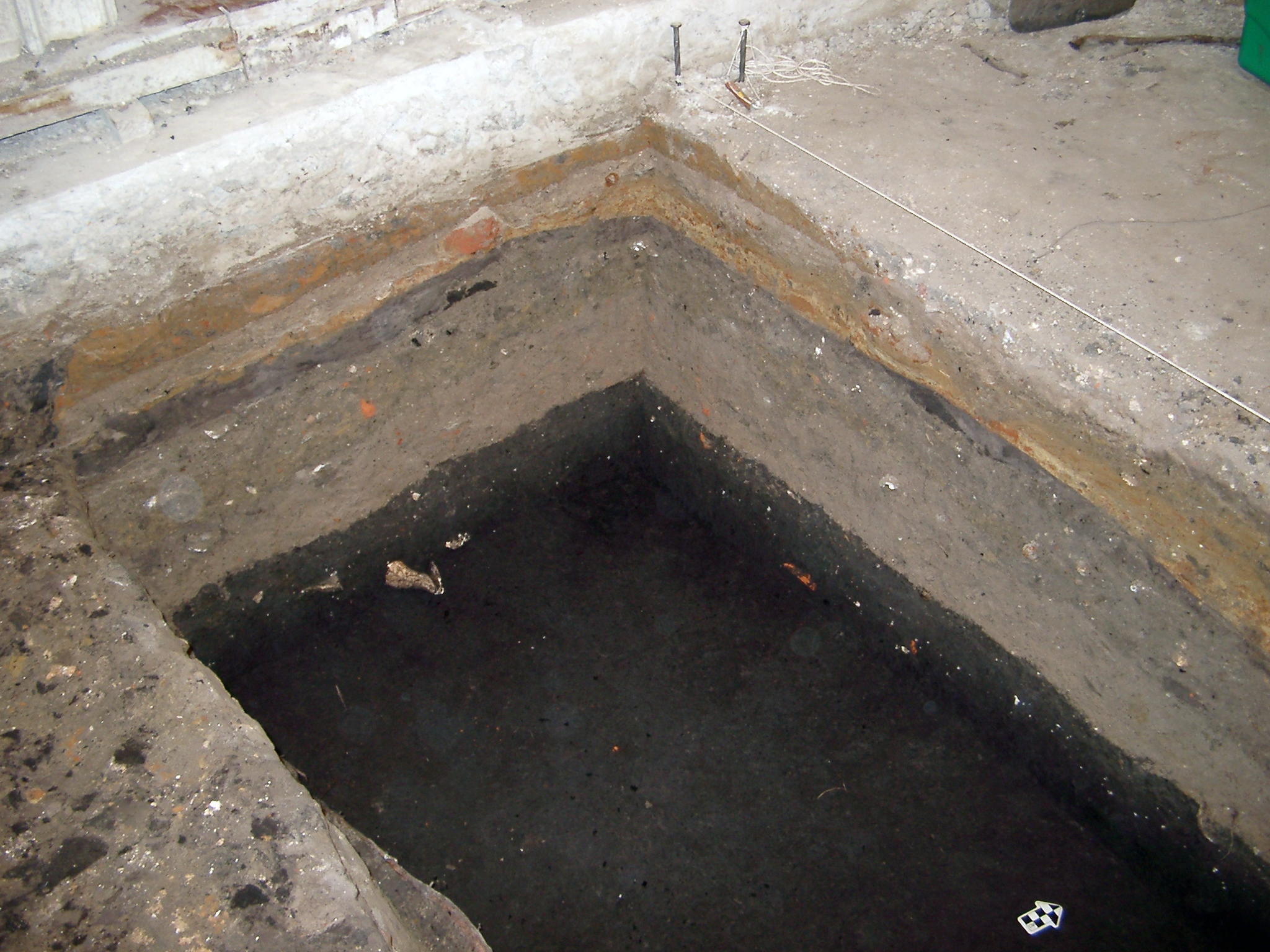 The many soil layers range from dark, mucky soil from the 1710s to an orange clay floor level from the 1760s.

Cuts are small incisions across the surface of a bone, made with knives as meat was removed before or after cooking. Small striations on the edge of compact bone indicate that a specimen was sawed.  Saws produce smaller, individual portions, like the steaks we enjoy today.

Hack marks are evidence that a larger tool, such as a cleaver, was used to dismember the carcass before the meat was cooked. The Beef Market was filled with hacked bone, including a layer of water-washed sand filled with tiny fragments of bone. This layer likely reflects debris washed out of the market, as part of daily cleanup. Other layers contained larger fragments of hacked bone, and one deposit contained a cleaver, the only one recovered in Charleston. 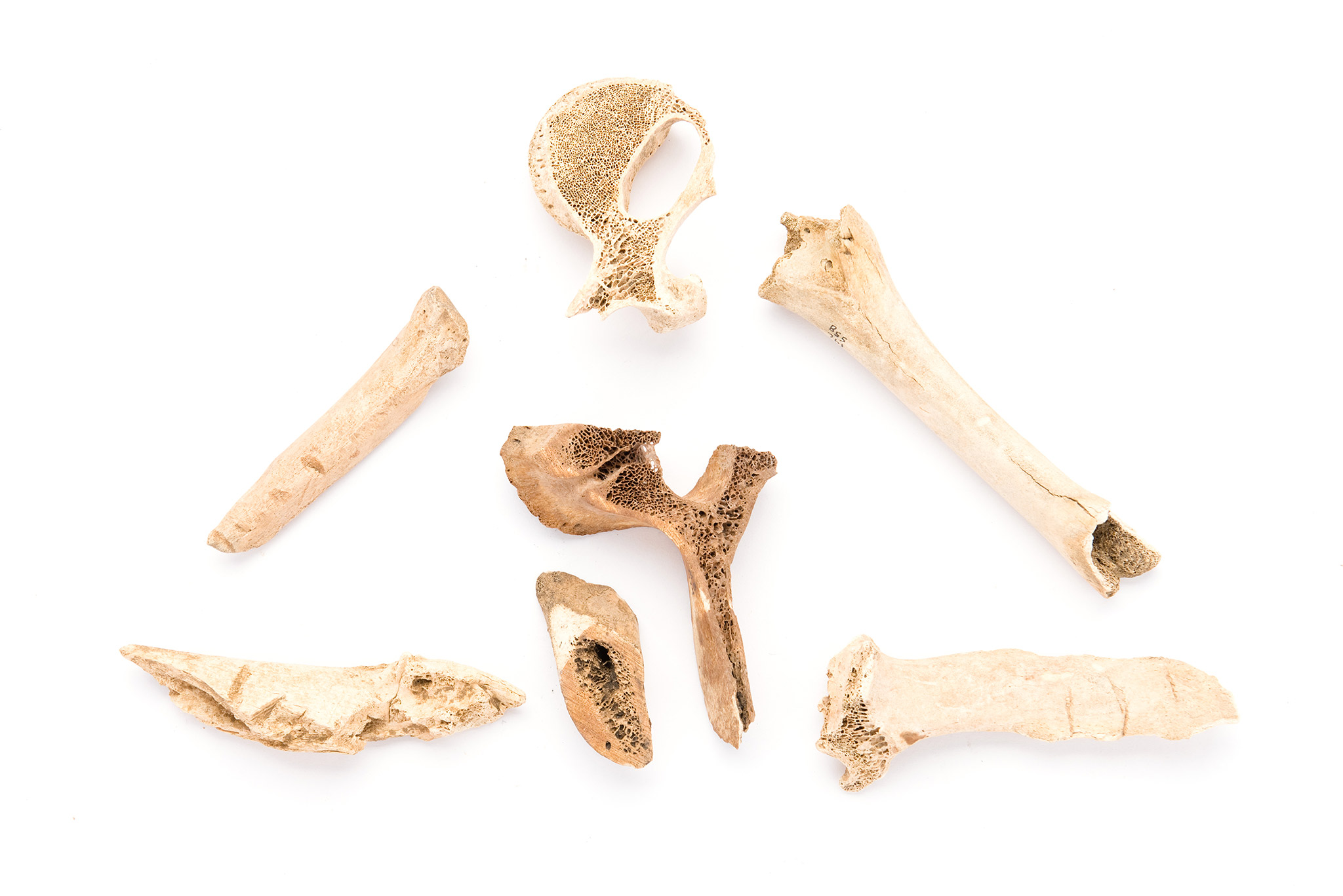 The recovered animal bones also reveal that beef was not the only meat sold in the market.  The remains of pigs, sheep, goats, and chickens were sold at market. Wild animals, including fresh and saltwater catfishes, drums, diamondback terrapin and sea turtles, increase in proportion through time, despite the new designation as Beef Market. All of this analysis was possible because the beef market site was preserved beneath the massive foundations of City Hall.

*thanks to Josephine Humphreys for posting this article from The State, March 6, 1911